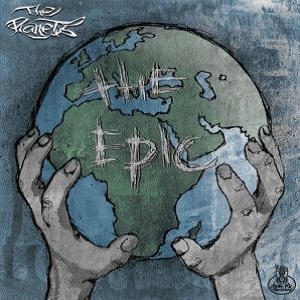 The Planets :: The Epic

Already well known in the orbit of their native United Kingdom, The Planets have not yet hit the apex of their fame worldwide. Nomadic Poet and Ayman Raze first smashed the scene with their “Circle of Light” EP in 2000, and followed up with hit singles like “Global” and “High of Life.” All of this hard work culminated with “The Opening” LP in 2002, yet they still remained largely unknown on the other side of the Atlantic.

The time has arrived to expand their fanbase and bring their skills to a larger audience outside Europe, and the “Epic” EP is the first salvo in this battle. U.S. audiences should probably listen to a few Slick Rick records first to acclimate themselves to the strong accent. To soften this blow the lead song “Trees” feels like a Kanye West beat, with R&B soul fed in at high speeds. Meshed with the wisdom of The Planets, it’s a powerful combination:

“My mentals are like forests
Many branches of knowledge, build blocks or be abolished
We drop life like acorns, +Break Atoms+ like the Main Source
Before we’re hacked down by rusty swords
The vines tried to choke my roots
But the foundation is too deep, overly immersed in truth
The sunlight shines to block Lucifer’s views
and turn the leaves on the frees – into forbidden fruits
Move with caution, before I lay in a mahogany coffin
Birds sing from treetops – seems they have forgotten
How I used to whistle in the breeze
The air touch my spirit, to set my soul free”

To give them a U.S. connection, Prince Poetry makes a cameo appearance on the song’s closing verse:

“I stand strong beyond the surface of earth
My nappy roots nurtured birth from the dirt, givin it life
Love ain’t all what it’s worth, the sun bring, happiness and the hurt
Holdin my ground, Po’ not the kind to merk
So let the rhyme do work, it flows free like wind by the sea
I touch a soul with the gems within me
Cats be consultin the hype, while I’se controllin the mic
Prince Po’, chosen to fight throughout the cold and night”

Things pick up pace with strong drums and quick piano riffs of the aptly named “Moving Along.” Lest there be any doubt what The Planets are all about, they lambast “liars wearing, fake diamond bootlegs” while derisively dismissing rap competitors with the words, “They’re soft like souflees/you got a briefcase of rhymes? Well guess what, we pack a suitcase!” By this point, even the hardest of skeptical New York and L.A. audiences would have to recognize that Nomadic and Ayman pack skills that mix the humor of Celph Titled with the wisdom of Aceyalone. Too esoteric? It probably should be, since the “Epic” EP is clearly meant for an underground rap head audience.

The one hint of a crossover maneuver here is the guest appearance of Junior Reid on “Full Metal Jacket” – but even that has a reggae slam far harder than the radio playable music of Sean Paul. Rounded by the songs “Essence,” the CD exclusive track “Stop,” remixes of “Trees” and “Full Metal Jacket” PLUS instrumentals of all seven tracks, this “Epic” EP is bound to shine brightly on shores worldwide. Look to the heavens and scan the horizon, because at long last The Planets have arrived.