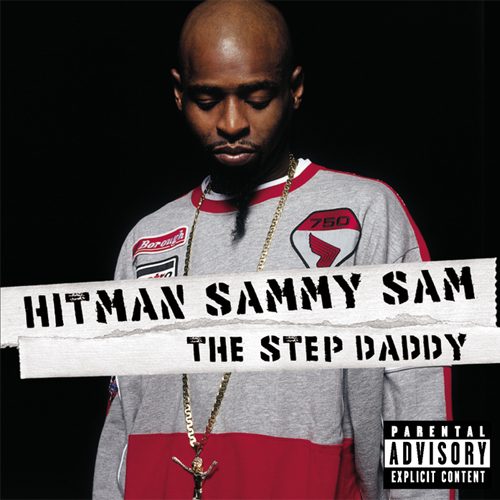 He’s Atlanta’s self-proclaimed most “bout it bout it” rapper, and no he’s not even a member of The New No Limit. This is Hitman Sammy Sam’s national debut, but he did make some noise before with the regionally popular “Last Man Standing” in 1998 on Big Oomp Records, which was followed up by the single “Knuckle Up” for said same in 2000. Obviously despite some success in these areas, Sam recognized he would forever remain a regional sensation at Oomp, and inked a deal with Universal Records to go national.

Most rappers going national are looking for a gimmick to get their shit well known coast to coast, and Sam’s is that he’s “The Step Daddy.” Both the title of his album and the first single, it’s an odd topic for an uptempo club type song. Sam battles with a brood of children as he tries to restore serenity and order, while they taunt him mercilessly:

As strange as the idea behind it is, the call and response between Sam and the kids and the interpolation of “Double Dutch Bus” on the track combined together are enough to get this song over. That’s not necessarily true with the rest of this album. Sam varies between trying to thug out as much as Ja Rule and be as loud and hard as Bone Crusher or Pastor Troy. In fact Sam seems to feel Troy stole his entire style, even though Sam has SOMEWHAT more intelligent lyrics and a more up-tempo flow. He puts both to good use on the song “Uh Huh,” where he’s calling Troy out for the alleged jack move:

“Fin’ to gather my niggaz, some gorillas, some bout it niggaz
Fin’ to make one call, they comin to getcha, got ‘im nigga!
Told dem Diablos take a chill, I got dis here
Dey stay in the crowd, searchin for me, I’m over here
Swear to God, I ain’t runnin, ain’t never been scared of no busta
You phony as hell, I’m A-T-L, you from Augusta
We take this shit boys you want me to call all yourself
We can WCW Nitro, and I take dem damn belts”

Most of the time though, Sam just retreads the tired topics of rap’s least interesting gangsta rappers. Is it any surprise that he has a song called “Thug Life,” or that he brags about “clips [..] wrapped around my chest like Rambo?” Sam doesn’t distinguish himself here by bragging that “ain’t nothin but death gon’ stop us,” and that he “sleeps with my gat.” In fact for a rapper who finds being imitated so offensive, the song comes off as a mixture of 2Pac and DMX – the least interesting parts of both, that is.

Generic thuggerism is in the end this album’s chiefly defining trait. From “Keep it Gangster” to “Got Gatz! Got Cash!”, Sam keeps talking about how hard he is, how much money he’s got, and feels free to keep crowning himself with titles like “King of the South” that while admirable in their confidence seem remarkably unearned even compared to thugged out Southern rappers with similar steez. He hasn’t proved he really is the best among them with this album. The production by Beat-In-Azz, Rodney Hill, Devin Johnson and Lil Werm among others helps to give this album a basic level of boom beats that raise it slightly above mediocrity, while songs like “It’s Summertime” that have a tight G-Funk sound are the exception as opposed to the rule. While this and the title track might both be good hits for Step Daddy/Hitman Sammy Sam, it still doesn’t redeem an album that’s at best a momentary distraction from the next uninteresting thug.