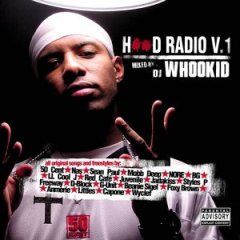 Whooooooooooooooo, KIIIIIIIIIIIIIID! Whether or not you’ve ever bought one of his mixtapes, odds are better than not you recognize Kid’s trademark shout and signature loud gunshot at the start of every song. If you’ve ever tried to download the hottest new freestyle from 50 Cent, Jadakiss, Mobb Deep or Nas from the internet (especially one that disses the shit out of somebody) he’s all on that like flies on two week old dog feces. In fact, sometimes it stinks like that. People really don’t give a fuck about HIM, it’s the rappers that they want. It’s hard to deny though that Kid has his finger on the pulse of some of rap’s most thugged out MC’s, and his “Grand Theft Auto” mixtapes are widely dubbed from coast to coast.

Now it seems that Kid has decided to take his burgeoning fame to that DJ Clue and Tony Touch next level, and release an OFFICIAL mix tape available in legit retail outlets. “Hood Radio V.1” is a little ambiguous though – is it version one, or volume one? Not that the title ever matters with a WhooKid mix though, it’s all about the freestyles and limited edition songs that won’t be on the albums of any rappers who appear on it. You want these songs? You have to buy Whoo’s shit, kid. Without a doubt, some of them are definitely worth it. 50 Cent’s “You Want Beef With Me?” freestyled to the beat of Black Rob’s “Whoa” is a hot way to start things off, and it leads right into the 50 Cent and Sean Paul collaboration “Ya Not Ready.” The Mobb Deep and Littles collaboration “Burn Something” has some of rap’s most lethal ivory keys, and Noreaga’s freestyle is typical of his steez – as much or more about the strength of his charisma than actual lyrics; though these aren’t his worst:

“These lil’ niggaz actin like they even iller than me
Muh-fucker, y’all niggaz ain’t no killers than me
Ask Mike Livghty, I had niggaz shook
They call me Hit Hard NORE from the way that I hook
And I’m a +Violator+ for real, before I knew Chris
Before, ‘Banned From TV,’ my shit was swish
Aiyyo and I can handle any beats, I rock any beat
I stay alive and get head on any street
If I started it all over I’d be signed to Def Jam
Naw, fuck am I sayin? Nigga I am!”

With WhooKid’s tapes, it’s these freestyles that always make or break the mix. Some are aight enough, like Jae Hood’s “I’m a pimp; minus the gators and the hat/ Catch me pushing a El Dorado with your chick in the back” minute and a half of repping for D-Block. The problem is that Kid relies on these underground thugs TOO MUCH. Many of them like Red Cafe and Q Da Kid would be unknowns WITHOUT Kid’s tapes in the first place, and listening to their raps it’s not hard to see why. If you in with Whoo though it’s your ticket to fame and a record deal, because even the boring half-hearted raps of Q seem to have landed him a deal with SoSo Def and Jermaine Dupri:

“Q D-A K-I-D
Knucklegang legendary I’m sorta like Ali
Hustle game tight I’m like God to these fiends
Custom Range white, stuntin wit a hard lean
Money’s exactly what the Red Dot Squad is seein
Brand new Benz but the McClaren’s what I oughta be in
But until things pop for me
I’ma cook raw do whatever I gotsta eat”

Make no mistake, the only good thing about this freestyle is the fact it’s set to Jay-Z’s “Blueprint 2” beat. When you look for freestyles on “Hood Radio” you’re generally better off sticking with the rap names that are known OUTSIDE the five boroughs of New York: Prodigy, Nas, Capone, and the Haitian slang stylings of Wyclef Jean show up for cameos. And if you’re a 50 Cent fan, there’s plenty of material from him and his click all over this album. Besides the pair of tracks already mentioned that start “Hood Radio” off, there’s a “Live & Die” freestyle, a humerous 50 and G-Unit duet titled “We Run These Streets”, and a Tony Yayo freestyle (get out soon Dunn). There are also tight exclusives, among the best of which is B.G.’s “Hydro.” Yes, THAT B.G. – this is not a fake East coast version of Magnolia’s dirtiest. Speaking of New Orleans, Juvenile has a cameo on Red Cafe’s “Bounce,” but sandwiched between him and Q Da Kid on a less than stellar track this cameo is almost completely wasted. You’ll want to check for better surprises, like Nas and Daz collaborating on the “Keep Goin'” beat, Beanie Sigel’s smooth “In Philly Speedin'” and Prodigy’s “New York New York.” At twenty-nine tracks and nearly 70 minutes of music, Whoo Kid does offer good value for the dollar, and still manages to pull off impressive feats like getting LL Cool J to show up and drop a menacing verse:

“Still, radio niggaz wanna, front on the G.O.A.T.
Even though I blow on every corner, like ‘dro smoke
I’m officialness, thug niggaz whistle this
Pucker lips, fuck a bitch while I’m rippin this
I’m hot without the nine, fuck ’em, besides I’m 2 G
And motherfuckers bought the G-O-A-T
Underground like a casket; on my own dick forever
And show no mercy for ya bastards!”

The best news about “Hood Radio V.1” is that unlike some of Kid’s less legit bootleg shit, there’s an all around higher quality of beats, freestyle raps, and exclusive material. The worst news about “Hood Radio V.1” is that like any Kid mixtape, there’s still some shit that spends more time “thuggin and buggin” than Rodney Mack. Kid’s shoutouts are less annoying though than his rivals Clue and Flex, and that alone counts for something. If you’re already a fan of hardcore, grimy, dirty street rap from the Empire State this CD will get your mojo on, and thanks to 50 and others may even reach mainstream appeal – which is more than you could ever say for a Q Da Kid album.