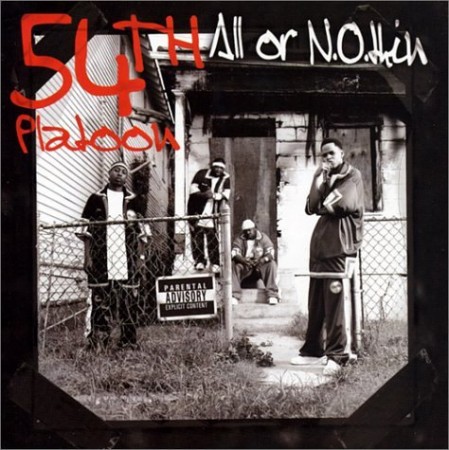 Since releasing the well-received “Good Life” compilation album with hits like “Fatty Girl” by Keith Murray, LL Cool J and Ludacris in 2001, one might have expected the next move from FUBU Records to be a blockbuster. After all, the founders of FUBU (for the know-nots, it means For Us By Us) have never been known to do things small. Their company’s distinct logo has been the bold front and center of their clothing line and synonymous with urban culture (or trendy adopters thereof) for a decade. It was wielding that power of name recognition that made their upstart label instantly viable as a major player, and got their debut release into stores nationwide.

The choice of 54th Platoon as their next big thing must then be a surprise to industry insiders, who probably expected them to woo away a big name artist from another company and watch them shine together. Instead the New York based company has dipped straight into the 9th Ward of New Orleans for some down South hip-hop. The group itself claims their 5 and 4 add up to 9 while simultaneously saluting the all-black 54th Regiment of Massachusetts – a group given notoriety by the 1989 film “Glory” starring Denzel Washington and Matthew Broderick. (The author of this review makes no claim as to the historical accuracy of the film, and regrets that it takes Hollywood to bring to light important chapters in American history which SHOULD be taught to every school child.)

Now that you know their label and their name, all that’s left is to see if “All or N.O.thin” lives up to the hype. Their lead single “She Like” has been getting spins nationally, and Evelyn Champagne King’s “I Think My Heart is Telling” would seem to justify it. Jason Brown’s beat uses this classic soul track to form the backdrop, while her vocals are cleverly worked into the chorus when the 54th Platoon says “As soon as I get home she like” followed by a series of crooned “ooohs” and “ahhhs.” Sadly you won’t find this song on any of her greatest hits albums, and 1979’s “Music Box” is out of print (searches only turn up a 1993 album of the same name by Mariah) so this is as close as you’ll get to the source. To be honest, King is more distinctive than any of the four artists herein: J.S, Big Nut, T.L. and Nu Black. There’s no clue which one rapped the first verse, but for a song clearly meant to crossover on the charts it’s good enough:

“Baby I see you and I’m noticin you notice me
We at the same spot so this is the place to be
I’m feelin you baby so let’s see bout our chemistry
You got a look on yo’ face like baby come to me
You vibrant cause you smilin so nigga don’t want to leave
Cause I’m in a position that every bruh wanna be
If you bout it at the end of the night come with me
Aint tryin to get in your pants, we gon’ get sometin to eat
Look lil’ mama, your mind is what I’m after
So I gotta ask ya – whacha love, whacha hate, oooh I gotta have ya
Cuz you speakin the right words that I want to hear
Well get a lil closer, let me whisper in your ear
I got a love jones, for your body and your skin tone
Got what it takes to make grown men moan”

There’s no shortage of big name producers contributing to “All or N.O.thin.” Lil’ Jon does his typical (and enjoyable) King of Crunk style on “Hold it Down” but may surprise people with his smooth soul on “Pimpin,” featuring Jazzy Phe’ on the hook and Southern all-star Eightball on a dope cameo – but where’s MJG at? This one is probably front runner for the next single, but Ty Tyffe hits hard with a Just Blaze-esque style drum track and sped up vocal hook on “Don’t.” He also supplised the ominous symphonic beat on “Nine,” which sounds lifted straight from a Mobb Deep album. Even Houston’s Rap-A-Lot legend N.O. Joe drops in to close out the CD on the hard rock style “You Don’t Wanna.” Unfortunately it’s by this time that you’ve also realized these rappers are pretty run-of-the-mill, and the beats are what’s propping them up. At best their lyrics on this song are unremarkable, at worst they sound like a poor imitation of Master P:

“Say cuz’n that’s my shit
And if yo’ girl give me eye contact, nigga that’s my bitch
Say wodie don’t trip
Cause if you get too close to me you just might get flipped
So watch yo’ lips
Cause if you get a nigga pissed boi I swear to God you gettin whipped
I’m strapped at the hips
And if I finish too quick, ain’t no thang, I got extra clips”

Undoubtedly critiquing their lyrics will earn this writer a tall glass of haterade, but in the end half of it gets poured out on the ground. While the words may border on monotonous, they are not God-awfully stupid like some recent rap records (North and South, don’t get it twisted) in the last few months. And while none of the group’s members distinguish themselves (always a problem for new artists with a big posse) that also works to their favor, as none sound singularly awful or embarass themselves with terrible flow or diction. In fact one may notice that for a New Orleans group, the 54th Platoon sometimes sounds remarkably UN-Southern, and a little mo’ country in their flow might have been an improvement. Their album’s title doesn’t seem to leave room for splitting hairs, but “All or N.O.thin” really does fall in the middle of those two extremes. It won’t embarass FUBU Records too much, but it certainly won’t sell hotcakes like their clothing company’s Harlem Globetrotter collection.