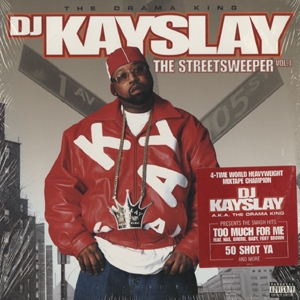 We’ve all gotten used to the love/hate relationship with DJ Kay Slay by now; that is “we” as in we who are fans of the rap music scene from New York City. On the one hand, Kay Slay’s cameo appearances on other rapper’s songs can be comedic gold, threatening to “slap the shit out you bitches” who can’t make good music; and Kay Slay can certainly be said to know a thing or two about what’s good given the popularity of his mix tapes in the streets. On the other hand, half-assed generic thug rappers have over the years abused that privilege and made his tapes an exercise in your patience – going from one monotonous no-namer’s alleged “freestyle” to another before finding that gold nugget he mined up. Of course, this is no different from the problem that plagues his competitors – Clue, Envy, and Whoo Kid are all guilty as charged, and often times far worse than Slay. Still, purchasing an “official” mix tape from any of these DJ’s who turned their bootleg fame into a legit retail release is usually a moment to dread – they can range from decent to bad to awful depending on just how many wannabeez got put in the mix over established rap veterans.

Kay Slay is trying hard to do something better though, and it starts off on a promising note with an “Intro” featuring Aaron Hall where he’s RAPPING. Yes, RAPPING – and he’s not all that bad at it. Take a look for yourself:

“You didn’t live my life, so how can you judge me?
You don’t know me, but you got a grudge with me
I don’t care what they say
I saw the jealousy comin way before I became Kay Slay
There’s always someone you know, who feels like you owe
Cause back in the days we used to play bro
I don’t respect no man who relies on ANOTHER man
when you got two legs and two hands
You better get on the grind (grind kid)
Better stop wastin time, stop worryin about mine
I owe that man above, from them times them bullets missed
Sheeeit, I knew what that was!”

His track is a very personal statement about his road to success, how his mom and his grandparents shaped him into a man of values, and how he even wishes his pops had been there to beat his ass when he was fucking up and going to jail. Too late now dad, Kay Slay don’t need your ass – he’s too busy politicking with the big names of rap. There’s no shortage of them on “StreetSweeper Vol. 1.” Just look at “I Never Liked Ya Ass” – it features Scarface, Raekwon the Chef and Fat Joe.WHAAAAT? Nobody would think of a collaboration like that other than Kay Slay, but it works perfectly. Raekwon sounds as good as he has in years and Joe is always the Don, but here ‘Face provides the chorus and is the lyrical showstopper:

“Nigga from the gutter, spit it and don’t stutter
I’m a gangster, raised around the dopefiends and hustlers
Where silence is golden, and the streets don’t talk
We don’t let shit slide, cause beef don’t walk
We attack hoes, fuck a nigga with whack flows
I’m the +Last of a Dying+ bitch, act like you don’t know!”

If things were already hot by this point, they only get hotter. The album’s title track features The LOX (they still sound better together than separately) and immediately following is 50 Cent with the song “50 Shot Ya.” It’s really no surprise to hear 50 on a mixtape any more, given he became the hottest name in rap BECAUSE of such tapes, but his fans will still be pleased by this rap, spit to the beat of LL Cool J’s “I Shot Ya”:

“Yo, in my hood we was taught not to say who shot ya
See the flash, you heard the shot, you feel the burnin, I got ya
Say a prayer for me if you care for me cause I’m on the edge
.. I’m fin’ to put a shell in a nigga head
I rock a lot of ice, I dare you to scheme on it
The fifth got a rubber grip, and a beam on it
Homie that took the hit on me couldn’t shoot
They say I’m skinny now, but I look big in the coupe”

Is there a prediliction for gun violence on Kay Slay tapes? One might start to think so when the track immediately following is “Get Shot the Fuck Up” by Mobb Deep and Noyd. You really wouldn’t know it was a Kay Slay track though, because it sounds like typical Infamous Mobb shit that could be lifted straight from their recent “Free Agents” release. Something you won’t hear anywhere else though is “Everybody Wanna Shine” with Black Rob, G. Dep and Craig Mack. Mack? HAHHHH, BWOY! He’s all up in it:

“Don’t know what you thought this was, we no little kiddies
We grown men now, established in big cities
And Frank Nittis? I got those crime gestapos
‘Sopranos’ to altos, from cops to Alpo
Sit back and eat a nacho and watch us nigga
How my story unfold like my couch do nigga!
Mack’s bigger than you thought you was and caught you cuz
With ammo like the army does!”

So where is the new solo album from the self-professed “Sugar Ray Leonard on tracks” already? PLEASE release it already P. Diddy, cause Mack is hella entertaining to listen to and the shit is long overdue. But the shit don’t stop here. In fact the next track “Too Much for Me” is probably the one most people heard that had them copping the CD – it’s a remake of some old school funk with Amerie singing the hook, while Nas, Baby and Foxy Brown spit to the beat like a MUCH IMPROVED year 2003 version of The Firm. Yes, even “The Birdman daddy” sounds good in this mix. So do The Diplomats on the track “Purple Haze.” So does Eminem on his hilarious freestyle tribute to The Drama King. What might be the most surprising at this point is “The Champions” though – a RAP SONG featuring vocals from nearly every all star of DJ mixtapes: Doo Wop, Tony Touch, DJ Clue, Brucie B, Kid Capri, S&S, Ron G, and even Funkmaster Flex. This is insane! The only way it could have been larger is to have Marley Marl, Red Alert, and Kool Herc up on the track, but then it might have taken up half of the album.

Coming at the halfway point, it marks the hottest part of the album slowing down to a slightly cooler side not quite as tight. “Seven Deadly Sins” is allegedly the best of female rappers, but with a selection like Amil, Vita, Duchess and Lady May, it’s not even close to being tight. Where are the legendary female rappers like Queen Latifah, MC Lyte and Roxanne Shante, or today’s true hot spittable chicks like Bahamadia, Jean Grae and Lil’ Kim? Of course this is acceptable compared to the straight slide into mediocrity of “New Jack City.” If you remember that it was previously mentioned that every mix tape has a bunch of whack no-names trying to shine, this one has them all on one song: Posta Boy, Cassidy, J Hood and a bunch of nobodies who couldn’t put together two bars one could give one fuck about. It starts loooking up though with “Westside Driveby” though, with the surprising appearance of E-A-Ski, MC Ren and Kam:

“I gutter ball like I’m bowlin, collectin my ends
Tryin to throw strikes at all these white redneck pins
In the Beamer or the Benz, wagon or the truck
‘Til my people delivered, man I don’t give a fuck
Stay pushin the line with mine, treat peeps I’m with good
Anti-Hollywood and I keeps my shit hood”

The rest of the mix is up and down. “I’ma Smack This Muthafucka” should have been superb given Noreaga’s guest appearance, but the beat is underwhelming and features far too little of N.O.R.E.’s trademark thug style. “Angels Voice” with the Flipmode Squad is good, but other than Rah Digga they all have been and still remain half as interesting as Busta Rhymes. “I Got U” with Styles and Bristal features one good MC and one generic nobody, I think you can figure out which is which. The “Take a Look at My Life (Remix)” featuring Fat Joe, Remy Martin and A Bless is okay, but could have been done without either of the latter two and still been fresh. “Coast to Coast Gangstas” is a little TOO ambitious, because it features everyone from Sauce Money to WC to Bun B to Killer Mike all on one song. It’s a tight beat which you may recognize from Dr. Dre’s classic “A Nigga Witta Gun,” and probably should have been left alone to it’s place in history. “Nino Brown” featuring Wyclef Jean is alright, but will leave his fans hungry for his next solo album more than anything, and “Put That Thing Down” by Eightball & MJG featuring Jagged Edge is a great song but a very curious way to end what’s ostensibly a New York mixtape. In short, while Kay Slay does a lot of things right here and keeps the album from being bogged down with too many lackluster rappers, it at times seems too overly ambitious and actually would have been more fresh if focused just on the hard N.Y. sound he helped make famous. Better than 80% of mixtapes sold on the streets and 50% of the ones sold at retail though, it’s still good enough to proclaim Slay the “StreetSweeper” and set the stage for Volume 2.