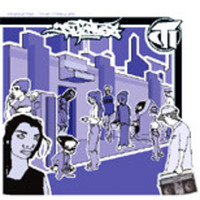 “You may not know me… I, I don’t even know myself… but ehm, I’m learning, though,” Ayentee introduces himself on his new album “The Manual”. Judging from this well-conceived longplayer, however, Anthony Blackman has a clear understanding of who he is and what he wants to do with himself. Alas, everyone who sets out to find himself risks to take detours and dead-ends. “The Manual”‘s opening track, “Everybodys Business”, is a humorous excursion on that very fact. Looking back on his childhood and adolescence, Ayentee lists every sport he ever wanted to master, every occupation he ever wanted to hold, going from this to that because there’s always someone more talented. As he rhymes towards the concluding line, you expect him to say that he finally settled with becoming a +rapper+, but if you go by the punchline, Ayentee will be a +pastor+ instead.

Which he really won’t, at least not for now. For that, “The Manual” deals with too much hip-hop issues, at times almost turning into an underground manual (‘underground’ being his choice of words). In “Freest Form of Media”, Ayentee starts at his roots, from when he first heard rap music (“I was introduced at an early age / moms swore it was a phase / dad thought it was cool / he was listenin’ to it too / so I grew up on Ice-T, LL Cool J / vs. Kool Moe Dee, Sparky D vs. Roxanne ShantÃ©”) to when he found out there was more to it than just music (“It wasn’t until high school that I realized it was a tool as well as music / but I couldn’t figure out how to use it / everyone was hollerin’ ‘underground’, this was in ’93 / and I was still tryin’ to figure out how this all applied to me”). Inevitably came the time when this kid from Berkeley, California wanted to rap himself and had to realize that not everybody agreed with his decision: “People started questionin’ the motive of these underground rappers that’s lackin’ melanin.”

If you’ve followed hip-hop over the past ten years, you will have noticed “these underground rappers that’s lackin’ melanin.” By now they’re pretty much established, east, west, and everywhere in between. They’ve become part of a scene that’s not only a counterpart to mainstream hip-hop but also to the independent scene that developped out of the gangsta rap heydays of the early nineties. Berkeley’s close-by cities Oakland and San Francisco host particularly healthy branches of this scene, but they’re even heavier with acts that reflect the gangsta lifestyle. Moreso than a question of color of skin, this is about where someone is coming from. Best believe that if you’re a white kid born in Berkeley to a dad that enjoyed listening to hip-hop and your bio explicitly states that you were “exposed to left wing ideals and socialistic view points early in life”, that such a background will reflect in your music.

But only a generous display of musicianship will make people listen to your music, and that goes for everybody, black, white, Latino, Asian, street-raised or college-educated. Ayentee’s got this one on lock, with beats that are fine-tuned to the topics and a delivery that ranges from tongue-in-cheek to commanding. His voice may not be the strongest, or the most pleasantly melodious, but thanks to a strong flowing ability, Ayentee never falls out of character when rhyming. Put up against other “underground rappers that’s lackin’ melanin,” Ayentee particularly gets props for not sounding all bitter and cynical. Instead, despite taking issues with underground rap and the capitalist society he lives in, Ayentee manages to keep a positive vibe throughout. The most telling example may be “Fan of the Average Fan”, a dedication to the few real hip-hop fans left delivered over a thumping rhythm-and-blues arrangement:

“This song’s for those who don’t know what a 4-track looks like
but can name every song on your album and sing along
Not the tag-alongs or the users or the girls that abuse ya
or the fruitcake choir boys that follow you around like a loser
Not the Wesley Snipes-type fan or the Stan-type fan
I’m talkin’ ’bout those fools who dream about bein’ your hypeman
he doesn’t wanna make music with you or even hang out
he just digs your shit, now that’s what bein’ a fan is all about”

Still, for the major part of “The Manual”, Ayentee makes a case for hip-hop dealing with serious topics. The Slick Rick-referencing “The Story” is a bleek look at our planet where “God’s experiment failed,” and man has submitted himself to a system that “operates as if humans were perfect / and treats 40 hour work weeks as if it were worth it / and does little for the people but lot for the business.” While the album is laced with stabs at the capitalist system, you’re not getting hit over the head with political propaganda. Ayentee is more interested in what it does to the individual, especially to himself. “Average Alienation” is a mixture of anger and blues set to somberly wailing soundwaves. Borrowing from Bushwick Bill’s “Ever So Clear” to express his mindstate (“most of my life I never had shit… I felt like a outcast, treated like a misfit”), he delves deep into what psychiatrists might call manic depressive behavior, describing a person that’s always up to something but never gets anything done:

“Now my day starts out with like a copy and paste of yesterday
always waitin’ for things to go my way
I ramble on and on in my head about bein’ the all and said
criteria of a man that’s about a half a scale up from dead
23 goin’ on 80, goin’ on crazy, goin’ for the lazy
world record playin’ records just to play ’em
[…]
or maybe I’ll play on the net, surfin’ like a cybernetic vet
and ain’t even solved a problem yet
Or I usually walk to the end of the block
and let my mind recite a old rap while my mouth spits a silent beatbox
and talk to myself at the same time in rhyme form while I jock
my skills like, “I’m your biggest fan, Ant
sign this when you have a chance”
And after I’m done signin’ my chest
I can give me overactive imagination a rest
and concentrate on the rest, which seems to be a daily struggle
between the meantime-shit I have to do to stay out of trouble
I’m always into somethin’, as long as somethin’
consists of unproductive behavior and unpredictable frontin’
my whole life is a mask, I don’t take it off during sleep
I dream with a shield and never let my feelings get deep”

By the time Ayentee reaches “Stuck”, his indecisiveness has turned into pure frustration, resulting in a powerful rant about not being able to move forward. “The Manual” continues along these lines, with Ayentee demanding us to “stop frontin’ like everything is peachy / cause if you’re a worker your rights are gettin’ taken away very discreetly,” mixed with his own fears to “live a life baggin’ groceries again,” because to him, “a 9 to 5 is a pointless way to stay alive.” All the better then, that he thinks about his own profession, for example on “What’s Your Mission”.

At this point, “The Manual” would lack a third dimension – if it wasn’t for the impressive “Emotional Vampire”. Exhibiting clever songwriting, Ayentee reveals a vicious cycle of people getting deceived in relationships and friendships, turning cruel and cold themselves, entering new relationships and friendships and leaving more victims behind. With ominous subcurrents of strings providing an apt musical background, “Emotional Vampire”, like all tracks produced by the artist himself, may very well be Ayentee’s magnum opus.

Advertising underground hip-hop as the “Freest Form of Media”, Ayentee makes ample use of that media on his second album. His motive is sometimes clearer than his message, but that’s what you get when a rapper aspires to be a credible artist. Arguably, the album’s content and the way it is presented require that you pay attention, a task made easier by the lyrics appearing in printed form in the CD booklet. If you decide to check out Ayentee’s “Manual”, you’ll come across a rapper who is succsessfully trying to find himself through expressing himself. The good music he comes up with in the process is more than a by-product, it’s the very essence of Ayentee’s existence as an artist.