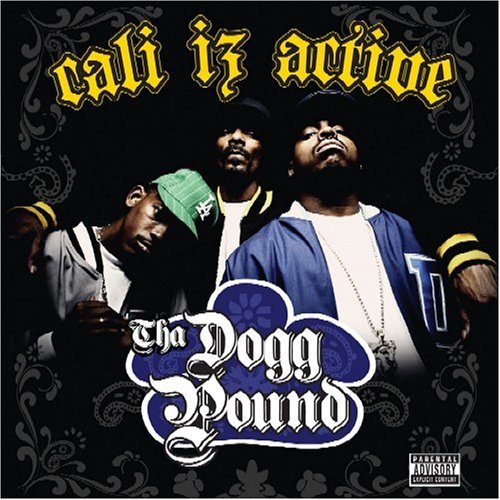 A full length collaborative effort between Snoop, Daz, and Kurupt is something that a lot of hip-hop fans have been waiting for. Even with Daz and Kurupt intermittingly releasing Dogg Pound albums the last few years, fans who remember the glory days of Death Row Records know that a true Dogg Pound album isn’t complete without at least one appearance from Nate Dogg and Snoop. This time around Snoop does more than just dropping one or two verses, playing the role of a full time Dogg Pound member. Nate Dogg comes through on two tracks, both featuring RBX. Even Lady of Rage and Ice Cube find their way onto “Cali Iz Active,” making this a true West Coast album. With their older and more famous cousin at the helm, Daz and Kurupt deliver their best effort since their debut album. Aside from providing his usual energy and charm, Snoop also uses his influence to bring in top notch production and a few interesting collaborations.

The production is handled mostly by long time West Coast staples Battlecat and SoopaFly. Both deliver stellar performances, showing that though they haven’t been in the mainstream for a while they can still drop that vintage West Coast sound. On the lead single, “Cali Iz Active,” Battlecat laces the track with a fat bass line that plays the lead, harmonic synths, and signature West Coast bells to produce a summertime anthem. Battlecat achieves similar results on “It’s All Hood,” where he blends funky pianos, deep bass, and well places vocal samples to come up with another party track. SoopaFly does his part to show he hasn’t fallen off since his Death Row days, impressing with tracks like “Keepin’ It Gangsta” and “Thrown Up Da C.” Non-West Coast producers that contributed to the album include Swizz Beats, David Banner, Mr. Bangladesh, and Jazze Pha. None of them are on top of their game. Swizz Beats does his best impression of himself on ” Sittin on 23Z.” How is that so? Well the track was originally a mixtape banger done over Smitty’s “Diamonds On My Neck” which was produced by Swizz. On the album version Swizz doesn’t allow the use of the original instrumental, instead coming through with a beat that sounds just like “Diamonds On My Neck.” While this route was probably taken for legal reasons, the results end up sounding bootleg. David Banner isn’t in top form on “Faknass Hoes” but delivers a decent beat that truly captures the “Gangsta Crunk” sound Daz tried to deliver a few months back. Though you might not recognize Mr. Bangladesh by name, you surely remember 8Ball and MJG’s “You Don’t Want Drama” off of the “Living Legends” album. This time around he drops a weak attempt at a club song that sounds like a mix between Mr. Collipark and Lil’ Jon. Jazze Pha also drops a weak club effort with “She Likes That,” straying from his usual funky and bass heavy production.

As a group, Tha Dogg Pound doesn’t really tread new ground when it comes to subject matter, but their saving grace is the fact that they were the originators of modern era West Coast music and they back up their gangsta lyrics with style and personality. The trio also has a chemistry rarely seen in the rap game which is exhibited on “Heavyweights:”

Daz: “Let’s get ready to rumble
I’m Spud Webb of the game and I’m smackin’ down Mutombo
Homie you don’t want no – problems with this heavyweight
Shut it down homeboy, yeah like every state
Act bold, talk shit, nigga get K’d away”

Snoop: “We so slick with this criminal shit
Winner with this, hard on a bitch
My fundamentals is swift
It’s confidential, our momentum make us ball like a fifth
Little hoe got stopped at the door with the fifth
But we ain’t trip, we still slip and slide and ride by high”

Kurupt: “No regard to a busta like you
On the streets, on the yard, smash a busta like you
I’ma – peel your paint and slap your bitch
I’ma – push the line and ride and chip
Osama… I’m fiction and fact
And I’ll beat the shit outta you and your batch”

Kurupt also injects most tracks with his unique style, treading the nerdy at times such as on “Keepin it Gangsta:”

“Who you aimin at nigga, you know I got you
Look me up to find Nosferatu
You’ll never get away motherfucker we after ya
I drain MC’s, poetical Dracula
I take away your mind body soul and spirit
Vampiric, I mutilate with words and lyrics
I injure with verbs off herbs and spirits
I’m everywhere like germs and spirits”

Other noteworthy performances include both RBX and Lady of Rage spitting with renewed energy and conjuring memories of the mid-1990s when both were at the top of the game. At least here, both show they haven’t lost a step and are on par with most of today’s acts.

Overall, “Cali Iz Active” is a dope West Coast album full of gangsta anthems that are funky enough to be enjoyed by all. The group stays true to its roots and brings nothing new to the game, but you can’t really expect a group to reinvent the game twice during their career. You might hear similar songs on other albums this year, but few can bring as much style and energy to the table as Tha Dogg Pound Gangstas. With The Coup and Paris getting political this year and Ice Cube bridging the gap between the streets and the mainstream, it’s only proper Tha Dogg Pound comes through with unadulterated Gangsta funk for fans who just want to cruise and party.