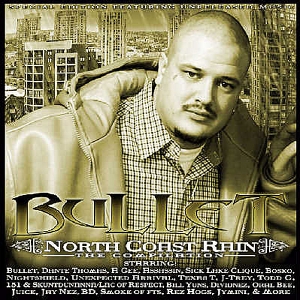 My favorite Sopranos episode is from the first season, number 10 to be exact; entitled “A Hit is a Hit.” Christopher Moltisanti and his girlfriend Adriana meet Massive Genius, a rap star with a financial grudge against the Soprano family advisor, Hesh. Somewhere in the show, Chris describes hip hop circa 1999 as “Fuckin’ drum machines, some ignorant poetry and any fuckin’ 4th grade dropout” is able to release music. These unfortunately are also my sentiments towards this album. The press release describes “Bullet Presents North Coast Rain” as a ‘regional compilation that features the biggest Hip-Hop and R&B acts from the Pacific Northwest,’ and claims that this album will in no time be ‘deemed a classic record, as it is easily the best Northwest compilation ever assembled.’ As Christopher himself might say, “Big fuckin’ deal!” Classic? I think not.

I’ll tell you what annoyed me about this crap and spare you the details of any redeeming qualities that this compilation may have, because there simply are no redeeming qualities. Bullet, a quote-unquote businessman, published poet and songwriter also happens to be a white rap artist. He has helped make his record label one of the movers and shakers in the Northwest Continental US as far as independent record labels are concerned. His press release further declares that in early 1997, just before that ‘other white boy’ blew up, he began to pave the way for up and coming “White Hip-Hop artists in his region.” To me that statement just reeks of suspicion. It’s as if they are anticipating people saying, “y’all just put out an album coz white rappers are hot right now.” Eastside Records is already on the defensive, and I haven’t even said anything or let alone put the LP in the disc drive.

Which brings us to sunny point number two; every MC on this LP, females included, has an irritating….Wait. Scratch that. Every MC on this LP, females included, has a disconcertingly bothersome accent that could have just been bought from the Heavy Cali Accent store, on sale! Take the worst sounding Cali-type accent, and magnify by several factors, and you get the idea. A little variety would be nice. And who says that this is what Pacific Northwest MCs sound like. I would think that they’d want to carve out a little niche for themselves, and not to see who can do the best Xerox impersonation. Whew, gotta catch my breath. OK. That stated, the production is, in a word or two, sub-par and rather deplorable. Most of the beats sound homogeneous to each other, with little or no deviation in tempo or instrumentation. It’s almost as if the producers majored in WackAssBounceBeats 101, DrumProgrammingForDummies 102, and failed those courses dismally. The album has 20 tracks, and, get this….18 different producers creating beats. Had they done something worthy of note, I would refer to them by name, but they do not even deserve to be referred to by their monikers.

In between the second-rate bargain basement R&B tracks, the lyrical content of the hip-hop tracks on this compilation is rather varied, and ranges from lost friendships, life’s trials and tribulations all the way to plain ol’ battle verses. Sadly, none of these lyrics registered in my mental rolodex. Why? See above comment on toddler poetry. All in all, I wouldn’t buy this album even if it came with a coupon for a free hand-job. In the Sopranos season one classic, “A Hit is a Hit,” Hesh walks in on Chris listening to a selection from a band called Visiting Day. Hesh offers this nugget of wisdom: “There’s one constant in the music business… A hit is a hit. And this, my friend, is not a hit.” I couldn’t have said it better myself.