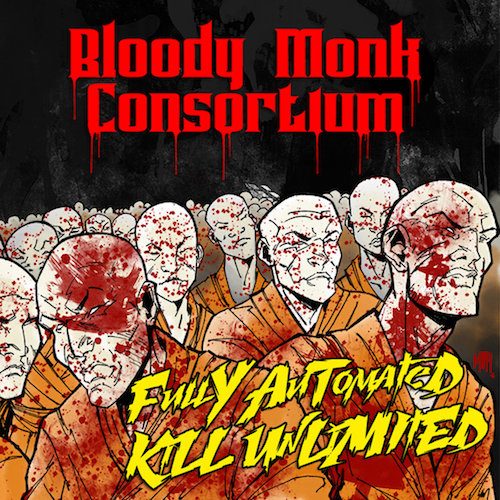 One way or another it always falls to me to review the latest project from the Bloody Monk Consortium. At their very best they are average to slightly above, but I can’t honestly tell you that they’re someone I’m checking for or eagerly anticipating to hear from each time they drop a new project. I generally listen to a B.M.C. album, write up my thoughts about it for you the readers, then promptly forget it exists and move on to more bumpworthy material. Even at their best they fail to strike a chord with me and capture my attention to the point I feel compelled to listen to the album more than once. They’re the rap act whose song you wouldn’t hit fast forward to skip over on a mixtape, but you wouldn’t go Amazon to buy it digitally or run to the store to cop their CD. Actually real talk I’ve never seen a Bloody Monk Consortium album in stores anywhere. I’ve got the physical ones they have sent me over the years so I do know they press them up, but I don’t think they have the distribution connections to get retail shelf space at Best Buy or Target. If you still have an independent record store in your town though they might have it — but your best bet would be to cop it online and have it mailed to you.

As I wrote the opening paragraph it suddenly dawned on me that I know why I always review the Bloody Monk Consortium — they’re TRYING. They don’t have the biggest name in the game, the best distribution for their albums, the reputation that puts them among rap’s elite, but they just never stop hustling or trying. Hustle respects hustle because an independent website like ours is in the exact same situation – we’re just out there trying every day and hoping that we earn a little bit of your time and possible repeat business down the line. As I listen to “Morty’s Death Wish” off “Fully Automated Kill Unlimited” I can say they’ve got at least one song that achieved that goal, because they looped the ominous “genocide run” music from the Hotlands in the video game Undertale. There’s probably 1% of their audience that would have picked up on that jack, but I’m that one, and if the album was public on Bandcamp I’d share the clip of it with you. Right now all I can give you is the “album sampler.”

One song you can catch in the sampler is “Nod Skwad” featuring Tame One from The Artifacts, with his distinctive acidic flow sticking out clearly from the medley as does his “vibing like Brick City/’til we bounce like big titties” bars. Coincidentally he’s the biggest name cameo on the whole project, and fits well enough into the harrowing melody that you’d want this song or “Morty’s Death Wish” on the aforementioned mixtape. (Come to think of it I wonder if that’s a reference to “Rick & Morty” – a f–king funny if often brutal show.) Not every song can maintain those standards. Take “13th Grave” for example, which you can hear right at the end of the sampler clip. It’s much easier to hear the raps when the instrumental break downs occur, and it’s not that the song is mixed TERRIBLY, but in my opinion the rap should be audible at all times — not just some of the time. That’s not the biggest sin though — the beats and rhymes are just boring. It’s going for some horrorcore type vibe with lines like “Meat grinders are where you wind up” but it’s neither disturbing nor memorable. It’s delivered in a ho-hum matter of fact fashion that doesn’t entice you to want more.

That’s the biggest shame of Bloody Monk Consortium to me. I respect their hustle, I want to see them succeed, but every step forward on an album is matched by a step back. Sometimes it all clicks on a song like “World of Darkness” that’s appropriately heavy and gothic and their Gravediggaz inspired vibe is on point. Then you listen to “Legion of Boom” and while it does thump, the bars seem to be trying too hard, with every line being screamed into the microphone in a disjoined fashion over a loop that repeats infinitely with almost no variation. If every song were as good as “Ringo Deathstarr” or “Bloodshed 2.0” I could give this an unqualified thumbs up. If every song were as bad as “The Black Monk of Pontefract” or “Boogie Monksters” I’d tell you to avoid B.M.C. completely. At some point if they ever put together a “Best of Bloody Monks” album and managed to choose only their dopest material, it could be a 100% win, but at the end of the day on most releases their highs get dragged down by their lows to an average that makes them a casual listen and not a must own.