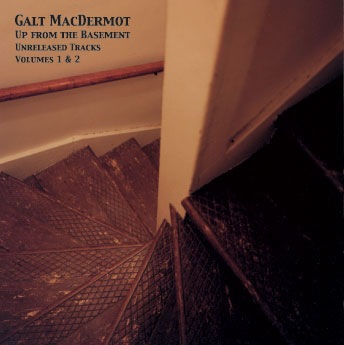 Galt, Up from the Basement

Galt MacDermot :: Up from the Basement – Unreleased Tracks Volumes 1 & 2

During the prelude to Outkast’s seminal banger “Skew it on the Bar-B,” Chef Raekwon tells the listening audience that they “gon’ play some funky shit fo’ y’all!” This is what Galt MacDermot has been doing since the middle of the 20th Century. Any attempt to characterize MacDermot’s influence on modern music is and will be deemed feeble and futile by all and sundry. This is something I equate with trying to school another person on the raw and unpolished talent possessed by Mike Jordan in the late â€˜80s. You can’t quite put it into words because they’ve already heard of the urban legend. Besides, how can you even begin to describe his defiance of gravity?

Now, what would you do if someone unearthed footage of MJ hittin’ jumpers as a youngster, practicing free throws in the gym or working on his game in his backyard? Undoubtedly, you’d want to peep this â€˜never before seen’ footage. Kilmarnock Records/MacDermot Music last year released “a series of archived alternate takes, unreleased soundtrack songs and even dusty acetates” from the”original funkateer.” These “gritty, piano-driven instrumentals” also do include some “reworkings of his classics” such as the lamentful “Ripped Open by Metal Explosions.” For those not in the know, MacDermot’s music is a bastion for crate diggers, and this funk assortment should satisfy even the hardest head.

A long time “jazz freak,” MacDermot moved to South Africa in the 50s and took in experiences that would influence his musical development greatly. Upon return to his native Canada, he composed the music for a play called “My Fur Lady” and broke into the music industry. The rest, as they say, is history. “Up from the Basement” contains over 70 minutes of groovy, funk anthems that titillate the ears with syrupy sounds. “Ba Ba Black Sheep” and “Come Away Death” linger in the mind post-listening due to the playfulness of the guitar and piano. MacDermot’s playing is brilliant and dexterous, and should be lauded for its execution. After you give this a listen, I’m sure you’ll agree that MacDermot is and should be revered for his crazy skills, and not just for being “the composer for the 60’s Broadway musical HAIR.”