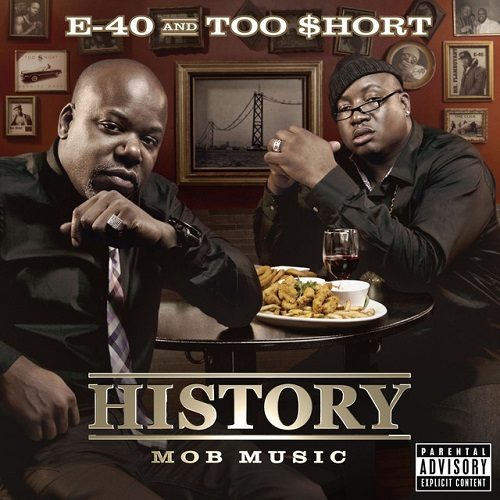 True, he may be overdoing it these days, having just announced volumes 4, 5 and 6 of “The Block Brochure,” but the truth is also that E-40 is one of the very few rappers who have been in the game for 20+ years whose new output can compete with contemporary sounds in terms of pure freshness. On last year’s double decker “History” Earl Stevens invited fellow rap veteran Todd Shaw to dip his pimp cup into the fountain of youth he hides somewhere on his estate.

“Function Music” promised to cover the more socializing aspects of Bay Area rap music while the companion piece “Mob Music” seemed more dedicated to trunk rattling than booty shaking. The lines aren’t drawn all that clearly, even so the ratio of spacey, repetive club tracks is significantly lower on “Mob Music” (just “Fire Fighter,” really). Instead the duo rides minimally orchestrated but sonically booming tracks that many will recognize as vintage mob music. Longtime E-40 collaborators Sam Bostic, Studio Ton and Rick Rock all provide production, but mob runs also in the Stevens family as Earl Jr., p/k/a Droop-E, once again shows himself to be a receptive student of his father’s musical legacy.

His opener “We Are the Pioneers” is an abrasive, pulsating something whose intentions you can’t quite gauge other than that it’s definitely up to no good. The menacing undertone has long been a staple of E-40’s music, but it has always been tempered by verbal wit and the perspective of looking from a comfortable present back at a cutthroat past. Case in point – on “We Are the Pioneers” 40 admits he couldn’t have imagined “signin’ autographs for cops” a quarter of a century ago.

He still regularly strikes the gangster pose, like on “Whip Out,” but in the end he merely takes a more personalized approach to detailing the mechanics of the street, whereas $hort assumes the role of the observer. This somewhat in contrast to “Function Music,” where this critic classified Too $hort’s writing as egocentric and E-40’s as observant. As long as his libido isn’t involved, however, $hort is an entirely selfless rapper, see his PSA’s about drug dealing and drunk driving on “Function Music,” or his empathic verse for “Ballin’ Is Fun”:

“Your life is hard, times are tough
Lookin’ for money and can’t find enough
You tried rappin’, but nobody signed you up
Got some cocaine, tried to grind the stuff
Went to jail, now your time is up
Can’t get it all together cause your mind is fucked
You’re mad at the world cause you’re ridin’ the bus
Lookin’ out the window, wanna ride like us
I’ma tell you somethin’ that’s good for your health
Never give up on yourself
You never know when it’s yo turn to get rich
Brand new whip with a bad lil’ bitch
$100,000 on your first car
Shit can really happen when you work hard
I’ma do it till I’m dead and gone
Short Dog – I’m havin’ hella fun”

Conscious and cautionary bits are interspersed throughout “Mob Music,” not just in a song that acts as a tour through California’s backstreets like “Ride With Me,” but also on the seemingly self-explanatory “Money Motivated.”

Naturally, the two still spend plenty of time showing off, 40 also naturally being the bigger show-off. Both rappers play their expected parts. As on the other volume of “History,” 40 always goes first, $hort never participates in the hooks, and tracks titled “My Stapler” or “Poncherellos” can really only be found on E-40 albums. $hort is a respectful guest, but he’s equally respected by the host, who declares early on:

“Earl and Todd’ll never play out – or fall out
Loyalty
You’re listenin’ to West Coast royalty
It wasn’t an accident, we ain’t clumsy
We paved the way, taught you how to get independent money
Grew up on Magic Mike and Calvin T
from the Rich; shout out to $hort and Freddy B
On my list that’s the greatest rappers to emcee
You’se a bitch if you don’t recognize me”

If you’re feeling sarcastic, “History: Mob Music” does sound like an old, broken record. And it does cater to a constituency who may want it to sound exactly that way. Surely E-40 and Too $hort themselves don’t mind it sounding the way it does, spreading nostalgia not just when Battlecat laces “Do You Remember” with feelgood funk and $hort reminisces: “I’m waitin’ on the Mothership / on some Parliament/Funkadelic shit / When I was 10, it wasn’t Too $hort pimpin’ / I was at the Coliseum watchin’ George Clinton.” A considerable number of rap fans feel similarly about E-40 and Too $hort, and “History,” especially the “Mob Music” half, is just for them.