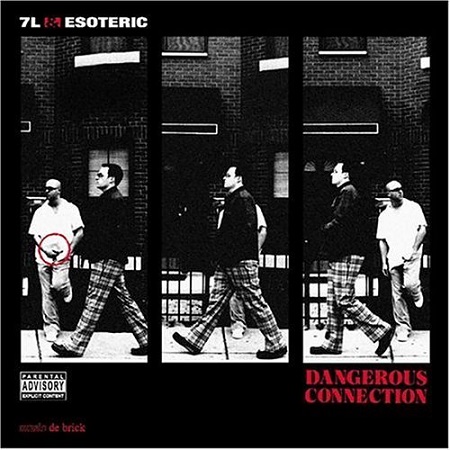 “Backpack? – Wack flow.” That’s Esoteric’s response to a little psychological quiz during the song “Word Association.” The irony though is that the very backpackers he decries may be the perfect audience for his new album.

Despite all the negative press that has been given to the term, a true backpacker is an open-minded hip-hop fan who might be as likely to have Redman’s “Malpractice” as Aceyalone’s “A Book of Human Language” tucked away next to the potato chips, CD player and can of soda or other beverage. The derisive meaning of the word has come to imply suburbanites that enjoy overly wordy rappers with whack beats, and push off said same rappers as being “elite” while derisively looking down their noses at everything from old school classics to the latest top 10.

When listening to “Dangerous Connection,” one suspects that Esoteric is himself the kind of open-minded backpacker who can be found rocking a variety of joints himself and drawing his inspiration from his contemporaries. Some less open-minded rap fans, the same who sneer at all “backpackers” regardless of what flavor of the form they might be, would probably turn up their noses at Esoteric. Despite the fact that 7L is one of the best producers and DJ’s in underground rap, and Esoteric slips from humerous punchline MC to thought-provoking verbalist with surprising ease, they would say with disdain that “he’s alright but he’s not real.” Why? Well if ever a dope rapper was to sound like the “white man from town,” it would be Es.

In 2002, those distinctions really shouldn’t matter. Esoteric proudly reps his home turf of Boston, Mass and sounds it too. If you can’t get over that fact, “Dangerous Connection” is not the album for you. Anybody who’s been down with Esoteric since his “Speaking Real Words” duet with Inspectah Deck though knows that no matter how white he sounds, Esoteric takes his craft just as seriously as Eminem. Actually, it’s possible he takes it MORE seriously; since Esoteric isn’t purposefully shocking to reach a larger audience. In fact, with guest appearances by the likes of Apathy, Count Bass D, J-Live and Vinnie Paz, Esoteric is clearly aiming for a listening base that might be called “backpackers” themselves; while in actuality they could simply be said to be heads who appreciate great MC’s and great beats no matter their background. Esoteric seems painfully aware of the irony of his independent label status though, as the song “Rest in Peace” proves:

“Now as I look down, it’s kinda tough swallowin
the fact that I’m a dead rapper with a cult followin
Legions of fans got their hands on my old jams
And new fans, they were sayin “Oh damn!”
at every punchline, and now the rumors break and hit
Cause everybody knew that I was workin on some new shit
Cats askin, “Who’s on it? Who produced it?”
Straight up, just ask deceased, let the man {“rest in peace”}
[…]
Although I’m dead mom, my soul remains undaunted
Now you can actually afford the things you wish you flaunted
And even though every studio will be haunted
I finally got the major label budget that I wanted”

7L & Esoteric prove themselves time and again over a wide range of impressive tracks. “Watch Me” has a piano loop that even DJ Premier would get hot for, and the Ghostface Killah sample in the hook is wickedly appropriate for Esoteric’s tough braggadocio. “Terrorist’s Cell” is an eerie track about the events of September 11th, 2001; and Stoupe’s beat is sure to send a chill down your spine. The aforementioned “Word Association” is a raucous boom bap beat that bashes you over the head as Esoteric becomes a candidate for the funny farm. Speaking of mental MC’s, both the sublime Rakim and the loopy Kool Keith can be found scratched into “What I Mean”; Eso’s duet with Beyonder.

Since this album is only 14 tracks and 46 minutes long, you’re left hungering for more by the time the CD is finished. At least, you are if you’re a “backpacker.” Wack flow? Hell no. Just because he sounds white to even the most color-blind of people doesn’t mean his breath control, timing, dexterity and vocal pitch aren’t precisely honed by both sheer ability and years of paying dues. Maybe there are a few backpackers in the hip-hop scene who can’t rap a lick, but if Esoteric was found in their cypher he would be the one humiliating them and at the same time encouraging them to improve their craft. The slamming beats on “Dangerous Connection” should win over any doubting Thomas, but those who still sleep on Esoteric thinking he’s the same kind of elitist arrogant backpacker that he despises will have to live with missing out on dope shit.