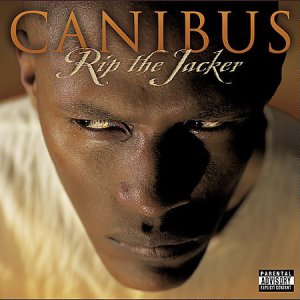 Canibus is a riddle within an enigma shrouded by mystery; a confusing conumdrum of conflicting creativity forces contained within his cranium. The dichotomy of his rap is a truly scattered diaspora – greatness left behind on one album, whackness living within another. On underrated albums like “2000 B.C.” and “Mic Club” the rapper proves himself to be more than a one-trick punchline pony with big words. On subpar albums like “Can-I-Bus” and “C True Hollywood Stories” he digs deeper into the abyss than a Pennsylvania coal miner. No one understands the reasons why, least of all Canibus himself. Still ‘Bis presses on, and each time we hope for the dope and not a plate of dog food.

On “Rip the Jacker,” Canibus may have finally found a producer who is capable of bringing out his best consistantly. If the long-winded name “Stoupe the Enemy of Mankind” doesn’t ring a bell, then you probably aren’t familiar with his work for the seminal underground group Jedi Mind Tricks. Nevertheless on a short list of indie rap greats, he ranks with Chops, Celph Titled, Alchemist and Madlib as among the best of the best in beats. Suffice it to say reading the words “All tracks produced by Stoupe” in the liner notes made this reviewer smile like a kid in a candy store. On “Rip the Jacker” Stoupe lives up to his reputation in spades. The martial arts sounds of “Spartibus” are perfect for ‘Bis and his kung-fu rap style; the Rakim samples of the hook are just icing on the cake. “Indisible” switches up into a mariachi meets Kanye West dance of death so brutal it’s beautiful. “Psych Evaluation” is appropriately dark and moody, putting the listener under the same microscope ‘Bis has often found his career in front of – and again the appropriate chorus snippets could give DJ Premier a run for the money. It’s also worth a break from discussing the beats at this point to see the power of his prose in this song:

“C-A-N dash, I dash, B-U-S
gets the last laugh before the critical mass
In half the speed of a ball flash, fire engulf that ass
into a molehill of charcoal ash
Only to be blown away by a cold draft
Whack MC’s got no chance, it’s so sad
They ask Canibus – will you ever run out of things to say?
How much breath can a man breathe in a day?
Needless to say, I think it’s kind of deep in a way
People be like – ‘Bis is too ill, keep him away!
It’s a good thing I got patience
I been waiting here longer than Dr. Levernson’s time equations”

But if you think ‘Bis is only here to bust super-science or challenge inferior MC’s, he lives up to the title and challenges himself:

“I used to be an undisciplined piece of fecal matter
An underdog rapper, but I closed that chapter
I deal with my adaptive difficulty faster
And question my projective technique as a rapper
I’ve lost interest in the battle glory and glamour
But I can’t control Rip the Jacker when he gets amped up”

This is the form Canibus fans have come to expect when all the stars align and a perfect moment of his time is captured on wax, and this album is packed with such crystalized slices of powerful rap ability. Therefore a gimmick like having a song called “Genabis” would seem silly coming from any other MC really do come across as a God of the microphone giving his word to the masses. That’s why on the former, which is also the lead single, Stoupe’s beat sounds appropriately awe-inspiring. It’s a mixture of bells, chanting choirs, and pounding drums appropriate enough to be the backdrop of a Final Fantasy boss battle. The only thing being attacked here though are your ears with lyrical skills:

“Yo, in the beginnin I discovered wordplay
I experimented with some syllables from the first to the third day
On the fourth I searched for the words to say
How to compress complex verbiage in the least amount of space
I was perfect at it and mastered the tactic
On the fifth day I decided I would combine it with mathematics
On the sixth day I became a fanatic, and I couldn’t kick the habit
I would just look in the mirror and practice
On the seventh cycle, I had to take the day off
I was exhausted, I guessed my work will never pay off
But if it happened it to him, it could happen to me
And if it happened to me, it was destined to be”

Although it’s instructive to single out individual songs and lyrics and break down their complex structure into the simple parts that make them dope, it’s ultimately redundant to examine “Rip the Jacker” song by song. In truth, it’s not as if any of the songs AREN’T dope. So effective is ‘Bis over Stoupe’s beats that it makes his past work better retroactively; making his claims on “Levitibus” that “even my worst album was sublime, if I don’t slow down I distort the timeline” sound entirely credible. As a rap fan you will enjoy every minute of this far too short forty-five minute album, from the “Intro” to the finale “Poet Laureate II” at the finale. Everybody will have individual favorites of course – some may enjoy the floating flute and lackadaisical pace of “No Return” while others may be more attuned to the heavy concrete sounds of “Cemantics.” Either way “Rip the Jacker” may be the first album of perfection Canibus has seen in his half decade career, and it showcases to an unparalleled degree why early on he was compared to greats like Rakim. If he continues to work with Stoupe and release albums like this, there’s no limits to where ‘Bis can take rap, or where hip-hop can ultimately take him.