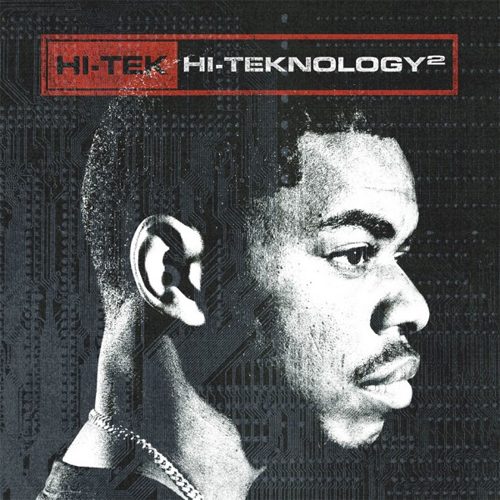 Technology accelerates at a rate none of us can anticipate. Bill Gates is reputed to have said back in the 1980’s that 640K would be enough memory for everybody. These days even a small MP3 can be anywhere from 4-10 times that size. I remember when 2400 baud was considered blazing fast for a dial-up connection, nowadays even 56K seems like a dinosaur and if you’re not rolling with high speed broadband internet connections you’re being left behind on the information superhighway. I suppose that’s why when Hi-Tek finally released a new sequel five years after the original “Hi-Teknology” album, he realized he might be perceived as being a little bit behind the curve. Therefore to be fair to the man we should note that even though online vendors and CD rippers don’t recognize it as such, the “2” in the title of “Hi-Teknology 2” is actually a RAISED 2, meaning it’s Hi-Teknology SQUARED or if you prefer Hi-Teknology to the second power. To him this isn’t just a sequel, it’s an upgrade.

That’s a fair argument to make considering Hi-Tek has moved on to Babygrande Records, and isn’t necessarily as limited to working strictly with underground artists or those in the grasp of his label. Babygrande put no limitations on Hi-Tek to link up with the best of the best, and Hi-Tek put no limitations on himself in what kind of beats they would lace him with. As a result “Hi-Teknology 2” is a broad swath of hip-hop cloth with a lot of different styles sewn into the fabric. Hi-Tek goes East to west on “Keep it Moving” by bringing Q-Tip and Kurupt together on the same track. Did you ever imagine that combination? Hi-Tek did and it works beautifully, with Dion singing on the hook while Tip vows they’ll “stand out like the sound of a clarinet.” He’s right – this subtle and jazzy track reimagines what hip-hop can be and brings harmony in more ways than one. You’d expect Hi-Tek to link up with Talib Kweli on “Can We Go Back,” but would you expect him to get down with The Game on “1-800-Homicide?”

Hi-Tek uses “Hi-Teknology 2” to redefine your expectations about who he is as a producer and what hip-hop itself really is. There’s plenty of ground to cover from North to South, East to West, and Tek digs into it all with this album. The guest roster is diverse, from Ghostface Killah to Bun B, from Jadakiss to Devin the Dude, and if you pick up the exclusive version with bonus tracks you’ll even find Snoop Dogg, Slim Thug and Bootsy Collins all up in the mix. While there at times that Hi-Tek’s ambitions outstrip what might actually make rational sense as a producer or a hip-hop fan, you can’t necessarily fault him for being willing to push the envelope on this disc in a way that most other producers can’t, won’t, or don’t. For that reason alone you should put “Hi-Teknology 2” on your shopping list, given both Tek’s consistency as a producer and his vision as a hip-hop artist, two things that make this album stand out where other compilation albums (and in the end that’s what this is) really don’t.