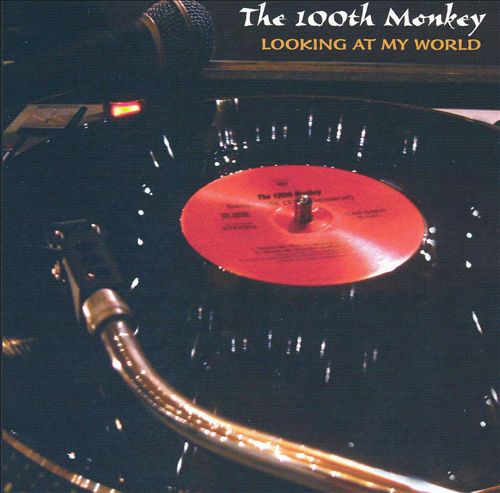 For a hip-hop act, the fact that they’re actually a band is without a doubt The 100th Monkey’s most prominent feature. However, at a time when the fusion of rock and rap is widely associated with acts like Linkin Park, Limp Bizkit and Kid Rock, the Seattle- and Tacoma-based outfit doesn’t quite fit the bill. Comprised of rapper Dave Devereaux, drummer Jay Dâ€™Lay, bassist Rob, keyboardist Brian Binning, singer Miss Loretta, DJ Cladd and assisted by guitarists Kimo and Mike Rivers, The 100th Monkey aims for a down-to-earth, unadulterated live sound, favoring funk over metal influences. Performing since 2000, the group follows up its 2002 self-titled debut EP with its first longplayer.

As the title “Looking at My World” suggests, the songwriter takes center stage in what The 100th Monkey is trying to get across. Other band members might share this particular world being described, but lyrically, this is as individual as any solo rapper’s album. With a voice that is hard but not hardened, Deveraux lays out his philosophy in a language that is his own, borrowing from rap’s funds but ultimately finding his own style. His approach is very direct, to the point where he will say: “Tacoma’s my home, take what I say literal.” He depicts his town as a not so happy home in “Ain’t Quite the Hills”, placing his turf somewhere between ghetto and fabulous:

“Honest, happens this way round my way,” he asserts, perhaps suspecting that most people don’t think of Tacoma, WA as a particularly harsh environment. And despite describing it as a “Lost City” in one song, Devereaux feels at home there: “I’m a leftist, moderately I’m sexist / and even if I had the dough I wouldn’t buy no Lexus / I’m happy with my ’89 backstreet, beatdown, Southside T-Town Caddy, muthafucka.” Even though the last word I just quoted is slightly edited like most of the profane words on this album, “Looking at My World” accumulates the same urban grit and grime we’re familiar with from many other rap records. But while he sees himself as just “a small-time hustler, tryin’ to make my ends meet / sell my LP on the street,” Devereaux realizes that “global drama devastate my habitat” (“Help Me”) and tries to “with my rhyme be noble / think global, act local / avoid another Chernobyl / go back in time / find Oppenheimer and Einstein / charge ’em with the crime of the mind.” This man-is-his-own-worst-enemy vibe spills over to political songs like the post-911/pre-war “Not Divine But Demonic” and “War”, or the title song, which features the chilling chorus

“I’m lookin’ at my world…
and I wonder sometimes, does it look back
get pissed off and crack
blowin’ up a mountain pass to just get us back
sparkin’ up a hurricane to watch ’em bodies stack?”

The band’s repertoire isn’t limited to pessimistic songs, though. “Bump” is a catchy opener that makes for a smooth entrance, “Wanna Get You High” offers a different, musical high, and “Damn it Feels Good” finally finds the rapper reconciled, happy to be able to live out his dreams:

“Damn, it feels good to do exactly what I wanna do
not restrained by a 9 to 5 like you other dudes
Every single waking moment spent thinkin’ ’bout my music
If you ask my wife, said she lost me to it”

“Looking at My World” is neither musically nor lyrically particularly advanced, but it feels like an honest project where the rapper gets to say what he wants to say and the musicians get to play what they want to play. Heck, DJ Cladd can throw in as many ’80s hip-hop samples as he likes, from Flavor Flav’s “kick that shit” to Original Concept’s “pump that bass,” from The Treacherous Three’s “The New Rap Language” to Mr. Funky Drummer Clyde Stubblefield. Produced by Seattle’s Jack Endino (who hosted legendary Mudhoney and Nirvana studio sessions), The 100th Monkey achieves a sound similar to a good live set. Their best collective effort may be “Can’t Let Go”, which starts out with Gang Starr’s “Take it Personal” beat, before the clear guitars enter an extended dialogue with Devereaux’ rugged rhymes.

If after this review you’re expecting something along the lines of Everlast’s Whitey Ford phase, erase that thought. Despite its contemplative name, “Looking at My World” is a rich, vibrant record, uptempo at heart. And call me old school, but more than any singer or rapper wailing about the woes of the world, Dave Devereaux reminds me of Seattle rap legend Sir Mix-A-Lot when he used to talk sense into fools. In that respect, The 100th Monkey has every right to claim: “The West got them gangstas, the South got the bounce / East got them poets, Northwest is now announced.”