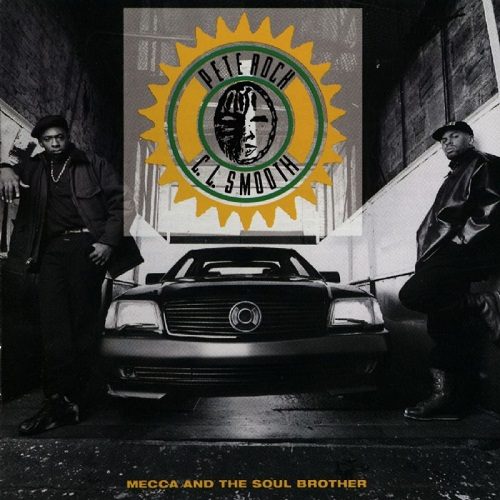 Mecca and the Soul Brother

When Pete Rock’s long, impressive career comes to an end, many hip-hop fans will look back and honor him with this neat accolade: He produced, what is arguably, the best track on the best album of all time-“The World Is Yours,” from Nas’ timeless wonder, “Illmatic.” This is no small feat when considering the impressive list of producers featured on “Illmatic”: DJ Premier, The Large Professor, L.E.S and Q-Tip. Of course, a masterpiece such as “The World Is Yours” wasn’t produced by accident; it’s the byproduct of a brilliant producer at his best. And put simply, that’s what “Mecca And The Soul Brother” is.

Prior to indelibly impressing fans with his production for Nas, Pete Rock released an entire album with long-time partner, C.L. Smooth. And while C.L. can’t touch Nas on the mic, he is a damn good MC in his own right, and together, Pete and C.L. forged one of the greatest partnerships in hip hop history. Pete’s uncanny ability to mesh soul, jazz and R&B onto an album is unparalleled, and C.L. doesn’t hamper the production in the least-there’s a reason why he’s referred to as C.L. “Smooth,” and he shows it time and again on this album. Pete even spits some verses on Mecca, and though he’s not the nicest to ever hold a mic, he’s not bad either.

The fact that there is a stand-out track on this album speaks volumes about both how good that particular track is and just how good this album is. “They Reminisce Over You (T.R.O.Y.)” is as memorable as “The World Is Yours”-both in production and lyrics. “T.R.O.Y.” is, among other things, a dedication to a deceased friend of both Pete and C.L., T-Roy. To call the beat soulful would be a complete understatement, and to call C.L.’s narrative rhymes anything but touching would be the same.

[C.L. Smooth]
“I reminisce for a spell, or shall I say think back
22 years ago to keep it on track
The birth of a child on the 8th of October
A toast, but my grand daddy came sober
Count all the fingers and the toes, now I suppose
You hope the little black boy grows
18 years younger than my momma
But I really got beatings ’cause the girl loved drama
In single parenthood, there I stood
By the time she was 21 had another one
This one’s a girl, let’s name her Pam
Same father as the first but you don’t give a damn
Irresponsible, plain not thinking
Poppa said “chill” but the brother kept winking…”

Pete Rock’s understated genius is subtle, but great on this track. The full horn riffs substitute for any real hook, C.L.’s lyrics replace most of the horns on the verses with a softly “Oooooh”-ed chorus of female vocals in the background. “Return of the Mecca” is one of C.L.’s better lyrical performances, and Pete allows him to shine over the verses, which predominantly feature a booming drum and understated bass beat. But it’s all tied together by a trademark Pete horn sample on the chorus. “Ghettos of the Mind” is one of the more explicit, socially-conscious on the album. C.L.’s intelligent raps go perfectly with Pete’s beat: “Finally the cops come dumb to the slum/Pull out a gun and arrest the wrong one/Wax all the Puerto Ricans and blacks/So they can never relax.”

Don’t make the mistake of thinking the “message tracks” like “Ghettos of the Mind” are at all preachy or token. It’s quite the opposite actually. On “Anger in the Nation” Pete even displays his ability to cut and scratch vocals on a hook, a la his contemporary, DJ Premier. All this while C.L. looks to inspire the black people of the country to unite and improve their living.

From personal tracks like “T.R.O.Y.” to the socially-conscious like “Anger in the Nation” and “Ghettos of the Mind,” Pete and C.L. seem to cover it all-even touch on the subject of love on “Lots of Lovin’.” On the latter, the duo shows their ability to work with the live vocals of a female on the chorus. “Straighten it Out” may feature as good of a beat as any on this album. On it, Pete shows his knack for combining his favorites music genres as a thick bass line rolls smoothly beneath some light guitar and an infectious horn loop.

On “Act Like You Know,” C.L. Smooth displays his affinity for dropping his smooth-flowing lines, laced with wit, intelligence and knowledge over Pete’s dope beat, with his usual jazz horns and even some be-bop crooning on the hook:

“Here comes the hurricane, C.L. same name
Cut by the grain when I land upon the plain
Jah knew the Hebrew, a Papa Duke need you
But none of the fam’ who saw had a clue
Escalate the prime rate, words coagulate
Generate the mind’s state, never can deflate
Nigga, you jigaboo, it doesn’t have to be you
Funny like a cartoon, Pepe Le Pew
Pimp are the lyrical, g-string the individual
But the metaphysical isn’t spriritual
Straight from the heart I frame the art
Tune up my class, real fast, very smart
Dictate the technique, wait a minute, I speak
Loved by my son and a kiss on the cheek
Stutter-step the concept, blueprint, or pro
Steady as we go so act like you know”

There’s not much to be said about this album that hasn’t been said at one point or another. It’s 16 banging tracks of straight hip hop at its best. No track clocks in at less than 3:57, and it’s all quality material. It’s not even worth making the effort to skip a track because “Mecca” is that enjoyable. After listening to this display of masterful production and solid lyricism, it’s easy to understand why Pete Rock carved his niche as one of the best producers in hip hop history. His sound is trademark, no doubt; the dope horn sample is to Pete Rock as the scratched-in vocals on a hook is to Primo.

Pete Rock & C.L. Smooth offered something special with this album. Conscious, mournful, playful, joyous and just straight-up head-nodding. “Mecca and the Soul Brother” is the kind of album you play straight through whether you’re listening to every idiosyncrasy of every track, or just kickin’ it with your homies and need some music for the background. Over a decade later, this music is still relevant. The sample-heavy, jazz, R&B, and soul flavor may sound a little dated to some, but I still think it’s a breath of fresh air amidst the mass of mediocrity in today’s music scene. There’s no gimmicks here either, it’s two guys who know what they’re doing, and doing it damn well. As they said, so fittingly, in ’92, “Can’t Front On Me.” You still can’t.