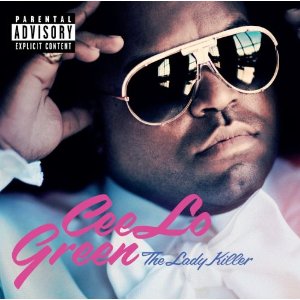 Technically speaking “The Lady Killer” is Cee-Lo Green’s first solo album since 2004’s “Cee-Lo Green… Is the Soul Machine.” Technically. In truth the king of hip-hop singing has stayed busy that entire time, releasing two collaborative albums with Danger Mouse under the Gnarls Barkley brand name. One could argue these were Cee-Lo albums in all but name considering Danger Mouse laid down the beats and not the vocals; it was the passionate delivery of Thomas DeCarlo Callaway b/k/a Cee-Lo that carried the show. Depending on how you slice it then, 2010’s “The Lady Killer” is either long overdue or a big return for the “Closet Freak.”

Recently reports have surfaced that Goodie Mob squashed any beefs that arose when Cee-Lo left the group back in 1999, and it seems they’ve even done a couple of shows together again as a foursome. Now considering their debut album is unquestionably a hip-hop classic most observers would consider this good news, but listening to “The Lady Killer” I really question if a reunion makes sense in 2010. Perhaps five years ago there was still a chance the group could have buried the hatchet and recaptured their original sound, but Cee-Lo has grown tremendously as a soloist in the last decade. Inside the GM structure he was the focus on most songs, having the most memorable verses and thought provoking performances, and like Busta Rhymes in L.O.N.S. he was clearly their breakout star. Have the Leaders of the New School reunited since Busta went platinum as a soloist? No – but we’ll come back to this point in a little bit.

Once Cee-Lo DID cut loose as a soloist his style grew yearly to the point he now eschews rapping almost entirely in favor of singing. Unlike Andre 3000 I’ve actually found this a welcome transformation. Andre tried to transform himself into hip-hop John Lennon/Bob Dylan type of artist without the pipes to go pop, while Cee-Lo bellows from deep within his body and unleashes heartfelt crooning that’s damn near gospel in its passion. The irony of course is that “Fuck You” might be the most sacrilegious song of the entire year – a throwback to the Motown sound of the 1960’s and 70’s that could never be played on any radio station of that era. Some girl must haveREALLY done Cee-Lo wrong in his life, because few vocalists have ever put so much passion into the phrase “WHY?!” The lyrics are by turns desperate and defiant, a wild roller coaster of emotions, but between the manic swings it’s clear that Cee-Lo can look back on turbulent times and say mannnnnn – fuck it!

“Now I know, that I had to borrow
Hah, beg and steal and lie and cheat, ah
Trying to keep ya, trying to please ya
‘Cause being in love with your ass ain’t cheap
Naw, I pity the FOOOOOL-HOOOO that falls in love with you, oh oh
(Oh shit, she’s a gold digger)
Well (Just thought you should know, nigga)
OOOO-OO-OOO-OOOOOH, I’ve got some news for you, huh-hah
OOH!!! I really hate yo’ ass right now”

That’s not the only thing Cee-Lo just thought you should know on “The Lady Killer” though. Few people have mastered the art of self-transformation to the degree Cee-Lo has, and the kicker is that it was leaving Goodie Mob that gave Cee-Lo the confidence he has now. He was just as talented in the 1990’s, but would never have imagined himself as a debonaire James Bond type figure, and certainly didn’t look the part either. It really doesn’t make a difference talent wise how you look (Susan Boyle anyone) but there’s a curious interplay of human psyche between internal and external satisfaction that can be seen in body language. As his success and critical acclaim as a soloist grew, you could almost literally see Cee-Lo’s posture change. It’s not like he can change his God-given height or body-type at this point, but he now carries his weight with confidence and dresses like he’s sexy as hell. Many women said that Biggie Smalls was no Tyrese but that it was confidence, charm and humor that gave him sex appeal – and Cee-Lo is “The Lady Killer” for the same reasons. Listening to “Bodies” you can tell he’s become full-fledged in his swagger:

“The wine is white, and the lights are dim
They warned you, don’t go home with him
These guilty feet’ll never dance again
(I know, but will I ever get the chance again?)
I’ve been held in contempt for an incident
It takes two to be intimate
So by no means was she innocent
(Well it wasn’t a crime, but admit the sin)
They said, that chivalry is dead
Then why is her body (body) in my bed?
At sunrise, the morning papers read
They found a body (body) in my bed”

Production can make or break the man just as much as image, and Cee-Lo is not slacking in background music on this album. Ben H. Allen turns “Bright Lights Bigger City” into the kind of epic manifesto you’d hear opening a James Bond movie. Fraser T. Smith and Jack Splash weave warbling horns into the disco tempo of the heartfelt ode “I Want You” perfectly. “Old Fashioned” finds Alan Nglish looking for that Smokey Robinson sound, and Cee-Lo soars high above it into the clouds, carried by the slow tempo and lush orchestration. The modern sound can still be found on the album though, as Cee-Lo teams with Lauren Bennett on “Love Gun,” on a track where he also teamed with Saleem Remi on production. It jumps, pops, blasts and bops along as Cee questions his female foe: “Are you ready for the showdown? Cause tonight it’s gonna do down.”

What’s REALLY going to go down though is the long-term chances of a Goodie Mob reunion being successful. Sure they can come together for one night to do a show, or perhaps reunite at an awards ceremony and then perform a couple of their hits, but it’s like expecting Busta Rhymes to fit comfortable back into L.O.N.S. after he’s become a MUCH bigger star on his own than any of the rest of his crew. Creative differences drove them apart in the first place, and in terms of both his confidence and his creativity “The Lady Killer” shows Cee-Lo Green is in a much different place now than he was ten or even five years ago. The unbridled passion he sings with on this album may make it more of a R&B release than a rap release, but that doesn’t make his heartfelt Southern-fried soul any the less enjoyable. What fans and critics have learned since “Closet Freak” first came out is that Cee-Lo wanted to be this all along, and seeing him fully evolved into “The Lady Killer” makes it clear Pandora’s box has been opened for good.