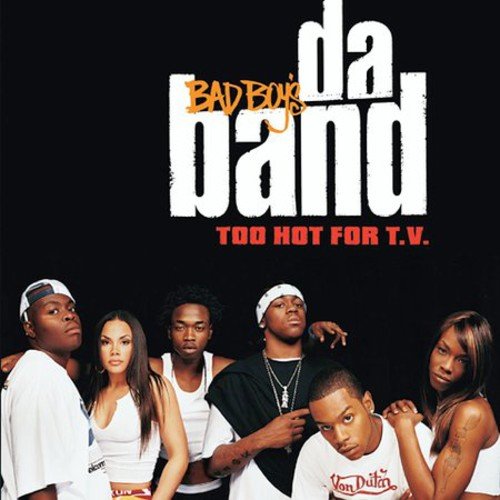 As concept groups go, Da Band was not one of the most brilliant ideas to come along. Da Band. P. Diddy put a rag-tag group of wannabe rappers together on MTV and tried to forge them into a cohesive unit, through a barrage of verbal abuse for not knowing the words to Biggie songs and another barrage of verbal abuse when they did but couldn’t rap them with enough intensity. So it’s Da Band, and P. Diddy is “Making Da Band.” Does that mean they are hip-hop’s equivalent of O-Town?

The music is basically forced to carry this crew from one end of the CD to the other, since they can’t hold the weight themselves. At times it almost passes for good hip-hop. The Natural and Tony Dofat supply a nice track for “My Life,” where Babs does her best impression of Lil’ Kim (and little wonder P. Diddy wanted her in the group). P. Diddy and Tony Dofat provide the kind of saccharin sweet in “Tonight” that you’d expect for pop crossover, and the singing in the opener might make you think it was a Faith Evans song until Babs once again steals the show with a rap so raunchy Kim could honestly sue her FOR stealing:

“Yeah baby, tonight’s the night
I’ma ride that thing like a motorbike
Grab my waist and hold it tight, I’m not frontin
You think I bought a box of Lifestyles for nuttin?
PLEEEEEASE, I got blunts, you supply the weed
I’m the best, so baby keep yo’ eyes on me
It’s about time I get mine, nigga I’m ready
And sex ain’t the bomb if the girl ain’t sweaty”

If they can tone it down a little bit for radio play, it might be a hit single from this group. It would have to usurp the silly “Bad Boy This, Bad Boy That” though. The same production team that made “Tonight” so hot makes this one so not. The bare bones beat and quick stabs of sound scream Neptunes envy, but have none of Chad Hugo or Pharrell’s power. The lyrics don’t exactly scream hip-hop greatness either, as Ness tries desperately to evoke images of better MC’s:

“Go somewhere, and be a maintnence man, a janitor
Dog don’t blame me, blame ya manager
Keep ya hands out my pockets nigga
Franchise like I play for the Rockets nigga
+Who Shot Ya+, +Biggie Smalls+, Tupac ya nigga (Who shot ya)
“Ready to Die”, “All Eyes” on the project nigga (Yeah)
You stocky, I put somethin’ in ya biceps niggaz
I can’t help it, I’m a violent nigga”

If that track stays top 40 it’s either a miracle or P. Diddy’s using his MTV connections to make sure the video stays in heavy rotation. What won’t be in rotation? Mediocre songs with mediocre titles. “I Like Your Style” and “Stick Up” scream Hip-Hop 101, and Da Band was rushed through their classes and given undeserving passing grades. When one hears the song “Why,” previously featured on the “Bad Boys II” soundtrack, the answer is fairly apparent – P. Diddy has no faith in better, more established Bad Boy rappers like Black Rob, G. Dep and Craig Mack. Diddy obviously feels he’s better off filling his roster with unproven and raw talents (some of whom may have POTENTIAL to be soloists, but certainly don’t belong in this debacle) than to go with his proven veterans who are more than capable of hitting home runs out the park. Let’s face it, he’s traded Roger Clemens for Rick Vaughn. Maybe they too can be molded into power players, but this isn’t a movie and nobody wants to sit through this mess for an hour to find out. These Bad Boys and Girls need to grow on their own, outside P’s bad influence and harsh spotlight.