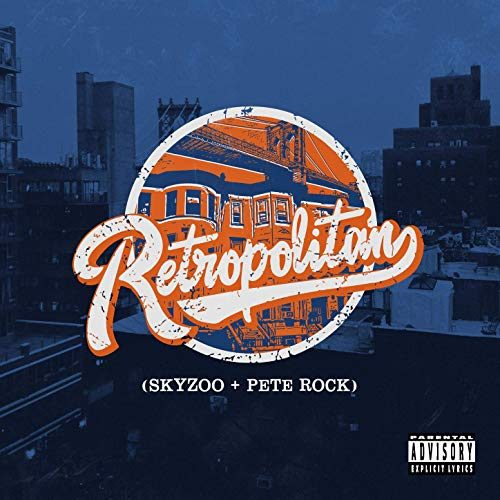 Skyzoo is no stranger to collaborative albums in which he’s working with only one producer. 9th Wonder, !llmind, and Apollo Brown have all respectively laced beats for the Brooklyn emcee on 2006’s “Cloud 9: The 3 Day High”, “Live from the Tape Deck” in 2011, and 2016’s “The Easy Truth“. While all three producers created soulful music canvasses for Sky to rap over, the one anomaly they all have in common is that they hail from different states than Sky. Though !llmind is nearby being from across the Hudson in New Jersey, none of them are from New York. Enter Pete Rock. With hip-hop from the Big Apple getting a spotlight thrown back on it this year, it only makes sense that Sky and the Chocolate Boy Wonder team up to make sure that spotlight doesn’t go anywhere else for the time being. With their Mello Music Group-released collaboration, “Retropolitan“, one can expect the sounds of concrete jungle. Even the color scheme of the album cover is a nod to the New York Knicks basketball team. Content-wise, it rings as a salute to the New York City of yesteryear. In fact, Sky states on the first official song, “Glorious”, that the album is “a love letter and a wake-up call to the city… all at the same time”. In listening, it’s a walk down the past, but not too far that they lose sight of the present.

“Truck Jewels”, is the first true collaboration on the album. Apart from Sky’s well-honed flow as well as the horn and flute samples comprising most of the beat, Pete does double-duty and kicks a verse which includes the well-aimed critic-directed dart “Me fallin’ off is like a Muslim at a Luau”. Pete Rock’s production on this album succeeds for the most part, but not so much when he samples familiar material. “Carry the Tradition”, for example, has some slamming snares and piano notes, but the “LOUDER!” vocal sample makes it too recognizable. “Homegrown”, with the Gil Scott-Heron sample, doesn’t fall into the same vein, and that makes it distinctive. I’ve heard this sample flipped over a decade ago and it had more of an urgency to it that resonated with its source back then. Pete Rock’s flip has more of a playfulness to it that goes with the braggadocio of the lyrics. “Ten Days” has the most modern sound to it with its synths and ambient sounds, and it matches the bright lights of the bigger NYC instead capturing the city’s usual grit. Among the best produced tracks is the album’s first single, “It’s All Good”. Pete adds piano notes, well-placed keyboard samples, old school drums to give life to Sky’s New York City curbside observations and aspirations:

The most ‘retro’ track on the whole album is certainly “Richie”, with its faint crooning female vocals, dusty groove drum snares, and atmospheric piano sample. Skyzoo’s flow over this beat adds to the head-nodding appeal to give it significant replay value. The album’s closer, “The Audacity of Dope”, also has a similar old school production vibe, namely that NYC boom-bap style with hard drums and layered vinyl samples. But lyrically, it sums up who and why Sky does hip-hop for and what makes him continue with it despite it having the pay and benefits of modern-day inner-city social work. On “Penny Jerseys”, Sky tells an amalgamation of his memories as a city youth, but the overlay of Penny Hardaway jerseys as such sports gear was the most prominent stand-out for him from that time.

The guest appearances on “Retropolitan” actually make up 25% of the tracklist. Styles P. lends his trademark “hardest out” raps on the NYC-rap torchbearer, the aforementioned “Carry the Tradition”. The track that benefits the most from Pete Rock’s jazz-sampling tendencies is “One Time”, featuring Raheem DeVaughn. It has all the sounds of a live jazz lounge with its sampled audience applause, smooth horns, and DeVaughn on the melodic hook. But the strongest collaboration on the album is also its second single, “Eastern Conference All-Stars”. When it debuted months ago, my first thought at just glancing at the title was “Give the High & Mighty their idea back!”, but that thought was quickly dispelled once I started listening to the track. Nearly 6 minutes long with basketball references all throughout, Skyzoo recruited Detroit rapper eLZhi and the three rappers comprising Buffalo’s Griselda Records roster (Benny the Butcher, Conway the Machine, and Westside Gunn) to be part of his line-up. Though this is Skyzoo’s team, his guest stars’ skills outperformed his own, particularly Benny’s vivid coke rhymes, Conway’s rated ‘R’ hyper-realism, and eLZhi’s polysyllabic rhymes schemes:

On “Retropolitan“, Sky continues to keep himself busy and Pete Rock proves his relevance. Given the title of this album and where it’s from, this album could have very easily been a ‘90s New York City period piece with hardcore rhymes over unreleased beats from Pete Rock that have been laying around for more than 20 years. But thankfully, it wasn’t that. Both the rapper and the producer created an album that’s old school enough to those who remember that era, and fresh enough for the younger crowd who hold that era in high esteem.