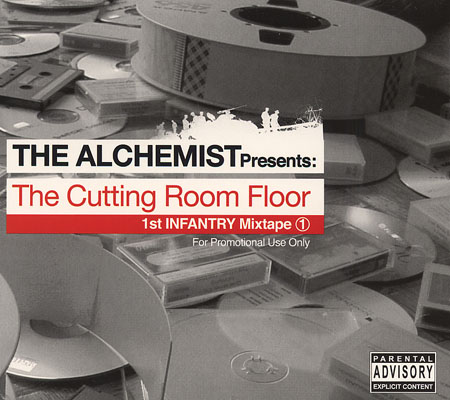 The Alchemist has earned the right to release a compilation comprised of previously-unreleased material and have hip-hop fans yearning to see what it’s like. His production for diverse artists such as Dilated Peoples, Nas and Mobb Deep, has made him a top-echelon producer.

That being said, there’s probably a reason(s) why these tracks haven’t been included on the featured artists’ albums in the past; industry politics may have played a part, or sometimes a track doesn’t mesh well with the others on an album, or the track just isn’t that good. Luckily for us, most of these tracks are. “Street Team (Remix),” featuring M.O.P. and Kool G. Rap, may be one of the best tracks. A thick bass line is accompanied nicely by an even-thicker horn section and playful flutes. All three rappers rip the track apart, matching the energetic beat.

“Walk With Me,” featuring Havoc’s raps, and “First To Drop A Beat The Boldest,” featuring both Havoc and G.O.D., are actually produced by Havoc himself, which begs the question: Why are these tracks on Alchemist’s compilation if he didn’t produce them? Nonetheless, both are typically-ominous Mobb Deep tracks and Havoc sounds pretty good behind the boards. “Still In Effect,” appropriately featuring the raps of Freeway, is a Roc-A-Fella-esque track with the sped-up vocal sample and a cool, punchy beat. This one is an obvious example of a track that fell victim to the cutting-room floor as it clocks in at 2:25 and only about one minute of that is allocated to a skit.

“In Jail” features a sweet, choppy piano loop but is nearly ruined by the lackluster lyrics and flow of Nashawn, who sounds eerily-similar to Millennium Thug from Nas’ “My Country.” He even shouts-out IllWill Records and The Bravehearts which makes me wonder if Millennium Thug realized how lame his moniker was a decided to go with Nashawn. If it is Millennium Thug that appears on this track under the name Nashawn, he’s just as bad now as he was on “My Country”-if not worse. If it’s two different guys, the both suck.

Another standout track features Prodigy’s Rakim-esque, baritone vocals on “P Broke The Switch,” a riding, funk-driven beat. “Thieves,” featuring Dilated Peoples, may be the most appropriately-titled track on this album, as it is the same exact beat as Nas’ “Poppa Was A Playa,” which begs yet another question: Was “Thieves” the first song to feature this beat (only to be given to Nas later), or is Dilated Peoples just rapping over an old beat for the heck of it?

This album lives up to it’s subtitle: 1st Infantry Mixtape. This is truly a montage of unfinished, unreleased and/or unpolished music. Still, it’s enjoyable solely for a “behind-the-scenes” glimpse at tracks which, for some reason or another, haven’t made the cut. It’s unfair to deduct points for a lack of cohesion because as a mixtape, there shouldn’t necessarily be much cohesion.