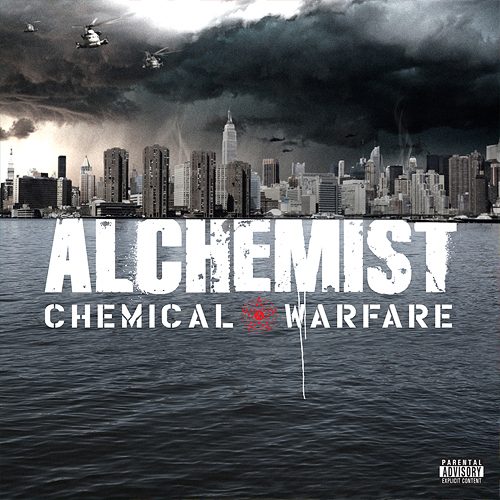 “Smiling so you know why you can’t hurt me.” Glimpses of the story of Alan Daniel Maman b/k/a The Alchemist are revealed through the “Smile” single off “Chemical Warfare.” As the opening croons “I hide my tears from the crowd, by smiling” one gets the feeling that even one of rap’s most successful producers, a man a half step away from being a household name, still feels the pain of having to struggle and strive to get ahead. It’s certainly been a long road for Al to arrive at this destination. In the early 1990’s it seemed as if Al had already peaked, forming a rap group called The Whooliganz with Scott Caan (son of actor James Caan) that was well enough liked to be invited into the Soul Assassins family led by DJ Muggs. After one single they were unable to get major label support to put out a full length album and the group disbanded.

“I hide my tears from the crowd…
By smiling
I go out and spend my money
So they can see, me smiling”

Alan hid his tears from the crowd and focused on learning behind the boards production from DJ Muggs – no small task given Muggs was already a legend in his own time. Muggs was not shy about teaching the eager young hip-hop artist how to set the right tempo, find the right samples, layer up beats and put out music for the streets. Slowly but surely Alan morphed into The Alchemist, becoming well known as the pounding sound behind so many underground classics from Dilated Peoples and Mobb Deep. The cheddar from his beats enabled Al to form his own imprint ALC Records. Hide those tears Al. You never have to fear being turned down by a record label again when you can put out music yourself. Smile! The Alchemist was smiling as he put out “The Cutting Room Floor,” proving that even songs left off other people’s albums were hits in their own right.

The success of the late 1990’s and early 21st century has in many ways been bittersweet for Alchemist given his name implies the ability to transmute lead into gold. While Al has used his magic time and again for other artists to take them to the top, his most successful solo album to date “1st Infantry” is still a few thousand units short of going gold five years after being released. The album remains a hip-hop favorite due to soulful tracks like “Hold You Down” featuring Prodigy and Nina Sky, the smooth falsetto of Devin the Dude on “Where Can We Go,” and even Soul Assassins comrade B-Real from Cypress Hill took the time to “Bang Out” on his beats. Alchemist kept busy after the album’s release, producing more and more hits for the rest of hip-hop, becoming an official DJ on Eminem’s “Anger Management” tour and making more underground mixtapes. It’s 2009 though and it’s time to put out another solo release in stores worldwide. We come full circle to “Smile” again, and while Maxwell does an able job setting the theme, it is the lush layers of organ and piano keys that really give Al and special guest Twista the room to breathe.

Twista: “Gotta get it how you gotta get it
That’s what’s up to family, I’m that committed
The only way that we can all get the cake
is if we get a pie how we got to split it
If you got a verse, you better spit it
If you see a job, you better get it
and if you can hoop, stay on yo’ pivot
cause the truth is this is life you gotta live it
Try not to travel down the wrong road, so that when your legacy is told
You was known to be a hustler who provided for his family and did it cold”

There can be little doubt Al is doing it cold on “Chemical Warfare,” an album that by its very name implies little regard for the welfare of others. There’s nothing silent about the deadly attack of “ALC Theme” opening the album though, proving that even in 2009 guest Kool G Rap is still one of hip-hop’s hardest. The beat sounds like “Agent Orange” by Cage was chopped up in a blender full of human growth hormone and protein powder – muscular and just a little crazy. There’s a method to Al’s madness though, providing a beautiful tinkling beat sweeter than candy as an all-star roster from Jadakiss to Pusha T to Snoop warn that acting stupid on the streets could cause you to “Lose Your Life.”

Jada: “Yeah see even the best die, respect my
Colombian necktie, you just can’t pass death by
You could be homey, cuz, neutral
God Body, nieta, king, Zulu
One thing about death it ain’t gon’ fool you
No reason to lie for, nuttin to prove to
While you still here though the devil’ll use you
Closed casket is how I know the bullets abused you”

There are no shortage of guest star spots on “Chemical Warfare,” including hip-hop’s most notorious pill-popper Eminem on the title track. Other big names to come through on Al’s beats include KRS-One on “Grand Concourse Benches,” Fabolous on “Some Gangster Shit,” Lil’ Fame from M.O.P. on “Lights, Camera, Action” and Juvenile and Three 6 Mafia on “That’ll Work.” REALLY. That’s not a typo – Three 6 Mafia and Juve the Great are rapping on an Alchemist track. There’s so much to say about the track that this review really can’t encompass it all, but suffice it to say hip-hop doesn’t hear from Juvenile often enough these days and that Al proves he can make a crunked out Southern hip-hop beat as good as any by DJ Paul and Juicy J. “Chemical Warfare” is full of these pleasant surprises though. At one turn you’ll get an all-star underground lineup like Blu and Evidence teaming with mainstream acts like Kid Cudi and Talib Kweli on “Therapy,” and at another you’ll get a pure West coast banger with Lady of Rage and Tha Dogg Pound vowing to smash “On Sight.” It may be that the only constant on “Chemical Warfare” IS Alchemist’s beats, but that’s enough to make it work – and like the futuristic battle it implies the album is filled with hits you’ll never see coming.