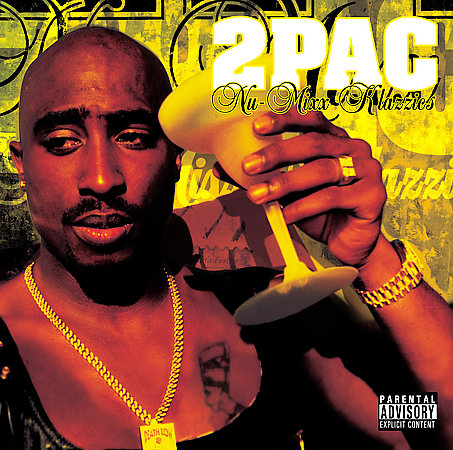 It’s often been said that no matter how hard you try, you can’t polish shit into gold nuggets. The opposite isn’t necessarily true. You can with enough planning, foresight, and effort rub the luster off of something that was once pure gold until it ends up looking like shit.

With apologies to fans of Tupac Shakur, “Nu-Mixx Klazzics” is just such an effort. Actually, the ones who should really apologize are Death Row. If you believe the hype stickered onto the shrinkwrap, these songs are “NEVER-BEFORE RELEASED REMIXES OF 2PAC’S GREATEST HITS!!” It’s important to take note of the phrasing here. These are not “never released before” remixes, which would be alternate takes on Shakur tracks recorded when he was still alive. These are “never before RELEASED” remixes, which means never before some idiot at Death Row conceived this album did they exist.

The word “idiot” isn’t being tossed around lightly either. The entire execution of this album is idiotic. The glib Soren Baker tries in the liner notes to dress up this crap as “another fitting tribute” to 2Pac’s legacy. I suppose everyone needs to get paid in these hard economic times, so I won’t pass judgment as harshly on Baker as I will on Death Row for trying to pass the way they mangled his music as any kind of “fitting tribute.” You can release a “Greatest Hits” album and have it be a “fitting tribute.” You can put out compendiums of his unreleased songs and soundtrack contributions as “fitting tribute.” It’s not a “fitting tribute” to strip his songs of the original beats that made them “classics” and insert studio musicians and new producers to make them “Klazzics.” Clearly, they even think spelling “classics” wrong makes it MORE classic, azz though they can rezzurekt Makaveli’z spirit with bad english.

Shakur must be rolling over in his grave. Not only did the shitheads at Death Row take liberties with the original beats Shakur made timeless with his powerful words and vocal tone, they blatantly stripped Snoop Dogg out of “2 of Amerikaz Most Wanted” and replaced him with Crooked I. It would be hard to ignore how awful this is, since they chose to make it the lead track of the album. Again I’m not going to hold it against Crooked I, he’s not a bad rapper per se, he just has the unenviable job of trying to do a better duet with Shakur than Broadus did, and do so posthumously at that. Not surprisingly, he fails miserably. Baker tries to gussy this up as “breathing new life into [an] already legendary recording.” Nice try, but I’m not buying it.

Savvy 2Pac fans should not be buying “Nu-Mixx Klazzics” either. Even those who don’t own the entire ‘Pac catalogue probably have “All Eyez On Me” and “Makaveli: The Don Killuminati” in their collection – and if they don’t they’d be better served to buy those two Death Row releases than this one album. “Nu-Mixx Klazzics” takes some of the best songs from both and turns them into the worst insult to Shakur imaginable, and then tries to reshine the shit back into gold by including b-sides like “Hit Em Up” and soundtrack cuts such as “Never Had a Friend Like Me.” Take our word for it at RapReviews, these versions are also abyssmal compared to the originals. Either buy the singles or albums they are featured on, or take a pass on them completely. Investing in “Mu-Mixx Klazzics” to hear them is like investing in the dot com boom in 2000 – seemingly smart at the time but ultimately a bad idea. There is nothing wrong with Shakur’s raps here, except for the fact that Nu-Mixxing his classics makes them unlistenable. Shame on Death Row for exploiting his fans this way, and for tarnishing his iconic status. It’s best to pretend this album doesn’t even exist if you haven’t heard it, or drink until you forget it if you did. Pass me a 40.