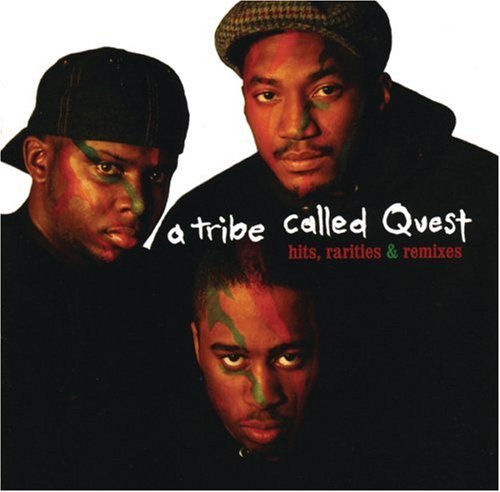 With the rumors of a new Tribe Called Quest album circling around the internet (sadly, sans Ali Shaheed Muhammad) it seems like an ideal time to take a look at “Hits, Rarities & Remixes.” While a compilation of Tribe’s greatest work was first issued in 1999 on the simply named “Anthology,” it came just a short year after “The Love Movement” had been in stores, before Tribe fans had even fully soaked in the realization the group was gone. Tribe was unfortunately their own worst enemy, following their trio of classic 90’s albums like “The Low End Theory” and “Midnight Marauders” with two mediocre releases not up to their own standards, let alone that of a fickle rap audience. By the time rap heads finished listening to “The Love Movement” even the most die-hard of Native Tongues fans had to admit it really was time for them to quit.

Like “Anthology” before it “Hits, Rarities & Remixes” attempts to relive those glory days when Tribe held a uniquely singular spot in the rap world: jazzy and sophisticated enough to appeal to learned music critics, yet funky and street enough for the b-boys to bop to in the clubs or boom it in their Jeeps. It’s not hard to get that buzz again from the songs included herein. The seminal “Award Tour” featuring Trugoy of De La Soul on the hook left many confused with the line “lyrically I’m Mario Andretti on the mo-mo” (a special type of steering wheel) but the smooth music from Weldon Irvine and Dizzy Gillespie was skillfully mixed by Ali Shaheed Muhammad into a rap classic. And to this day, hip-hop afficianadoes still argue over whether the hook of “Electric Relaxation” says “preset plan” or “please set-tle down” (I opt for the latter), but nobody argues that it’s probably the most mellow cool out song about “hittin’ skins” ever recorded.

Of course it wouldn’t be a Tribe retrospective without inclusions from “People’s Instinctive Travels and the Paths of Rhythm.” The anthemic “Can I Kick It?” (yes you can) is here, as well as the amusing narrative “I Left My Wallet in El Segundo” and their first huge crossover hit, “Bonita Applebum.” Q-Tip’s sly macking (“Satisfaction, I got the right tactics/and if you need ’em I gotCRAZY prophylactics”) on the track sounds just as good now as it did in April 1990. In fact, it’s a testmanent to just how skillful Mohammad, Tip and Phife were that none of their early hits have aged poorly. For those who may have only heard these songs on analog, the crisply perfect snares and soothing melodies of “Jazz (We’ve Got)” will be a STUNNING revelation in this digital presentation. There’s not a single bad note or lyrical mis-step to be found. From the bold and uproarious Phife-isms “crazier than Tupac in the flick called Juice/cock is longer than the hat worn by Dr. Seuss” of “Clap Your Hands” to the Tipster’s assertion that he’s “Abstract, orig-inal/ you can’t get your own and that’s — PITIFUL” on massive bass bomb “Buggin’ Out,” it’s as good as hip-hop ever has been, and may ever be.

Now as for the extra material, it’s here that “Hits, Rarities & Remixes” is sadly hit or miss. The album starts strongly with the seminal “Oh My God” remix, and does include two previously unreleased songs – the widely bootlegged “Mr. Incognito” and the much less well known “The Night He Got Caught.” These inclusions make sense, but why put “Scenario” on this compilation and not the legendary and powerful “Scenario Remix?” Early editions of “The Love Movement” included this song as a bonus track, as well as the rarity “One Two Shit” featuring Busta Rhymes. That album also got right something that this compilation gets wrong – adding the rap fan favorite “Hot Sex” from the Boomerang soundtrack. The resonance of that song is still so strong today that Mary J. Blige raps over the beat on her recent single “Love at First Sight.” Instead “Glamour & Glitz,” their contribution to the oscure rap film/documentary “The Show” is included instead. It’s a good song, but it’s not “Hot Sex.” The logic on the choices is largely incomprehensible. Why wouldn’t any Tribe archivist include the seminal and highly beloved “If the Papes Come” from the “Can I Kick It” twelve inch? Why not include Q-Tip’s remake of the T La Rock song “It’s Yours”? And while many rap and Tribe fans alike may have overlooked 1996’s “Beats, Rhymes, and Life” there’s no reason this album should have left out songs like “1nce Again” and “Stressed Out” – the latter of which at least made it onto “Anthology.”

Ultimately the problem with any Tribe comp, whether the first attempt or this latest one, is that they simply have too much fantastic music to fit into one disc alone. By virtue of being some of the greatest rap songs ever recorded “Hits, Rarities & Remixes” could be called a success. However, the individual songs on the album already WERE a success the first time around. To repackage them once, let alone twice, something far more significant has to be offered in the way of extras and self-described “rarities.” This album would have fared far better if Jive had released it as a two-disc set, with the “hits” on disc one and the “rarities and remixes” on disc two. That way, the scope of their chart-topping jams could have been greatly expanded, and the amount of stellar and/or seldom-heard Tribe songs would truly have been done justice. What’s here is good, but what’s not may make you question the purchase if you already have “The Love Movement” w/ bonus tracks and “Anthology” to boot, let alone a die-hard Tribe fan who owns the whole catalogue.