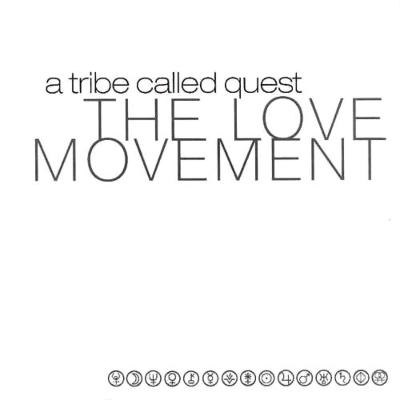 In every hip-hop crew’s career comes a climax — a defining moment of greatness that can never be duplicated. This period can produce music of unsurpassed quality, legions of die-hard fan(atic)s, and CD’s which are hailed as classics forever heralded in hip-hop history for all hungry young heads to marvel. This pinnacle of excellence can be a sublimely beautiful thing, and few groups are able to find that niche twice in a lifetime. Unfortunately for A Tribe Called Quest and TCQ’s admirers, their moment came over 5 years ago.

There is definitely an innovation problem when the best song on an LP is a bonus track that was recorded 2 albums ago as “The Love Movement,” the fifth and allegedly last full-length album from Q-Tip, Ali, Phife, and Jarobi, proves to the dismay of its listeners. The 15+ track creation begins with a warm spark of potential that somehow never quite smolders.

This is not to say that Tribe does not have gems; the quartet always shines with lush, layered production that does not compete with words. Low end Theory/Midnight Marauders fans in particular will love “Like it Like That,” “The Love,” “Hot 4 U,” the plethora of bonus tracks contained on the limited edition of the CD, and even the trippy MC-less “4 Moms”.

Quest permeates a theme of love throughout this final collection, and for that they deserve respect. Few groups have the skills and confidence required to create a bold concept album such as this. However the CD’s intentions far outshine its output, flowing along in such an unimpressive yet noble manner that the listener almost feels as if appreciating it in all of its mediocrity is the politically correct thing to do.

If it seems that the lyrics on “Love Movement” are some of Tribe’s most uninspired to date, that 90% of the songs have the same sparse beat (boom-chee-boom-boom-chee), that most of the songs sound the similar, and that there are more filler tracks than on the dome of a balding hood rat, you are probably on-point. The entire project seems curiously rushed and serves more as the completion of a collection for Tribe’s most ardent fans rather than an album that the hip-hop community as a whole will be eager to bump. TCQ does it all for the love, but the rest of us know that love without passion is just…well…dull.