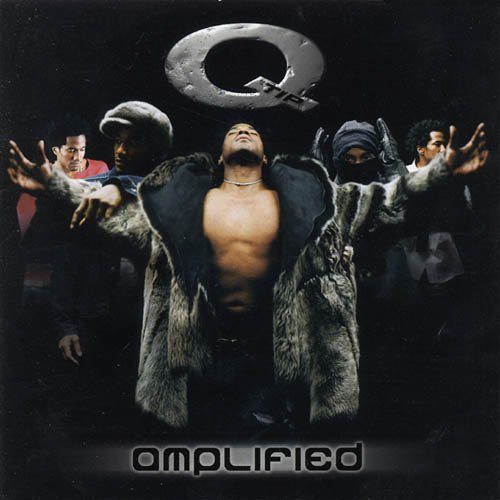 Boom. Finally. Behold: Q-tip’s AMPLIFIED, the long awaited. Though we had been blessed with a few single tracks previously, the 1st possibly being “the lone ranger” released over a year ago, and the second being the unlikely club hit “Vivrant thing”, most headz all waited with bated breath. Finally. So I pop it in.

My past classes in physics taught me that all sound is basically a sinusoidal wave. My math class instructed me that all sine waves have an oscillating, up and down motion with crests and troughs. Highs and lows. Just like this lp. Impossible? Well, the record starts off with “wait up”, a type of uptempo, piano filled intro with no real direction. Though not stellar, the production was what I expect: abstract. It’s just an intro, right? But then, the following song was a very boring, cuss-filled, uninspired track. A definite trough. Is this the Ab? As I struggled to understand, the following track started, “breathe and stop”. I never thought this song to be that ill, however at this point it was well received. With the next song, the album once again suffered a drop in amplitude: more boring beats with rhymes very uncharacteristic of Q-Tip. The next track had a promising beginning, with a simple drum loop, supported by a fat bassline and crowned by a two bar guitar sample. The song’s subject matter however was left to be desired for, as he dedicated the song to all low riders etc… rhyming about rides and such (??). Again, very unQ-tip. It was not until track six was I finally rewarded with the signature genius of the Abstract. “things we do” had a humming bassline, and a staccato piano and that rim shot snare that I remembered so well from classic Tribe. This was the 1st juicy offering from the lp, in beat, lyrics and chorus. Very nice. Kudos to the Ummah.

The rest of the lp however, followed this previously described pattern, bottoming out at times, and getting your attention other times like the time he was joined by long time comrade Busta Bust for a duet “Get down” (assumption as the song titles was apparently omitted). But even that track left me confused, ending prematurely with Q-tip laughing hysterically, and Bust Rhymes playing The Madd Rapper, ranting and raving at the soundman. Just when I thought that I had heard the worst of it, then came the next track. The only description possible was Q-tip meets Trent Reznor (Nine Inch Nail). Possibly Q-tip meets the AFNAP? The song was filled with an abrasive electric guitar solo, and screaming that could only be compared to P Diddy’s on Nas’ “Hate me now”. The following track and possibly the best content wise, was “end of time”, the story of his ascension in the rap game. A simple beat with texts describing events, good and bad, during his career. A very honest introspection that he purposely shares with listeners, touching quickly on subjects that had made past headlines in periodicals. And suddenly, the lp was done.

Could the last song be of some sort prophetic? Though new to the solo game, Tip has been around for more than a minute. However, by the sounds of this amplifier, the voltage is low and the source of power may be dying away, Ummah or not. Q-Tip’s “Amplified” will unfortunately not be blowing fuses on speakers anytime soon and ironically, these beats unfortunately lack in rhyme and life.