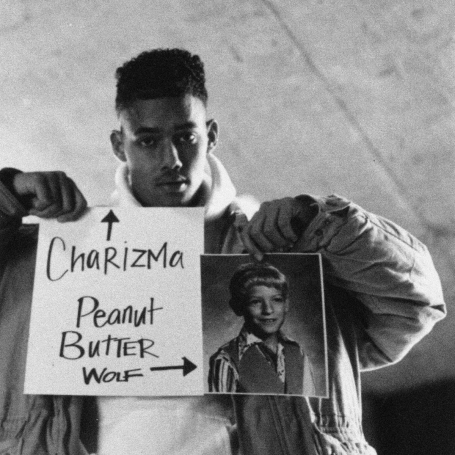 This album is as unlikely as they come. Charles Hicks, the rapping half of this duo, has been dead for over a decade. There’s no intention to shock or offend with that statement, it’s just something to bear in mind as you read this review. “Big Shots” was originally recorded with the intention of being released on Hollywood BASIC, but Charizma’s untimely death in Dcember of 1993 shocked his producer and friend Wolf so much that the already recorded material was put on the shelf while Wolf went on hiatus.

Like KRS-One after Scott LaRock’s death, Wolf returned to the hip-hop world stung by the needless tragedy but more determined to make an impact and a statement with his life. After finding success as a producer on his own, the enterprising Wolf would go on to form Stones Throw Records, today one of the best recognized and respected of labels in indie hip-hop. Clearly though, Wolf was still haunted by what happened to his close friend Hicks, because the first single Stones Throw released was their track “My World Premiere.” Seven years after the rap world got their first taste of Charizma, Wolf has at long last polished their unreleased album to a shine he feels worthy of sharing with the public.

If you’re old enough, think back to what you remember was fresh in 1993. Think about the artists and albums that excited you. Cypress Hill. Digable Planets. Wu-Tang Clan. A year in which Snoop Dogg was not an industry veteran, but Dr. Dre’s newest protege with a much anticipated solo album in the wings. To evaluate this “new” album, “Big Shots” must (as best as is possible) be considered in this context. As such, Charizma is a good MC for his era. He has the Project Blowed sound of Aceyalone vocally, the straightforward no-nonsense flow of Nas, and a style that lives up to his nom de plume by grabbing your attention. On the production side, these early works of Wolf are on par with any of the best beat maestros of the day. On “Devotion” he slings notes like a young Diamond D. “Ice Cream Truck” is some smoothed out “Peachfuzz” K.M.D. type shit. “Soon to be Large” is the type of bomb Pete Rock could have dropped if he worked with the aspiring rapper, sans horny horns. “Methods” is a spacy sounding suave song which would have fit into “Bizarre Ride II the Pharcyde” perfectly. On and on and on, to the break of dawn, the music on “Big Shots” is type strong like that.

Peanut Butter Wolf was clearly coming into his own working on this album, and would eventually go on to create “Peanut Butter Breaks” that would bring him acclaim in the underground the world over. As for Charizma himself, he clearly had promise as an MC. Promise enough to make him listenable on this album. For those who have heard “World Ultimate” by The Nonce, one may be struck by how similar he is to that group’s producer/rapper Nouka Base. Their song “Mix Tapes” was a friendly, upbeat, likeable jam, but it also showed Nouka to be a simplistic rapper whose words could not grab your attention like his voice or beats did. Far be it from one to speak ill of the dead, but for better or worse Charizma is this type of MC. If there’s such a thing as being too nice, Charles Hicks may very well have been guilty of it. “Tell You Something” has an intimidating title, but Charizma is still as sweet as a sugar cookie:

Listening to Charizma rap, the closest he comes to being foul-mouthed is the sentence “I like hip-hop, you like R&B crap.” Intimidating? No. Charizma’s personality may have won him friends and fans, but in a battle over who is more hardcore he’d probably lose to Will Smith. While this may sound like a fatal indictment of “Big Shots,” it’s really not. In some ways, it’s refreshing to hear an MC this sincerely nice, one who clearly believed he didn’t have to follow the gangster rap trends that were starting to dominate hip-hop on the West coast in ’93. At the same time, he avoids the trap of sounding like a polka dot joke like Kwame or a quickly forgotten rapper-of-the-minute like Redhead Kingpin. No pun intended, but on the strength of his charisma, Hicks could have had a long career in hip-hop. With Peanut Butter Wolf at his side providing beats, the two would no doubt have gone far; and given time to develop his raps the C in Charizma might eventually have stood for Complex too. Like Dooley-O’s “Watch My Moves 1990” though, this album is an artifact of a bygone era unearthed like a fossil and put on display for all hip-hop to see. While it would have sold well back in the day, today’s hip-hop fans may be more interested in Wolf’s music than Charizma’s lyrics. That’s a shame, but no one’s to blame. We’ll never know what the charismatic MC would have done if he was still alive today. With this release, Charles Hicks, rest in peace.