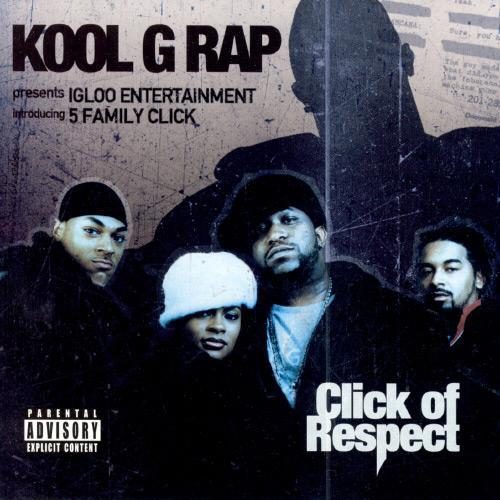 To mull over Kool G. Rap’s place in hip hop history, although no less important, would be an exercise in redundancy. Simple said: He’s one of the greats. Whoever coined the term “gangsta rap” likely had Kool G. Rap in mind. As true as this is, it’s equally true and equally important that he is thought by most to be one of the most gifted ever; indeed, his rapid-deliver rhyme style is complimented by an impeccable flow and timing with the hint of a charming lisp. All history aside though, it’s a tough world to say on top of forever. And with “Click of Respect,” Kool G. Rap attempts to bring his crew to prominence as well as re-establish himself in the upper-echelon of today’s rappers. But as is the case when so many rappers put on their crew, Kool G.’s proteges can’t quite live up to the name of the mentor with whom they’re associated.

As one might expect, the majority of impressive lyrical displays on “Click of Respect” belong to Kool G. Rap himself. That’s not to say Glory Wars, Hammerz, Ma Barker and Nawz detract from the album, but none of them really add anything either. It’s safe to say most who cop this album are doing so to check Kool G.-and rightfully so. Over the years, he has earned the respect reserved for artists who have fans that buy their album simply because it’s said artist’s work.

In terms of production, there’s nothing ground-breaking here, but that’s not necessarily a bad thing. With an artist like Kool G., who has had so much success in the past, there’s no need to re-invent the wheel. All the beats are heavy and most are dark throughout, matching the topically prevalent themes of the street struggle. Of course, this theme is not to be confused with the pseudo-ethnic, mob mentality concept albums which were particularly common a few years back, which also pops-up at times-but hey, this is the original gangsta, so it’s forgivable. The slower-paced “Cold World” is a nice example Kool G. Rap’s lyrical prominence and ability to adapt:

“Mama you left me on this cold earth
Now my soul is cursed
From birth I was doomed for the worst
From the womb to the hearse
My wild was hot but never groomed for the dirt
Age sixteen and now be soon to convert
Bringing gloom to the turf
Whole blocks and spots boomin’ with work
Had to, color kids up put maroon in their shirt
Too scheist to value life, I’m assuming they worth
Buck heat at the weak”

“Click of Respect,” however, is not without its fair share of current fads like the repeated use of the sped-up soul sample (on three different tracks), which is quickly becoming an industry clichÃ©-if it’s not already. The up-tempo beat and catchy horns of “Breaker Breaker” is reminiscent of “Legendary Street Team,” a track Kool G. ripped along with M.O.P. This track is vintage Kool G. as he displays his most menacing lyricism. The hardcore is welcome here and on other tracks like the pulsating “Get the Drop On ‘Em,” and “Gully.”

Unfortunately, there are a few tracks that fall terribly short in production and, as their titles would indicate, are pretty pedestrian like “On My Grind,” “Pimped Out,” and even Kool G. Rap’s usually-solid lyrical performance on “Slide in My Whip” is undermined by a lame beat. Overall, this album is pretty good. Kool G.’s place in hip hop history is undeniable, regardless of what he releases from here on out, which means anything he can do from here-on-out can only add to it. To make a sports analogy, it’s not unlike Jordan’s return with the Wizards: No, he wasn’t half the player with the Wiz’ that he was in his prime, but he’s still the best player of all time.

The Catch 22 here is that one of the primary goals of this album is to impress the listener with the new, young talent. But, as far as impressions go, Kool G.’s crew, The Five Family Click, doesn’t really do much to endear themselves to fans or convince fans to cop one of their albums if Kool G. wasn’t on it. They’re definitely not bad, but for many of us, “not bad,” by itself, isn’t really worth checking for. The only MC that stands out-aside from Kool G. Rap-is Ma Barker, and, unfortunately, that’s because she’s female. To make another comparison, how many people would really check for The Bravehearts’ upcoming album if they weren’t aware that the group was associated with Nas? Regardless of the history of the main member or the obvious intentions of the association, it’s still solid product and worth looking into.