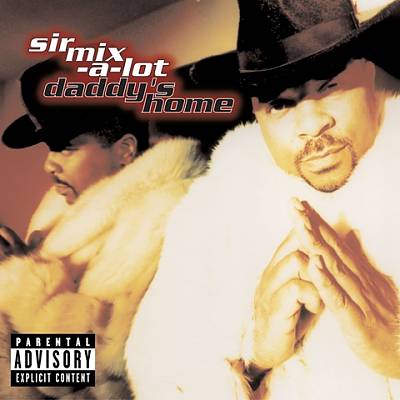 For Sir Mix-A-Lot fans, the long drought has finally come to an end. “Daddy’s Home” represents the artist’s first new album since 1996, although Rhino Records released a “Beepers, Benzos & Booty” compilation in 2000. A “Greatest Hits” compilation. Yup. Sir Mix-A-Lot received the infamous kiss of death. Many rappers have gone on to release albums after their “Greatest Hits” compilations, but it’s usually a sign that everything in their catalogue worth hearing has already been done, and said rappers start to be perceived as dinosaurs who didn’t realize they’re already extinct. For some artists like the Fu-Schnickens, the “Greatest Hits” album can even be the death knell of an aborted rap career that never got started to begin with. For those who continue to record and release, they usually end up on smaller (or indie) labels, and experience the law of diminishing returns firsthand in album sales and the size of venues they can play in.

Mix-A-Lot is far from ready to be declared a fossil. While rumors had him in retirement, or trying to cut a rap/rock album with Presidents of the United States (best known for their hit “Lump” which was later parodied by Weird Al Yankovic) as a group named Subset, no news came out either way and no new albums materialized. “Daddy’s Home” hit stores with no warning, no press release heralding his return, and no buzz whatsoever. Then again, that may be best considering even rap fans only know him for “Baby Got Back” and probably never heard the two albums before “Mack Daddy” or the two that followed. Those who’ve been down for Mix-A-Lot since his seminal “Posse on Broadway” days though will be happy to know ain’t nothin’ changed except the date on the calendar. 15 tracks and close to an hour’s worth of music make up “Daddy’s Home.” As a rapper with a reputation for some of hip-hop’s raunchiest songs outside of Too $hort and the 2 Live Crew, Mix-A-Lot doesn’t dissapoint. The self-produced “Candy” has a pounding beat and the pimped out Seattle superstar teaching mack lessons to busters:

“The pot gets thick for the super-trick
The regular customer, who can’t hit
She put the game in drive, rubbin on thighs
Lookin in his eyes with lies and a trick cry
Story got deep
Bout payin the rent, plus the Jeep
She said strippin don’t pay well
Tryin to go to school workin motels
OHH SHIT! The trick put his cape on quick
Tryin to save another chick
Boy’s wife is broke, his mistress is rich
How you figure that shit?”

Of course, it wouldn’t be a Mix-A-Lot album if there wasn’t some bragging about sexual “big’uns” – big booty, big titties, and in this case a “Big Johnson.” Sir Mix-A-Lot is fed up with fake ballers bragging about the size of their manhood, and calling out the frauds who stuff their jockeys with socks:

“And only five percent of men got nine and up
But eighty-five percent say they can’t fit a cup, now whattup?
Somebody gotta be lyin, cause I am
Claimin bout twelve on the hit-me scale
But the truth is the six to eight range, you hang
Just like the average Joe Plain, fool!”

Mix-A-Lot doesn’t focus solely on freaky tales though. In his early days he earned and kept a rep as one of rap’s braggadocious best, and as he rightly points out he was pushing a Lamborghini when most people didn’t know how to spell it. On “Y’All Don’t Know” he raps to the Adam Ebel beat and guitar playing to bring people up to speed on his struggle to reach those pinnacles of success:

“By 1990 I’m double platinum
If homies is starvin I’ma fatten ’em
Cause now we ratpackin ’em, baby backslappin ’em
Built my own studio so we can mack back at ’em
Don’t believe the ‘One Hit Wonder’ shit
Cause before +Baby Got Back+, Mix was rich
A little +Broadway+ dough, a little +Hooptie+ dough
A little +Beepers+ dough, all before the nine-oh
The lawsuit hit in nine-one
All of a sudden the rap game’s no fun
A big ton of bricks hit my bank account quick
Tryin to break a brother down, seven figures not six
But unlike most this rapper don’t blow smoke
And I do not like broke, I must increase my gross”

And by releasing “Daddy’s Home,” Sir Mix-A-Lot definitely aims to increase. One way he’s keeping his own bank is by doing most of the tracks himself. This works better than one might have expected. Mix-A-Lot has a strong knack for pulsing bass and pounding drum tracks, and makes it fun by breaking song conventions with tracks like “2 Horse.” He inserts braying equines and beat breakdowns into the track, and with a woman cooing “ride baby, ride baby” it takes Ginuwine’s “Pony” to a whole new level. On “Nasty Girl” it’s all about sounding appropriately sleazy, a theme he also keeps in effect on the horny horn “Poppi Grande.” He takes it to the old school with the smoothed out “Game Don’t Get Old,” but as modern as a Slip-N-Slide track on “Resonate.” Other producers do spit tracks here and there, such as the futuristic “Big Ho” by Strange, and E-Dawg’s work on “At the Next Show” and “Party Ova Here.” For the most part though, it’s Mix-A-Lot’s show – musically and lyrically.

To bottom line the review, “Daddy’s Home” is a strong return to form after the long absence since “Return of the Bumpasaurus.” While some might have been concerned that Mix-A-Lot’s style and flow would sound dated, he’s impressively contemporary and possibly a little more polished after his time away from the industry. Lyrically Sir Mix-A-Lot still remains a strong storyteller, with a pleasant voice that’s distinctively Northwestern and vibrant with the authority of a two decades old veteran. After fifteen years in the game and a Rhno release immortalizing his successes you might think the veteran would retire and live off his royalties, but “Daddy’s Home” sounds like the start of a whole new decade of hip-hop hits. The album is strong enough to stand on it’s own, but by linking up with today’s hot young rap stars and producers (imagine a fat Neptunes beat and a duet with Pharrell) he’ll be wrecking the charts from coast to coast with his next CD.