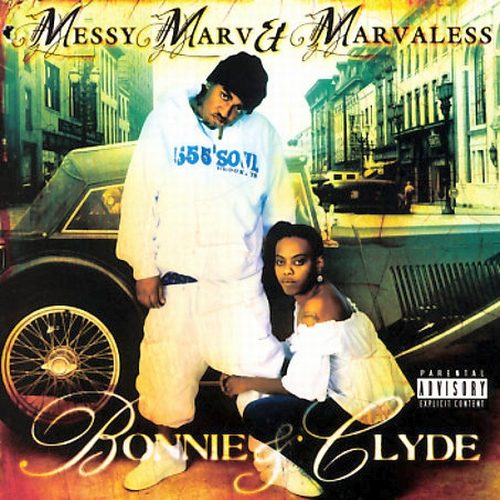 “You’ve read the story of Jesse James
of how he lived and died
If you’re still in need of something to read
here’s the story of Bonnie and Clyde
Now Bonnie and Clyde are the Barrow Gang
I’m sure you all have read
how they rob and steal and those who squeal
are usually found dying or dead
There’s lots of untruths to these write-ups
they’re not so ruthless as that
Their nature is raw, they hate all law
stool pigeons, spotters, and rats
They call them cold-blooded killers
they say they are heartless and mean
But I say this with pride, I once knew Clyde
when he was honest and upright and clean”

(from “The Story of Bonnie and Clyde” by Bonnie Parker)

One of the most famous couples in American folklore, Depression era bank robbers Bonnie Parker and Clyde Barrow still capture the imagination of many. Immortalized in a motion picture that would become one of the most important in American film history, the Bonnie and Clyde saga reflects this nation’s well documented fascination with crime and punishment, its urge to make heroes out of outlaws before bringing them to justice.

Over the years, several songs have told their story, the most widely known being “The Ballad of Bonnie and Clyde” by Georgie Fame. Country and rock music have had their share of Bonnie and Clyde songs, but so far rap music’s contributions seem to have gone unnoticed. As of this writing, there are at least six rap songs that bear the two names in their title, Eminem’s twisted adaption “’97 Bonnie & Clyde” included. Even though Donald-D described a clearly Bonnie and Clyde-inspired couple as early as 1989 in “Car Chase”, and a handful of hardcore female rappers expressed loyalty towards a wrong-doing mate (such as Paradise with 1992’s “Down With My Nigga”), the criminal couple concept got planted firmly in hip-hop’s consciousness when Apache’s “Gangsta Bitch” elevated the woman, who until then wasn’t perceived as an equal by most rappers, to co-d status: “She’s got charm, a firearm to match mine / goin’ to the movies packin’ his-and-her nines / wearin’ Carhartt and leather, motherfuck the weather / on Valentine’s Day doin’ stick-ups together…”

Yo-Yo and Ice Cube were probably the first to name a song after the duo (1993’s “The Bonnie and Clyde Theme”), and soon enough the song format infiltrated the pop market, as The Notorious BIG (“Me & My Bitch”) and 2Pac (“Me & My Girlfriend”) both explored the topic. Jay-Z then did a string of duets with Foxy Brown, one of which was called “Bonnie & Clyde Part II” even before he remade the 2Pac song on “’03 Bonnie & Clyde”. Since then, there have been plenty of rap songs that praise romantic but rough relationships. In fact, you can link up the majority of today’s thuggish love songs in black music to the original Bonnie and Clyde myth.

It took, however, the ever-busy Northern Cali rap scene to come up with a full-length called “Bonnie & Clyde”. This collaborative effort between Messy Marv and Marvaless wouldn’t be worthy mentioning if it didn’t present some decent music or if it was just another phoney ‘collaboration’ album trying to fool the fan into thinking the advertised rappers will really perform together. But unlike similar Northern Cali albums that do just that this one is the real deal. There are 11 full songs on this CD, 8 feature Messy Marv, Marvaless and no one else, 2 are solo tracks, 1 is a preview of another upcoming joint venture. For those not familiar with either of them, Marvin and Marva have been putting it down for mob music since the mid-nineties, he in San Francisco, she in Sacramento, her solo debut “Ghetto Blues” dating back as far as 1994. Ironically, she ALREADY did the Bonnie & Clyde thing, with Killa Tay on her album “Fearless”, on the appropriately titled – you guessed it – “Bonnie & Clyde”.

This is quite a long-winded introduction for an album that basically repeats the same gestures these rappers are already well known for. But even though they lack the means to elevate this album to some sort of cinematic status, Messy Marv and Marvaless put their own very twist on the concept. First of all, they’re not lovebirds. Kinda defeats the purpose then, you might object. But anybody familiar with these two knows that romance is not what’s primarily on their mind. The type of romance that attracts rappers like these to the Bonnie and Clyde story is the one surrounding the law-defying criminals who have each other’s back until death do them part. Another thing that distinguishes this album from the Bonnie and Clyde visions of the aforementioned rappers is that the male doesn’t patronize the female. Both are on equal terms and ultimately independent.

Sure, she speaks for her solo self as well, but when Marvaless says, “I’m like, get yo own, came into this bitch alone / so I’m solo till I’m gone / until they make a Marv clone,” it’s also her Bonnie that speaks. She’s not just a gangster’s moll, she’s a gangster herself. And while Mess, who once wished “Death on a Bitch” with an album title, spews multiple misogynist comments throughout the album, she has her own track to get back at men. Obviously, “Bitch Niggaz” isn’t particularly politically correct either, when she adapts Kurupt’s infamous line “bitch nigga, you more of a bitch than a bitch,” adding, “when your partners ain’t around you probably fuckin’ with dick.”

Sensitive minds will find a lot to be offended by on this album brimming with tough talk. Mess and Marv compete for who’s the sharper pimp on “Real P.I.”, he bragging: “My fine hoes broke, but they got on furs / a real pimp cop his, then a pimp cop hers,” she replying: “Brothers always talkin’ ’bout they got the game on lock / when it comes to female mackin’, this shit don’t stop.” Usually though they do their thug thizzle as a team, as evidenced by drug tales like “What You Want” and “In the Traffic”. “La Familia”, the musically most surprising track, rallies all “black and brown gangstas” over a Latin-tinged track. The term Latin might evoke the usual danceable ditty, but this one is quite different. Backed by a strong bounce bobbing in forward motion, it’s sprinkled with a lonesome Mexican guitar howling across the desert and an equally impressive female voice hauntingly singing “la familia mia no se puede lastimar / unida in sangre, no se puede conquistar.”

Other songs one might consider not completely ignorant are the piano-driven “Goin Thru Some Thangs”, with some touching turf politickin’ by Mess, and “The World Is a Ghetto”, which is not as insightful as the title might suggest, but still gets its point across:

“You wouldn’t understand the ghetto, nigga, life is hard
runnin’ round cookin’ powder in a mayonnaise jar
To each his own, I live in the zone
where every day is ’bout trigger play, sellin’ your stones
Welcome to my world, the place I call home
My nigga, fuck the police, forever it’s on
Shit, his mama, my mama, they all smoke
The cold part about it, they askin’ us for the coke”

Maturing over the years, both these rappers have become solid performers. Especially Messy Marv shows that he can handle almost any type of tempo and track. It’s his well measured aggressiveness that carries this album, and it works surprisingly well even over a mellow beat like “I Am Rap”. Marvaless is just her usual bad self without any of the caprices female rappers normally feel they have to display. Still, it would have been beneficial if she had gotten more involved in the Bonnie character. It was, after all, Bonnie Parker who posed for photographs with guns and wrote poems like “The Story of Suicide Sal” and “The Story of Bonnie and Clyde” while on the run and sent them to newspapers, increasing publicity and popularity of the Barrow Gang. In comparison, Marvaless keeps a decidedly low profile.

But all this is probably too much to ask since they can’t even decide if there’s a love story happening between them. Listen to the first song, “Waitin On You”, and you won’t be able to tell for sure if they’re supposed to be lovers or not. And if they are, they sure know how to hide it, “Waitin On You” making it seem like they already break up at the very beginning of the album. Says Marvaless, disillusioned: “You can run the streets with yo thugs, make sure you take care of home / go fuck that bitch you fuckin’ with, come back and everything gone / shit, I could see if I was the average, but I go all out for real / downer than your closest homie / maye all this shit is phoney.” He replies: “I need a hustlin’ bitch / see, you, you a punk-rock, a steady-keep-fussin’ bitch / yeah, I fucked a bitch, but she broke bread / and you always keep your mouth shut and she broke head.” Damn.

So there you have it, “Bonnie & Clyde” the album. While it contains absolutely nothing we haven’t heard before, it’s still a fairly solid affair if you’re into that sort of stuff. Like me, for instance, glad to have come across a disc I can finally put up to full blast. Producer Tron Treezy (replaced by Sezarino on two tracks) serves up some classic, catchy mob music, varied enough to appeal to a larger audience. Combine that with quality cover art and interjected movie quotes, and you got a satisfying rap album, as haphazard as it may ultimately be… Indeed, like their source of inspiration, Messy Marv and Marvaless are ruthless gangsters. But unlike the real Bonnie and Clyde, they don’t try to make themselves look any less ruthless than they are. That’s no way to ever reach legendary status. And while the real Bonnie and Clyde went down in a proverbial hail of bullets, Mess and Marv escape unscathed from this short episode. Still, if you can’t buy into the Jay-Z/BeyoncÃ© Knowles stunt, why not give the REAL ’03 Bonnie & Clyde a chance?