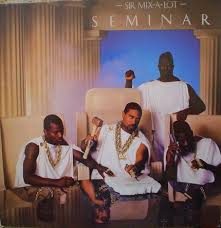 Remember thick gold chains? Four finger rings? Rappers wearing togas? Okay, probably not the last part. But if you look at the cover of Sir Mix-A-Lot’s 1989 album “Seminar,” you’ll find all three items represented. The Seattle sensation was going for the look of ancient Greece, crossed with a black power rally. As odd as it looks, one thing makes perfect sense – Mix holds a heavy mallet in right hand as his left chisels out the album’s title on a stone tablet. Sir Mix-A-Lot was the hardest rapper coming out of the Pacific Northwest, so no matter how absurd the cover lesser MC’s were still wishing to be in his position, carving out a name for himself nationally and globally.

Originally released on Nastymix Records, the Sir Mix-A-Lot catalogue and the budding rap star were both picked up by the Rick Rubin imprint Def American (now known as American Recordings). It’s a testament to Mix-A-Lot’s staying power and popularity that this 14-year-old album is still in print today, but it’s even more telling to read the back cover. “All songs written, composed, programmed, performed, produced and engineered by Sir Mix-A-Lot.” Anything left out? Nada nada nada, not a damn thing. If ever there was a rapper who believed in the DIY aesthetic, Sir Mix-A-Lot was quintessentially it.

Mix-A-Lot was best known at this point for his street anthem “Posse on Broadway” and comical hits like “Square Dance Rap” and “Buttermilk Biscuits,” which featured his voice sped up to Chipmunk octaves. On the title song and lead track “Seminar” though, Mix-A-Lot is all about business. The song opens with heavy bass drops, blends with a reverberating church bell, then comes together with a strong drum track. It’s classic late 1980’s rap, hard and uncompromising, just like his “listen up close or you might get smoked” lyrical attitude:

“Some say rap has become repititious
Mixin up beats over old break jams
Some hate me, some imitate me
But take me out, I’ll be damned!
This album is a demonstration of various styles of a hip-hop art
I got paid, but I do it cause I love it
All enemies hush! Let the seminar start”

This song is also noteworthy for Mix-A-Lot’s explanation of what a “snack pack” is – a fine woman who is “little in the middle but she got much back.” Given Sir Mix-A-Lot’s penchant for sampling from his own songs, this phrase would in a few years be known from coast to coast on his smash hit about the glutteus maximus. Never afraid to be cutting edge, Mix-A-Lot followed up the first cut with an ode to “Beepers,” back when they were still so new (and in some cases expensive) rappers often wore them as a fashion statement:

“Sky Pager looks like a Phaser
That’s the attire of a Northwest player
San Jose, I got a show
Chillin like a champ with a girl in the limo
There we go again, I got a beep
The girl got nosy beggin for a peep
Get off me girl! This is business
I’m workin it and you can’t witness
An Oakland skeezo, how do I know? Cause 4-1-5 was the area code
Turn it off, turn it on, so I won’t get busted
You know rap stars never get trusted
Baby wanna get so I put it on vibrate
How does Mix-A-Lot communicate? With beepers, baby!”

Give the man his due, he wrote this ode to paging two years before Q-Tip and his fellow Tribesters penned “Skypagers” on the “Low End Theory” album. Sir Mix-A-Lot’s anthems weren’t just to his status or his gadgets though. In fact, his song “National Anthem” was controversial enough back in the day that Bill Maher would probably lynch him for it if released new in the post-9/11 era. That’s the point, in fact. We treat those who would speak out about injustice like terrorists who hate America, when the witch hunts of John Ashcroft and G. Dubya are no different from branding people communists in the 1950’s or discrediting leaders of the civil rights movement in the 1960’s. Like KRS-One, Mix-A-Lot is not afraid to question why God should in fact bless America:

“The Pentagon had a plan for a rescue
They said intelligent never makes miscues
The thirty-first was a day of death
Lieutenant Colonel Higgins, you know the rest
No negotions with a terrorist force
But Iran’s still buzzin offa Oliver North
The Ayatollah’s dead but the heart’s not gone
The burnin of the flag in Iran goes on
Anti-American, we’re loved by few
We pay big money to the ones that do
The Christian Militia, they give us big knowledge
But the Pentagon messed up and wouldn’t acknowledge
Ollie took orders from the number one man
But the crap hit the fan and superiors ran
Democrats tripped, the committee said can ’em
Now I’m ashamed of my national anthem”

It’s amazing how well balanced this album is. Only three tracks into the presentation, Mix-A-Lot has been by turns serious, braggadocious, and political. On “My Hooptie” Mix flips the script and gets a little bit silly. If the slang is too arcane and you don’t know what a hooptie is, Mix will break it down:

“My hooptie, rollin, tailpipe draggin
Heat don’t work and my girl keeps naggin
Six-nine Buick, deuce keeps rollin
One hubcap cause three got stolen!
Bumper shook loose, chrome keeps scrapin
Mis-matched tires, and my white walls flakin
Hit Mickey D’s, Maharaji starts to bug
He ate a quarter-pounder, threw the pickles on my rug
Runnin, movin, tags expired
Girlies try to diss and say my car looks tired
Hit my brakes, out slid Skittles
Tinted back window with the bubble in the middle!
Whose car is it? Posse won’t say
We all play it off when you look our way
Rollin four deep, tires smoke up the block
Gotta roll this bucket, cause my Benz is in the shop
My hooptie!”

On a personal note, the car I was driving when this album came out could match this description in a lot of ways! Between this and Chuck D’s rap about “suckers to the side, you know you hate, my ninety-eight” I felt like my ride was well described – well, except that it was a Delta 88, but you get the idea. I had a little trouble relating to “Gortex” though, and to this day I don’t think I’ve worn a single pair of their boots. Sorry, I’m just a Timberland kind of guy. The song does have a pleasantly simplistic drum track and rap style, which must have made Rick Rubin smile ear to ear. I usually skipped past it to “The (Peek-A-Boo) Game” though, the Mix track exposing the dangers to women of exposing themselves for money (or for sex):

“She’s seventeen, but claims to be eighteen
Boss on her tip in the back, they do the wild thing
Sayin please won’t get this sleaze to skeeze
Goes this skeeze only G’s for fees
Only works late, downtown 1st and Pike
Yours for the night, if the money’s right
She’s a stripper, an Avenol sipper
Down with the zipper, cause nobody wants to kiss her
She’s the peek a boo pro – yeah you know!
Sportin high heels and swimsuits, dancin at the strip show
Used to have a real name now they call her Cocoa
Cocoa went loco so they paid to see her solo
Dancin on the stage, crowd’s a rage
They fill up the garter belt to keep the girl paid
It’s a trip cause the girl’s clockin dollars with her hips
Like a ape doin flips for gratuity tips
Such a shame, she’s lookin up the deep throat fame
A porno queen with a plastic name”

Before things can get too somber and moralistic though, Mix comes back with another braggadocious track, “I Got Game.” Depicting himself as the Captain Save-A-Ho of the 1980’s, this song includes another line that would eventually go on to greater fame in “Baby Got Back” a few years later:

“Here’s a little somethin for you whacked out suckers
Rollin twenty-third, sellin dope to cluckers
Your bank is thick, but you got no game
Spittin at freaks runnin Superfly slang
I’m comin up the ave, hard as hell
In a drop-top ‘Vette with a greenwood tail
Girls are jockin, lookin for a knockin
Smart investments keep me clockin
You know a ‘Vette only got two seats
Just enough room for a player and a freak
Rollin at the park and I seen this cutey
L.A. face with the Oakland booty”

The only downside of “Seminar” is that the final third of the album is a mixed bag. Mix is still spitting nicely on “I’ll Roll You Up,” but the beat is a bit underwhelming. “Something About My Benzo” is alright, but in the end it comes across as a parody of Schoolly D’s “Gucci” style and flow. “My Bad Side” does close things out strongly though, with an intense machine gun bass and the appropriate samples from “Scarface” and Public Enemy to match:

“Drop the ‘Square Dance,’ punk I ain’t bullshittin
Tell ya girl about how hard this shit’s gettin!
Shoot ’em down like the old world crime boss
Break soft and like a salad you’ll get tossed!
Voice like rock effects I don’t need ’em
You drop for your boss, I’m like a pimp when I greet ’em!
Role like son, your just another recruit
Salute rooty-poots to your king, I’m in the black boots!
The beat’s runnin like a Benz in the fast lane
Boom the tune, put your speakers in a freeze frame!
Watch the bunny while I inject the venom
Screams of pain cause my rhymes up in ’em!”

At only ten tracks and 44 minutes long, this album may seem short by today’s standards. As a follow-up to his gold selling national debut though, “Seminar” was not only effective but raised the bar on his standards lyrically and musically. Few could have predicted his iconic status to come in a few years, but back in 1989 this album was well beloved by his peers and garnered him acclaim far outside of Seattle. Yes, even as far as the midwest, where I put this tape on blast while driving around in MY hooptie. It still sounds as good now as it did then, and for those who were looking for a rapper part Too $hort, part KRS-One and part Parrish Smith all rolled into one, Mix definitely fit the bill. It’s a classic rap album not to be missed.