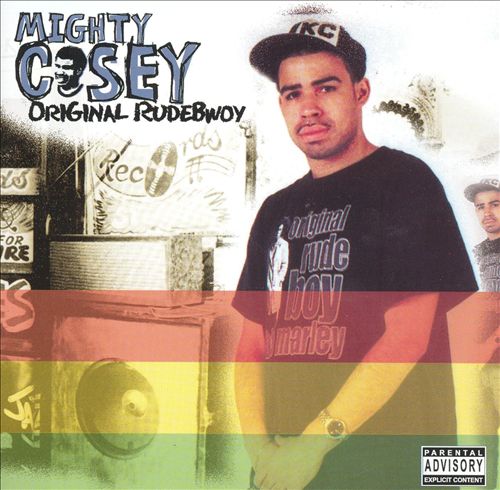 Time for a confession: Part of me always wanted to rap. Not necessarily be Jay-Z (as if), but be involved in lyrics or beats in some way. It’s obvious that a guy that loves hip-hop and loves writing would be drawn to this rap shit. Now I could only see myself as a producer, being the sample hound that I am, but back in high school my friends and I would bullshit, beatbox and make up stupid (and I mean stupid) rhymes.

Um, I swear I went to school with Mighty Casey, which is the biggest dis as well as the biggest complement I could ever give him. He is corny and silly, and probably will be doing something else with his life in two years â€“ if not already. However, his LP is one of the few laugh-out-loud hilarious albums I’ve listened to all year. And he has something that not many other MCs can claim: Fun.

The apex of the 9-track album has to be “White Girls,” a Black man’s ode to white women that literally had me crying with laughter. He flips “White Lines” something lovely, but I can’t imagine Melle Mel approving:

It’s more foul than pork, but like Eminem and Fatlip, Casey seems painfully aware of his fucked-up view â€“ and how funny it is. Other tracks, which you can infer the subject by their titles, are “Liquorland,” “Black Rapping School,” and â€“ ahem â€“ “Liquorland 2.” Did I mention there are only 9 tracks?

Unfortunately, his lyrical skills and beats (done by Casey and DJ Laye) aren’t on par with his wit, making the album altogether a weak experience. The one exception is the insanely-tight album opener, “Original Rudebwoy,” which sounds â€“ literally â€“ like Premier. How did this happen? I don’t know, but Casey better go back and get into that zone. For now, though, what you’ll get is an alright LP good for a spin or two. Maybe it’s better to wait until he, like Eminem, finds his Dr. Dre. Does Wendy Day produce?