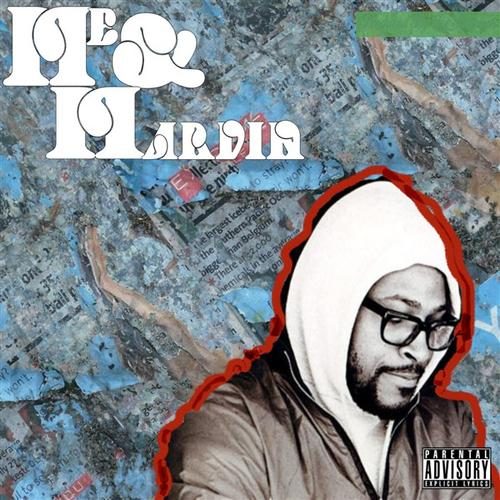 Perhaps the name made me think of Bruce Banner. Perhaps the title made me wonder if “Marvin” referred to Marvin Gaye. For whatever reason, this EP sat untouched for a month until I was going through unreviewed joints, and something in me said “give this one a try.” I was pleasantly surprised to find out the latter of my first two thoughts was true, but more on that in a second.

First let’s give you a little background on Lee Bannon. From looking around the world wide tangle of misinformation and 404 dead-ends, I was able to determine a few factual items about this mystery rapper. Fact #1 – Lee Bannon hails from Sacramento, California. You wouldn’t necessarily be able to determine it from listening to Lee Bannon, especially since he’s rolling with a lot of East coast cats like Big Shug, Skyzoo and Termanology on this EP. Fact #2 – Bannon’s mainly known as a producer, and can be heard creating the backdrops for the aforementioned MC’s as well as the likes of Trife Diesel and Talib Kweli. Fact #3 – Bannon conceived “Me & Marvin” as a tribute to the 25th anniversary of the untimately passing of the beloved soul singer. Last but not least as a tribute album Bannon intends this entire EP to be given away for FREE, so grab the download from any of the links in this review to check it out for yourself.

Now to be honest, I’m not sure that I’m even hearing Bannon step out into the spotlight here – well as a rapper at least. Every single track other than one features at least one if not two to three guest artists, and that other track is simply a 21 second interlude called “The Phase” which is simply a snippet a famous Marvin Gaye interview where he said “I write music according to my lifestyle.” In other words, when Marvin was sad he wrote sad songs, when he was happy he wrote happy songs, and when he was feeling sexy he wrote sexy songs. Marvin lived in touch with his emotions, and it seems that Lee Bannon employed the same technique in crafting the tracks for the “Me & Marvin EP.” Each song reflects a different mood. “Dark Light” featuring Kali and The Jacka is a brooding tale of California gangsterism, boasting “keep your chain tucked or get your chain took.” On the other hand “A New Song” featuring Reks and Torae among others is very warm and uplifting, offering hope by when Reks quips “the real is back at long last.” Picking out the Marvin Gaye samples is as much fun as listening to the EP itself, although “Shadows” featuring C Plus and Uptown Swuite may be the best of them all.

“From the buildings where they sell drugs
To make a living we imprisoned by our own thoughts
Or making millions in the Slumdog Village where the killers grip the toast
I roll the L, tap it twice, then I pass it to a ghost”

Lee Bannon’s definitely onto something here, although it’s likely that the OTHER reason this EP is being offered free is because the licensing and the sampling fees would be much too substantial to overcome. Even as a tribute album they wouldn’t clear it without charging big dollars. That’s perhaps the most telling thing of all given Marvin Gaye’s career was one of the most lucrative and self-destructive in modern day music, ending tragically with his own father shooting him with the gun he had given him four months earlier during a business dispute. Ohh mercy mercy me. Music fans all around the world really wanted to know “What’s Going On?” in 1984, but there were no good answers to be had. 25 years later we’re all still asking, but Lee Bannon simply wants us to remember and appreciate his greatness in a hip-hop context. That’s not hard to do at all, but Bannon has done it well.