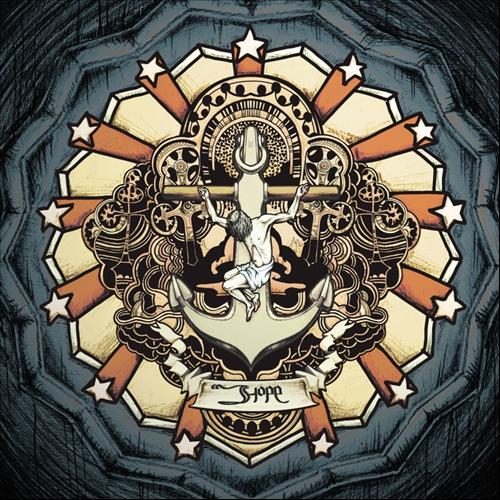 Non-Prophets. Two people. One rapper, one producer. Sage Francis, Joe Beats. Two names. One arguably more widely known than the other. But that doesn’t change the damn fact that this is a Non-Prophets album. You’re not gonna call a Pete Rock & CL Smooth album a Pete Rock album, are you? Unfortunately, some people are. You probably won’t catch them saying it, but that’s what they are calling it under their stinking breath. They can get a smack for that.

Please excuse the seemingly erratic start of this review, but I’m just fresh off listening to “Hope” for the fifth time and visiting the group’s website for some background information. What I was left with was the sense of duty to report that the Non-Prophets aren’t just Sage Francis and some dude who makes beats. They’re both natives of Providence, Rhode Island, they’ve been making music before Sage Francis became a hot commodity in the indie music press, and they apparently share my passion for past eras of hip-hop. They surely will recognize the phrase ‘They can get a smack for that.’ But some of my readers and some of their fans might not.

It is a disparity that drops us smack dab into the dilemma of contemporary hip-hop, commercial and otherwise. Its expansion causes hip-hop to spread itself continuously thinner, making it increasingly difficult to uphold a steady core. One side is in danger of getting absorbed into the pop world, catering to a mindless consumer majority, the other is running the risk of becoming a self-righteous, narrow-minded anti-pop machine. Seeing as how “Hope” is brimming with soundbites from hip-hop history (sampled and verbally quoted), it would be easy to assume that the Non-Prophets are giving in to nostalgia, rationalizing their behavior, like Jurassic 5’s Chali 2na put it, as “paying homage as well as returning favors.” What then about the numerous mainstream MC’s who intersperse their lyrics with old time phrases as well? You surely wouldn’t call their references a blatant bite just because they sell more records? It is therefore evident that today we have very disparate segments of the hip-hop population reminiscing about their common roots. Ideologically, however, they couldn’t be further away.

The mind-boggling irony is that if you imagined P. Diddy and the Non-Prophets ending up on the same dancefloor by some freak accident, a wise DJ might be able to get them to dance to the same music – the music that everybody into hip-hop listened to 10, 15 years ago. But it’s doubtful that they would have much to discuss if another freak accident would cause them to meet up at the bar or washing hands in the bathroom. And I’m not talking about bodyguards or paparazzi interfering, I’m talking about fundamental philosophical differences getting into their way. Because even when they reference old jams, they manage to adopt them for their very own purposes. Puffy used BDP’s “Jimmy” to hammer his name change into people’s heads on “Diddy”, Sage Francis re-interprets Nine’s “Whutcha Want”, but instead of “fat beats for my rides” and “mad clips for my nines”, he wishes to “drop science in my rhymes” and “kick knowledge all the time”, which itself is a reference to an even earlier era in hip-hop than Nine’s.

Confusing, I know. But not as confusing as it may seem. One could interpret Sage’s playful reminiscing as a sophisticated deconstruction of his own biography and career, and certainly sentences such as the concluding “Whutcha Want”-line, “and my name up in lights, S-a-g-e,” are served with a pinch of irony, but other passages make it clear that the man is quite serious about this paying homage stuff, even when he modifies a famous Beastie Boys line to fit his straight-edge philosophy: “I’m a writer, a poet, a genius, I know it / I don’t buy cheeba or MoÃ«t.” “We have to keep Slick rulin’!” he exlaims, outing himself as “a devoted fan of Sam Sever,” and there’s something about him and “Hope” that leads you to believe that he really means it, regardless of his reputation to go over people’s heads and the increasing obscurity of such a reference. You know that he digs “ill MC’s / who like ‘like’, confusing metaphors for similes.” And his partner behind the boards is right there with him, dropping references of his own (“a hype producer with my loops, watch me get loose”).

I wouldn’t go so far as to say that “Hope” reinstates an early ’90s New York sound. For that, Joe’s beats are too much in the line of standard post-’96 underground hip-hop, whose heart may still beat for that good ol’ boom bap sound, but who really uses different sources and techniques. But the rawness and the playfulness are definitely there. This holds true for pretty much every aspect of the album, whether it’s Sage’s very physical flow, his knack for wordplay or the deeply resonating drums. A lot of “Hope”‘s success is owed to the well kept balance between beats and rhymes and their equality. “Any Port” and “That Ain’t Right” harmonize particularly well, sticking to a true and tried script – percussive during the verses, melodical during the chorus. The highly musical but still booming and bustling “Damage”, or “Tolerance Level” with its broad sampling spectrum are exemplary of the excellence the underground has achieved by now, while “FRESH” and “Xaul Zan’s Heart” are sufficiently humorous.

The concept may be new to some, but there’s a certain course of action in rap called ‘getting retarted’ or ‘getting stupid.’ Most rappers have forgotten about it, a chosen few keep it alive (obvious mention: Redman and Method Man, not so obvious mention: Nelly and the St. Lunatics). It’s a proceedure that demands you to loosen up a bit, to allow your inner rhyme animal to run wild. You might not always come up with the most insightful things to say when you get retarted, but you are fulfilling one of hip-hop’s primal needs – have fun with it. That’s what’s happening here. Check “Damage” featuring (apart from the hopefully obvious nod to LL Cool J) a great lyrical marriage of Ice-T and a lovely young Hollywood actress (“I am a, nightmare walkin’, psychopath stalkin’ Natalie Portman with a blank tape in my walkman”), or “FRESH”, which hosts most of the quotes mentioned above.

From a songwriting point of view, the ones that stick out include the cool (but cryptic) “Spaceman”, set to a mellow groove that makes our hero realize: “Hey Phife, gravity don’t float” (another one of those damn references), his proclamation of a “New Word Order”, or “Xaul Zan’s Heart”, where Sage lets free a particularly nasty alter ego who bids his goodbye with the line “I am womanizer, hear me, whore.” Chances are, if you know Kool G Rap’s “Talk Like Sex” (and understand its concept), you will be more receptive of rhymes like these:

“I will remove the cross that dangles in the cleavage
of every Christian chick who thinks her tits are savin’ Jesus
Gee whiz! Listen to the knowledge that I’m kickin’
I’m not hard on women, I put my hard-on on women
I’m stuntin’ with Robin Givens who shouts with her face down
When I’m not swingin’, I’m scoutin’ out the playgrounds”

Surprised to hear a moving love song like “The Cure” after something like this? Fail to see how one can go from “Thinkin’ this plug dick can kill the dead silence in your body / I wanna be the life of the search party” to “When a boy writes off the world, it’s done with sloppy misspelled words, if / a girl writes off the world it’s done in cursive?” Well, let me introduce you to the multi-task MC. Not all of the loose strings may end up getting tied together, lyrically there are a couple of awkward moments (“Shit is hot – plumbers unclog my toilet wearing oven mitts”), some clichÃ© moments (“I blame my hate mail on typographical errors / correct the mispellings and then send out thank you notes for the love letters”).

But for me, who for some reason was expecting to meet a bitter seen-it-all cynic, “Hope” was a surprise as well, and a pleasant one at that. Somehow, the mood is right on this one. There’s none of the vulnerability that other rappers sometimes associated with Sage Francis (Anticon) purposely parade around. “Hope” is balanced out. It’s an interesting, listenable record that doesn’t require seminars to understand. Often, you’ll find Sage Francis being willingly simplistic, living up to his sarcastic mantra “I’m your typical hip-hop political figure / but I’m not left wing or right wing, I’m the middle finger”:

“Don’t you see how fuckin’ beautiful life is?
How dare you waste it stuck in a cubicle with tight lips?
Stand up, push out your chair, jump on your desk
And if you got a crush on your co-worker, touch her breasts
and if you hate your boss cause he’s a sucker, punch his chest
Push his wig back with pimp slaps, crush his kegs
kick a hole in his computer, pull the plug and then jet”

Word to Rakim. Last but not least, Sage Francis offers insightful commentary on hip-hop. While he shows a (sane, not maniacal) adversity against commercial rap music I personally can’t subscribe to, he makes his position known, pointing out “candy rappers reproducing Tupac covers, Biggie small wonders” and the lesser-known fact that “Das EFX rocked that band-aid 10 years before Nelly did” (don’t remember that one) in “Mainstream 307”, arguing that “the lowest common denominators let the art suffer / the only heart you follow is roadkill on your car bumper.” Even though it contains a nice take on OC’s classic “Time’s Up”, the real genius of “Mainstream 307” lies in the re-interpretation of a quote off the first Mobb Deep album, using Prodigy’s “I wasn’t down with the mainstream, or should I say their team” to great effect. Likewise, “Tolerance Level” is inspired by a part in De La Soul’s “Peas Porridge”.

In “That Ain’t Right”, he also turns to his own clientele, telling them to “stop acting like assholes / it ain’t about backpackers or cash flow / […] / and it ain’t about these fuckin’ loudmouths shoutin’, “BATTLE!” To rookies who “think hip-hop died” he replies: “It was here before you were, it’ll be here in the future.” Ultimately, every serious hip-hop fan has some growing up to do. In regards to his own experience, Sage Francis would certainly agree: “Didn’t know it at the time that the shit made me look stupid / rockin’ pro-black rhymes over “The Devil Made Me Do It” / I never gave two shits ’bout rockin’ new kicks / I ain’t the type to wear somethin’ just cause the shoe fits.”

These summarizations so far should have made it clear that “Hope” is a hip-hop album from a hip-hop group. If you are expecting some other incarnation of Sage Francis, the slam poet, the author of “Makeshift Patriot”, you will certainly find traces of the various aspects of his artistic being, but on this record, they’re all encapsuled in hip-hop form. For a purely technical, childish celebration of hip-hop’s past, you will have to check Edan. For unadulterated ego trippin’ fun, a classic hip-hop rebel attitude, personalized poetics and b-boy rhyme and riddles, “Hope” is a viable candidate.