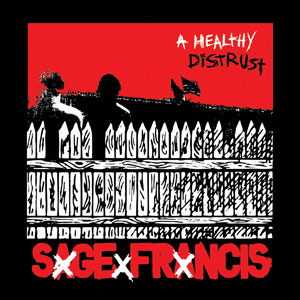 Defining Sage Francis as an artist is nearly impossible. No one can be completely described within the confines of the written word, but when discussing Sage, the best word to allow the uninitiated to understand is “listen.” He is equal parts battle-rapper, political voice, spoken word artist, and just about everything else, including his masochistic alter-ego Xaul Zan, and the only way to even begin to comprehend this man is to simply listen.

While many rap artists gravitate toward the mainstream, Sage Francis has done the opposite. Aside from a relatively straightforward last record with Joe Beats as the Non-Prophets, his sound has evolved further and further away from most of the other music that is available. All of his “Sick” mixtapes played as subversive twists on the typical unofficial release, and his first official album, “Personal Journals,” was an intensely intimate look into his life, complete with an eclectic variety of sounds to complement his musings.

Sage Francis’ new release, “A Healthy Distrust,” is the most difficult material he has ever released. The collection of music on the album is a remarkable achievement, not because of its quality or beauty, but because of the extremely random patterns of metal sounds, slow guitars, and soft samples that populate the record, sometimes on the same track. This is partially attributed to the variety of producers, from Sixtoo and Alias to Reanimator and even Dangermouse. Two-thirds of the way through, the calm “Crumble” morphs from a relaxing track to an explosion of Bomb Squad noise under the guidance of Sixtoo. The following track, “Ground Control,” boasts futuristic blips and resoundingly heavy drums, again by Sixtoo. From song to song, the musical offerings are very diverse, and regardless of effectiveness, are complex enough to merit attention. There is a distinct lack of harmony amongst the loudness, but many of the songs reach a happy medium, as the producers manage to create engaging music without being abrasive.

Sage Francis has always been a great lyricist, and this album is no different. From the opening moments, he displays the distrust that the title speaks of. Lyrically, he has perfect breath control and vocabulary, and his writing borders on brilliant. If nothing else, in each song there is enough going on to keep even the most scrutinizing listener happy. The first track, “The Buzz Kill,” provides ample evidence of this:

“Radio… suckers never play this
They’re scared shitless of dismissing Clear Channel playlists
Poorly developed yet highly advanced
Black music intertwined with a white man’s line dance
[…]
It’s not lonely on top I’m kept busy with shivers and cold shakes
Sitting on snow banks, waiting to be delivered some soul mates
So I weight lift and test my faith on several levels
Build my body until they send me an empty face with a head of devils”

The perplexing and beautiful “Sea Lion” follows, and Sage’s catchy rhyming carries one of the softer offerings on the album. The production mostly consists of a guitar and drums, and his singing on the hook is surprisingly effective. Arguably the best song on the record, “Gunz Yo,” trails “Sea Lion” on the tracklisting. Sage Francis absolutely rips an amusing mockery of the power associated with firearms, and Dangermouse provides an understated, effective beat. Sage is brilliant:

“I’ve got a water gun, I keep it in my mouth
It keeps me safe from the things I like to speak about
But words are leaking out and all the smiles that I crack
Are like a dam on the verge of collapse
Ain’t no turning back, in fact, I can’t hold down my fluids
I can’t retract statements without water displacement
Flooded the basement, then sought refuge
Removed my waterproof vest and then I kicked off my wet shoes
Made it to dry land, pistol in hand
Fistfuls of ammo, riding on a camel through the desert sand”

Sage stays true to his occasionally abstract self, and there is plenty of interesting stuff to decipher. “Sun Vs Moon” has Mr. Francis imagining if our source of natural light battled the moon on stage. Aside from being a wonderfully realized concept, its incorporation of traditional hip-hop themes into such a bizarre scenario is refreshing. “Slow Down Ghandi” is an encompassing political song with plenty of fabulous one-liners, like “when push turns to shove you jump into your forefather’s arms” and “Republicrat, Democran, one party system.” In fact, “Slow Down Ghandi” is the epitome of what “A Healthy Distrust” represents. Sage is trying to make people actually think, instead of letting those in charge do it for them. There is a spoken word ode to Johnny Cash, and a twisted love song “Agony in Her Body,” but most of the time he spends questioning anything and everything he can.

There are very few musical missteps, the most obvious being “Dance Monkey,” a lyrically adept meditation on popular music with Sage Francis’ usual dissident messages. The coarse production and chanted chorus are a bit much, unfortunately, although it seems that Sage intended the song to reflect the exact opposite of what is normally heard on the radio. His wit shines through the most at the end of this song, when he hauntingly asks “when the bomb hits… whose music will you look to for shelter?” before hastily adding “not that mine will help ya.” The point is, no matter how difficult the track sounds, Sage is a constant throughout, coming from every angle with his vicious rhymes. There are no guests at all, so the consumer is getting fifteen songs of one of hip-hop’s most powerful minds. There are few moments in which you will be able to take a breath and relax, but this is the goal. Within the same song, he will make you smile a few times, and gasp several more. He is simultaneously introspective and outwardly challenging, and when he states “I’m a poor man’s version of a rich man,” he is telling you something about himself as well as making you think long and hard about what he means.

Sage Francis is obviously not for everyone. Though he is a gifted lyricist, he is hard to follow, and the entirety of “A Healthy Distrust” has a rough edge that makes it far from easy listening. If you are even close to as jaded as Sage is regarding the government, religion, and pretty much everything else, you will love this record. If you aren’t, you should listen to this record a couple of times to better yourself. He is one of the most important rappers out today, no matter how many units he moves. “Personal Journals” gave us his private musings, and now he is thrusting his opinion angrily towards us. He has never disappointed, and “A Healthy Distrust” is no different.