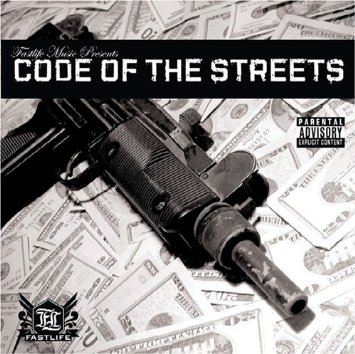 Various Artists :: Code of the Streets

“It doesn’t matter if the cops be scopin
They can’t do jack, that’s why a young brother’s open
To do anything, anywhere, anyplace
Buckwild in another court case
It’s the code of the streets” -> Guru

“Code of the Streets” is a very evocative title for many hip-hop fans. The song itself was a watershed moment for underground legends GangStarr, as it not only received some crossover play but marked the first time Guru proved he was just as worthy on production as cohort DJ Premier. If you’re going to call a compilation “Code of the Streets,” even over a decade after the song of the same name was originally released, you’d better be prepared to come correct.

It should come as little surprise then that “Code of the Streets” is a largely focused on the East coast rap scene GangStarr hails from (New York by way of Beantown) or that the list of contributors reads like a who’s who thereof. AZ, Big Noyd, Capone, Cormega, Ghostface, Mobb Deep, M.O.P., Nas, Nature and Prodigy among others can be found here. To the credit of Fast Life Music, the songs from these artists are some high octane shit. Sizzla provides some Jamaican patois flair on the heavy “System” featuring Mobb and Noyd. Capone’s “Oh No” bangs out dark pianoes and brutal raps, proving that he continues to be underrated even though Noreaga’s charisma often steals the spotlight. Both of these joints are laced up by Ill Will Fulton, but he doesn’t dominate the entire album. Alchemist is deftly understated on Lake & Nas’ “One Never Knows” as well as Noyd & Prodigy’s “Louder,” Nottz goes old school T La Rock with boom bap on his self-produced “It’s Yours” remake, and even DJ Premier gets in the mix on Blaq Poet’s “2 to the Stomach”:

“Oh my God! Y’all niggaz didn’t want none of me
Primo, you shoulda let me chill, leave me be
But now I gotta attack, pull out my rap stacks
Show all these bitch-ass niggaz they can get backslapped
Queensbridge, that’s my motherfuckin kingdom
Poet’s my name son, and that’s where I came from
I been a motherfuckin terror, ever since day one
I was loadin glocks, niggaz was playin with play guns”

The truest gem of the album may be AZ’s “Live Wire” though. Besides benefitting from an Alchemist production, AZ the Visualiza continues to showcase why he’s among the greats of rap who never get hailed for their greatness. In basketball terms, he’s the Clyde Drexler of hip-hop:

“Style sicker, been quenched through the Nile river
Now verbally versatile when I deliver nigga
It’s nothin – I’m hip-hop all day
Used to hustle in the hood, heavy knock off treys
Had to scuffle for my blue Gazelles, top door stage
How y’all niggaz gon’ fuck with the A?
This is that – thunderfire, mossberg, AR shit
Pearl-handled black leather glove, rubber grip
Crowbar, gym star on some other shit
My niggaz love to flip, never on that sucker shit”

Increasingly the East coast has been showing love to the West and Dirty South, and “Code of the Streets” continues that trend with a few fine songs that don’t feel the least bit out of place among the East’s heavyweights. T.I. gets down with Juelz Santana and Cam’Ron on the crunk “Royalty.” The Game pops in with “Compton Compton.” Best of them all though is the Clinton Sparks produced “Underground Legend” featuring Lil’ Flip. He may have gotten over with “Game Over” but over in the Texas rap scene he’s been an underground king like Bun-B and Pimp C for years, and he reps hard here:

“Yeah, you know me I’m the Underground Legend
But I Rap-A-Lot like Scarface and Devin
I’m from Houston, you know how we got down
I got a bitch that’ll rob you when you hit town
I got vatos, and they shot O’s
Try to jack me they run up with glock fo’s
Muh’fuckers wanna talk all tough
When I see ’em at they shows they don’t wanna get rough
A lot of niggaz wanna be like ‘Pac
until they ass get shot nigga, now who on top nigga?
A lot of niggaz wanna be like B.I.G.
But when I look at they BS, they shit aint’ big”

Although many of today’s more publicized compilations and soundtracks turn out to be little more than B-sides, cannon fodder, and uninteresting tunes “Code of the Streets” proves to be a pleasant exception to the rule. Truly a well-rounded compilation one can enjoy in the ride or on headphones with very little material to skip over, “Code of the Streets” lives up to it’s auspicious title and does GangStarr proud – it’s only a shame they aren’t featured on it.