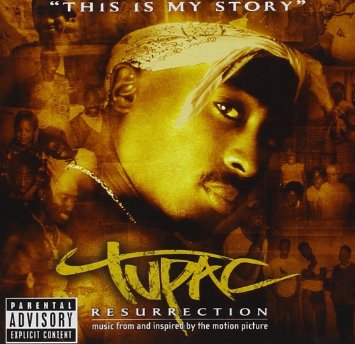 The hardest part about reviewing this album was not listening to it, but classifying it. Do you call this a 2Pac album? A Tupac Shakur album? A movie soundtrack? It’s actually a little of each. Since the album’s cover declares it to be “music from and inspired by the motion picture,” that was the direction this writer chose to go. Soundtracks are certainly not a new forte for the legendary rapper. In his lifetime, Shakur made contributions to “Above the Rim,” “Gang Related,” “Gridlock’d” and “The Show” among others. It’s appropriate, albiet somewhat ironic, that he is also the star and chief contributor to a posthumous soundtrack for a movie about his life and times.

Given there is some new and unheard material on this album, “Tupac Resurrection” may at times feel like Shakur’s come back from the beyond to the rap world. In truth though, Shakur will never die. His rampant paranoia about his own death made him one of the most prolific rappers while alive, and even if/when the vaults of material start to run dryremix albums will be released year after year. It goes much deeper than whether Shakur’s voice is heard on your headphones though. Tupac Shakur is alive in hip-hop with every rapper he influenced, who intentionally or otherwise copies his style and spits his trademark phrases. It’s even become fashionable to accuse rap artists of being a “wannabe Tupac” if they have a bald head and a bandana, or if they talk about “thug living” in their music. Sometimes these accusations have the air of truth, but would be damn hard to find any rapper who was older than 9 from 1990 on who wouldn’t consider Shakur an influence and/or an inspiration.

The original songs on the album start with “Ghost,” a song originally produced by DJ Pooh but revisited by Eminem. This is all too typical with Shakur tracks these days – the labels that release them don’t trust his fans enough to appreciate his rhymes unless the beats have been remade for modern times. I don’t disrespect Marshall Mathers for his track though, it’s a slow and methodically pounding melody that fits Shakur’s rhymes like a glove, but I’d still like to hear it the way DJ Pooh intended and decide for myself which version is better. Eminem takes a far more direct role on his revision of the Outlawz song “One Day at a Time,” adding a verse of his own to the song. “Runnin’ (Dying to Live)” is a partially new, partially revisited track. The Notorious B.I.G. verse on the song is from the song “Runnin'” from the One Million Strong compilation, one of several known songs Biggie and ‘Pac appeared on together before their feud escalated. Eminem’s version features a new beat and new Shakur lyrics, and can be considered a worthy “alternate take” on the original “Runnin'” concept.

Other songs on the album represent some Shakur’s greatest material while alive and recording as 2Pac. Why “Holler if Ya’ Hear Me” and “Bury Me a G” weren’t included on his so-called “Greatest Hits” album is a mystery, but may have something to do with being unable to license the songs from his Jive Records days before he joined Interscope’s roster. Unlocking the keys to his past makes this album more comprehensive than other Tupac retrospectives to date, as “Resurrection” even manages to include Digital Underground’s “Same Song.” As a Digital Underground fan I went out of my way to buy their affiliated albums, and it was because of Shock G’s introduction “Tupac – go ‘head and rock this” that I went on to eventually purchase the “2Pacalypse Now” cassette which marked the start of his rap career. Ironic how such a small moment in hip-hop could start such a big movement. It was not his earliest recorded moment though – obscure songs like “Panther Power” came first, and though “The Lost Tapes” covered some of this material they may be a new revelation to the listeners of this disc.

This album closes nicely with a diversity of Shakur material – the smoothed out Thug Life song “Str8 Ballin'”, the classic “2Pacalypse Now” song “Rebel of the Underground,” and the heavily bootlegged mixtape song “The Realist Killaz” that puts 50 Cent on a track with the all-time great for possibly the first and last time (unless Shady/Aftermath licenses some more of Shakur’s material). It’s surprising how natural they sound sharing the same beat, but it’s worthwhile to note this track seems specifically to have been designed as a way to take potshots at a certain “wannabe Tupac” rapper. It’s fairly obvious who is being referred to, but discussing it would take away from the focus of “Tupac Resurrection.” This is a curious and pleasant mixture of new material, revised old material, rarely heard early material from Shakur. While the Death Row days have been almost entirely overlooked save for “Starin’ Through my Rear View” from the “Gang Related” soundtrack, this is not not so bad considering that era is already so well covered. A dedicated ‘Pac fan will probably have 71.6% of this album already, but it’s not just worthwhile for the other 28.4 – it’s a reminder of the decade long mark Shakur has made on the rap world before and since his death. “Resurrection” may bring back some forgotten material, but it hardly needs to raise Tupac himself from the grave – it feels like he never left at all.