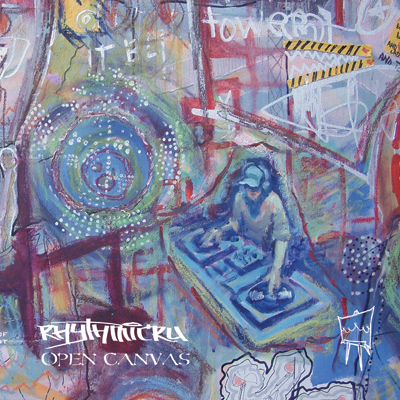 After this request from a pedestrian in the album’s intro, Rhythmicru (pronounced exactly how it’s spelled, “rhythmic crew”) gets to work with their second album, “Open Canvas.” The Toronto-based, seven-member collective’s 2002 debut, “RhythmicWho?,” sold out its initial run of 1,000 copies, so several members of the group started After Midnight Records as a legitimate business venture to serve as a vehicle for the group’s work. “Open Canvas” is the label’s first official release, and it should just as successful as the group’s first effort. Rhythmicru starts the album off right with “Tilted,” featuring J. Breakwood. Over smooth guitar licks, head-nodding bass and turntablist scratching from in-house producer D-Ray the Kid, the group shows that they have formidable skills on the mic:

Quotables like this are all over the album. A refreshing break from the materialism and misogyny saturating the rap industry, the rhymes spit by these MCs have substance. Whether it’s the staggering imagery on “Dreamin” or the hopes of better days on “The Renaisance Will Happen,” this group’s lyrics are incredibly consistent throughout the disc. Rhythmicru still knows how to have fun though. Group members TheSnowyOwl and D-Ray spit their own freestyles on “Vibin”and “Gimme 5 Minutes,” respectively, and D-Ray and Batho trade lines over slinky, mesmerizing strings on “High Tonight.” Still, Rhythmicru is best when conveying messages on their personal views. Group member Cale Sampson does this on the album’s two best tracks, “Facts of War (Part One)” and “Distractions.” The former is a compelling editorialâ€”complete with statistical and historical evidenceâ€”on his disagreement with the United States’ situation with Iraq. On “Distractions,” Sampson talks about his disappointment with the current state of the music industry, and the world in general:

“Ever since Eminem made that 8 Mile film
everyone thinks rappin is an option for them
so any kid now who can put a sentence together
calls himself an MC, ‘cuz he connected some letters
the U.S. got everyone except for Bin Laden
bombing the Taliban, while attempting to catch him
that’s why you always see his face on the news, son
look, we got 150 channels to choose from”

“Open Canvas” isn’t slacking on beats either, with all of the tracks being handled by members of the group (which is also refreshing, in an industry where an album needs hits from “A-List” producers to get a buzz). The Nas samples utilized by D-Ray the Kid on “Inner City Maddness” are on point, and the laid-back horns employed by Craig Harper on “Crazy As A Loon” are reminiscent of an old-school jazz club. Despite clocking in at a low 47 minutes, this album is one of the hottest independent releases of the year. This crew isn’t only rhythmic; with their sophomore effort, they’ve provided an “Open Canvas” to display all their talents.