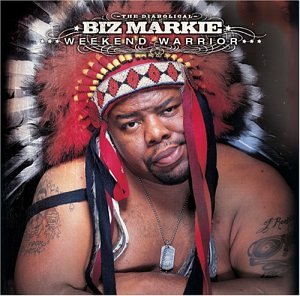 With a style that made Cold Chillin’ records millions and a face that made just as many dermatologists millionaires too, Biz Markie became a star of the rap community. He’s certainly recognizeable at any hip-hop function whether DJ’ing on the turntables, rapping on the microphone, or showing off the beatbox skills best remembered from “Make the Music With Your Mouth, Biz.” In truth Biz could be said to be a renaissance man – skilled in enough of the different hip-hop arts to be internationally known as an icon of the culture. The fates have not necessarily been kind to this legend though. Beloved by pop and rap fans alike, he’s still suffered from a ten year drought between new full length albums. The biz treated him like a pariah after Gilbert (fucking) O’Sullivan sued him for an uncleared sample on 1991’s “I Need a Haircut” album, and he lost the case in federal court. His response album “All Samples Cleared” fell on deaf ears, and with his recording career over Biz settled into a life of turntablism and cameo appearances on TV and in film.

Actually, Biz never really dropped out of rapping, although it may have seemed that way to the mainstream. Every few years, another twelve inch single would quietly work it’s way on the scene from the underground – “Studda Step” in the mid-1990’s, “Turn Tha Party Out” in 2001, and so on. And just as quietly and unannounced, Biz Markie’s “Weekend Warrior” hit store shelves on November 18, 2003. The first new full-length album from a rap legend in a decade should have been cause for a major publicity blitz, but none was forthcoming. Looking at this disc though one can suspect the cause is Tommy Boy, a once pioneering hip-hop label known more in recent years for dumping it’s entire rap roster and for squeezing blood out of pennies by endlessly reissuing their classics songs on vinyl, CD, digitally enhanced CD, and so on.

It’s shameful that Tommy Boy couldn’t be bothered to promote Biz Markie’s new album, especially considering the hit potential to be found within. The first single “Let Me See U Bounce” has the right crossover elements – a bumping Jamaican riddim and guest vocals by reggae flavor of the minute Elephant Man. If that won’t do, how about “Do Your Thang” featuring P. Diddy? If putting rap’s resident Bad Boy isn’t enough, the song gets doubly over thanks to it’s old school tributes to Busy Bee, “Double Trouble” and “Down by Law” among other things. Best of all, it doesn’t get any more classic than the song “Friends.” Yes, like “Just a Friend” before it, the chorus features some off-key Biz warbling, but it’s the smoothed out beat and friendly rap flow that really take you back. It’s a perfect fit like shell-toed Adidas:

“I saw this girl from like around the way
I told her I was the B-I-Z-emma-zah-A
She said she know my rep-etation, know I got clout
And like to get to know me, without no doubt
So we started havin long telephone conversations
Tryin to feel each other out, showin a lot of patience
To the hook-up from my man, word bond she was bad
If I met her whole family I would kiss her dad
So in my mind, I was thinkin she really likes me
She got a good head on her shoulder and she’s no dummy
Me and her had compatible horoscopes
But she bugged me out so bad, I was on the ropes
Now when I was with her, my shoulders shrugged
Beause when I reached out for a kiss and hug
She mushed me in my face, and smiled with a grin
And said, dis, question… WHY CAN’T WE BE FRIENDS?”

That’s a Biz classic in a nutshell, the underdog nice guy trying to get with a fly girl, yet always coming up short. In fact there’s little doubt the song “Turn Back the Hands of Time” describes Biz Markie’s new album well. In his own words, the album will take you “back when Ra was still with Eric B.” and when “Kock was the mayor and Reagan was the Pres.” When Biz first started out in rap, his label Cold Chillin’ reflected the diaspora of East coast rap nicely: Kool G. Rap with the hardcore street rhymes, the by turns suave and dangerous flows of Big Daddy Kane, feminine attitude with Roxanne Shante, and the beats of Marley Marl among others. Along the way from the golden era to the 90’s though the friendly party rapper got unfairly attacked from both sides – afrocentrics who felt they weren’t helping the cause, and gangster rappers who saw them as being too soft for rap’s new attitude. Even without Biz Markie’s sampling woes, his career would have suffered anyway competing with the new generation of tough rap, from Das EFX to Redman to Paris to Ice Cube. Biz never abandoned his trademark party friendly style throughout it all, which is now both a blessing and a curse. Biz does sound out of step with today’s rap scene. Beats can help him here, and some tracks do – the rock sounds of “For the DJ’z” and the Osinachi & Soulchild “Not a Freak” featuring Erick Sermon (and sounding like one of his beats) get the job done. Undeniably though, this album is the sound and style of the late 1980’s and early 90’s, and unapologetically so. That’s why if you’re a long time fan of the B-I-Z, you can’t help but love tracks like “Tear Shit Up” featuring Jazzy Jeff on the wheels of steel.

While “Weekend Warrior” won’t upstage any of the original Cold Chillin’ albums that made Biz Markie a fan favorite and hero of hip-hop, it’s far from a whack performance either. There’s no reason to believe that with the right music video package and a solid push behind him, especially in these days of nostalgia for everything from the 8-bit Nintendo to throwback jerseys, Biz wouldn’t score another smash hit worldwide. Unfortunately he’s not likely to go far, unless by fluke “Chinese Food” gets included on the soundtrack to the newest Jackie Chan action/comedy film. Biz needs more love than Tommy Boy can give him (or is even willing to) and suffers as a result. “Weekend Warrior” doesn’t have to be saved for Saturday and Sunday – you can play it any day of the week for some classic style that will take you back to Troop jackets and Kangol hats.