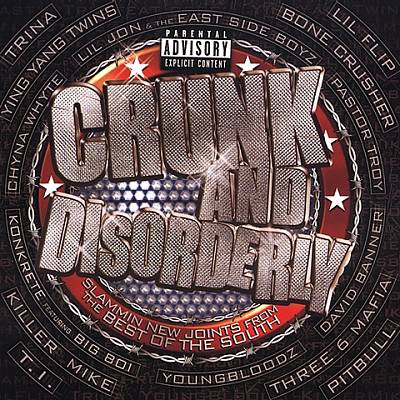 Without a doubt, 2003 was the year of crunk. If you watched any BET music video program for more than ten minutes, you were more than likely to catch some MC’s flashing their gold fronts at the camera and rapping with their southern drawls. Clubgoers all over the nation were reppin’ their hoods and getting hyped to the heavy bass and rebellious chants of Lil Jon & the Eastside Boys.

So what better way to wrap up the year than with Crunk and Disorderly? Packaged with a CD cover similar to those of the as-seen-on-tv Now That’s What I Call Music! compilation series, the album promises to be crammed with “slammin new joints from the best of the south.” Though the Now series isn’t popular with hip-hop, the disc should vie with other holiday releases, being one of the few down-south compilations in stores.

The compilation kicks off with a song from no other than the ambassadors of crunk themselves, Lil Jon & the Eastside Boys. With “What You Gonna Do,” the group provides another one of the riot-inducing call and response anthems that they’re famous for:

It isn’t jaw-dropping lyricism, but it isn’t supposed to be; buyers of the disc expect a compilation full of songs to get crunk to, and that’s what they get. The disc boasts all of the popular names from the south, and while they don’t come as hard as they do on their albums, the majority of the tracks are exceptional. Lil Jon comes up again with Pitbull on the infectious “That’s Nasty,” Trina and Duece Poppi represent Miami on the club anthem “Get Loose,” and Three 6 Mafia delivers another one of their signature head-nodders with “Nan Notha.” The disc takes a few breaks from this furiousness to contribute a few slower tracks. T.I. brings his own countrified bounce with “Turn It Up,” and Pastor Troy and DSGB rhyme over melancholy guitar licks on “I’m Outside.” “Throw Up Yo’ Hood” features Houston’s Lil Flip spitting his conversational, cough-syrup laden flow:

Aside from these slower tracks, Crunk and Disorderly lives up to its title with its energetic content. Though Chyna White’s “What They Want” is extremely average compared to the rest of the disc, the Youngbloodz make up for it on “All Pro” with their hot rhymes and head-nodding production. Konkrete and Big Boi of Outkast close out the first portion of the album in typical D.U.N.G.E.O.N. Family fashion with “D-Boy Stance.” In keeping with the holiday cheer, the next four tracks of the album are “crunk Christmas bonus tracks.” Surprisingly, this is some of the best Christmas music since Run-DMC’s “Christmas In Hollis.” These are genuinely fun tracks that still manage to keep along with the crunk mood of the disc. The Ying Yang Twins bring the energy they always bring on “Ho! Ho!,” and Bone Crusher portrays a hilariously convincing Santa Clause on “Guess Who’s Coming To Town.” David Banner brings his bluesy brand of crunk with “It’s Christmas Time (Jingle Bells),” on which he complains about not having enough money to buy his kids presents. Killer Mike delivers a similar message on “A Christmas Grind,” which also includes a humorous play on a popular Christmas carol:

Closing out with a remix of Lil Jon’s “Throw It Up” with slamming new vocals from Young Buck of G-Unit (who is right at home with the down south vibe, since he was down with Cash Money before signing with G-Unit), the disc does an exceptional job of showing the dent that crunk music has made in the industry. Crunk and Disorderly serves as a great sampler of the Dirty South’s talent, and is an entertaining disc to open up the new year.