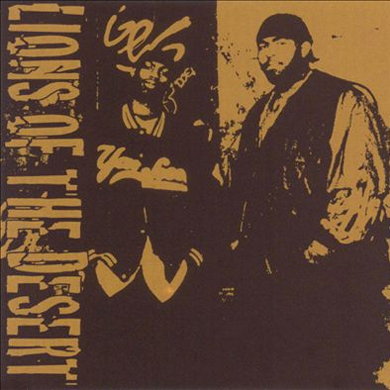 “My ideology’s Islamicly based/with a trace of the thug life” aptly sums up the Middletown NY duo Al-Amin and Righteous Nova, collectively known as Lions of the Desert. This one lyric serves as the cornerstone upon which their creative existence is based. Their eponymous debut is the result of a rhyme partnership that formed while the two were incarcerated in Upstate New York, and the record is a powerful political and social statement. Taking the various doctrines of Islam and blending them with a street sense of reality, Lions of the Desert offer existential self-examination from the perspective of those who have seen the darkest sides of life and have found a form of upliftment, be it music or religion.

As a debut, Lions of the Desert is very solid, built on a thorough foundation of rugged Islam and the forcefulness of conviction. Both MC’s are lyrically tight, well informed, hungry, focused and outraged. While at times they may come off accusatory and judgmental, there is enough personal introspection to balance out what some may consider political rhetoric. Each MC takes the listener on a journey of his personal beliefs and insights, questioning himself and the world in which he lives, and there are as many metaphorical bullet-holes as there are Biblical references. The obvious contradictions of violence and religion are a constant lyrical theme, explored and expressed in verses like: “…How could a man fly into a building?/how could a man strap a bomb to hisself and kill innocent children?/Callin’ hisself a Muslim/That’s not my religion/Yo it’s forbidden in my way of life/I pack a gun and a knife/cause I’m prescribed to fight/I enjoy the right/the wrong is forbidden/a presence worse than slaughter/martyrdom is better than living.” It is not so much hard-line, militant preaching that L.O.T.D. do. It’s more like creating social awareness and dialogue in a publicly accessible medium. They don’t pretend to be saviors or prophets; they don’t claim to have any answers. They use their platform of music to attempt to reconcile the concepts of peace and struggle, and, in doing so, create an interesting and sometimes compelling document of human conflict. At the same time, they personalize their experiences and insights by presenting the listener with first-person accounts of what they know and see.

Musically, L.O.T.D. are at their deadliest over booming, anthemic tracks like the opening manifesto produced by D-Tension; “Destruction of Man.” Al-Amin and Righteous are both fierce and forewarning over an orchestral, modernized boom-bap beat. Its chorus takes on a history of manipulation and conspiracy: “Man made the drugs/man made the guns/man made the ghetto/man made the slums/the battle against evil is Armageddon/in these last days of time/it’s destruction.” Al-Amin’s voice is big and bullish, with just the right timbre to support such lyrical conviction. Everything he spits sounds dire and loud; explosive. His counterpart, Righteous Nova, is equally deft with wordplay, using clever language in which to encode his social, political and spiritual jewels. Together both bring a sense of purpose and meaning to life on the block. The second track; “AI’m Contemporary,” keeps the same heat over a brooding, threatening beat and sonically fuses the subject matter with its soundtrack. The rage displayed lyrically is mirrored by the Messiah-produced beat. L.O.T.D. aren’t afraid to mix it up, either. Just after they hit you in the head with the first two heaters, they turn it around and lace a track like the incredibly hook-friendly “Top of the Dome,” which highlights a more positive and poetic side of the group. Messiah steps out from behind the boards to deliver a verse; penning the line “…seeing is believing and believing is hope/Eternal and infinite is the definition of dope.” “The Gathering” presents the only guest appearances on the album, with rappers Fif Element, Brauu Muun, Emperor and Saga da Sage joining in a cipher-like track over some urgent, crystal-clear keys.

For all of its merits, the album does have a few flaws, the least not being the rawness of its construction. It just doesn’t feel cohesive as an album all the way through and there are some definite throwaway tracks that only take away from the overall strength of the album. Still, the standout tracks far outweigh the lesser songs, and make Lions of the Desert worthy of consideration. In these days, where politics and religion mingle to the point that their distinctive boundaries are blurred, there are few voices strong enough to speak out authoritatively on both sides. Lions of the Desert bring it with passion and deliberate energy, and, with the exception of a few misplaced, incongruous-sounding tracks, they deliver a debut that not only impresses, but gives hope that there’s more to come in the future.