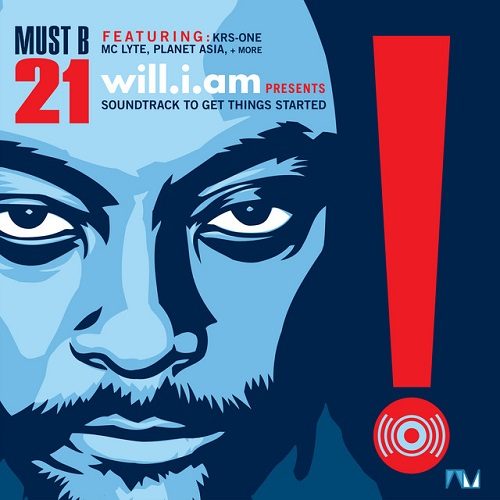 Signed to a label called Barely Breaking Even, it’s not surprising that the latest release from the lowercased Black Eyed Peas rapper will.i.am arrived in stores with no fanfare. BBE is hardly a joke though – it’s the same crew who released Jay Dee’s “Welcome to Detroit,” Freddie Foxxx’s “Konexion” and DJ Jazzy Jeff’s “The Magnificent” among others. Low budget or not, they’ve certainly developed a reputation for high quality indie releases, born in the UK and praised throughout the USA. So whether you knew it or not, will.i.am’s “Must B 21 – Soundtrack to Get Things Started” is in a record store somewhere near you.

The cover is certainly intriguing – it looks like a piece of Obey Giant artwork, and promises guest apeparances by “KRS-One, MC Lyte, Planet Asia + more.” Damn, all these people got down to rap with will.i.am? Not exactly. While will does get some props on the mic, he’s even more talented as a producer as his work on album’s like BEP’s “Elephunk” suggests. Will’s rap appearances on “Must B 21” are therefore somewhat sporadic. He gets down with Phife Dawg on “Nah Mean,” the BEP reunited track “Sumthin’ Special,” and spits the last verse on the pounding “Mash Out” with MC Lyte and Fergie. Otherwise his vocals are often just lending a supporting role on the chorus, such as on the (for all intents and purposes) KRS-One song “Take It”:

“When you see KRS, you will say I’m tall
Cause no I don’t take shorts, not at all
Philosopher, not some trick in the mall
Before rock met rap I was sick of it all!
I mastered this, few rappers on after Kris
Thirteen albums, you do the math on this
Obviously, Knowledge you have to get
What the ignorant don’t know yo they laugh at it
All my college students you know you have to get
Your receipt, I mean degree, it’s only facts I spit
Take it, cause everyone ain’t gonna make it
If you hearin my voice you have a choice, now take it!”

Is this a problem? Not at all. “Take It” is the perfect mixture of funk and attitude for the powerful vocalist to drop his verbal gems over. Phife and will’s “Nah Mean” sounds eeriely like an unreleased track by A Tribe Called Quest. Softly harmonized vocals, wind instrument lifts and brassy breakdowns create a beat so sublime it would be a pleasure to rock it just as a dub with no vocals. The flute solo at the end and the sharp resonance of the triangle’s “DING!” are so sweet it’s almost depressing when the song ends. You can’t stay down in the dumps though listening to Supernatural flow on the follow-up “B Boyz”:

“Listen to me, now while I’m spittin this free
Not the type of cat that you ever see like me
When I, do it it’s good, cause we bump in the hood
And records come out on the street and they go triple wood!
Uhh – the style’s just too hot
Lovin the rhythm, the way, and I make that pop
When it comes to rockin frees yo I just don’t stop
Right now, yo the beat gon’ drop – here it go!”

It’s a stripped down track with a simple three note funk variance and a beat of loud snares and tambourines at the start, that suddenly switches up for an intense breakdown, then goes back to it’s basic form without missing a note, then switches back and forth at will (no pun intended) at the song’s end. Over and over again, will’s skills as a beat maestro are confirmed. Planet Asia and Kron Don’s “Here 2 Party” could be mistaken for a ?uestlove manifeto for Black Thought or Talib Kweli to rock over. “Bomb Bomb” is another Supernatural joint, this time with a 70’s funk blaxploitation type swing. “I’m Ready” sounds like an Atari game gone gangsta, and it’s an all star smorgasboard of Phil Da Agony, Tash and Supernatural all busting to the beat. It doesn’t get better than this.

At a little over 48 minutes long, “Must B 21” is an exercise in hip-hop in its purest most unadulterated form, packed into a highly concentrated dose. From the opener until you rock “We Got Chu” featuring Flii and Planet Asia, it’s a non-stop roller coaster ride of jazzy, funky, ill and uniquely original beats and rhymes. The only downside of reaching the will.i.am solo finale “Go!” is that it makes you wish he had dropped more rhymes on his own album. Still, if will submitted this release as a resume to any rapper needing a beat, from Thirstin Howl III to Jay-Z, they’d be ALL on the dillz. The good news is that you don’t actually need to be twenty-one to appreciate “Must B 21,” since this disc doesn’t even come with a parental advisory (nor does it really need one). If you’re looking for something refreshing and new, pick up this album to help will and his label do better than Barely Breaking Even or going triple wood. It deserves to go gold, because it’s that damn good.