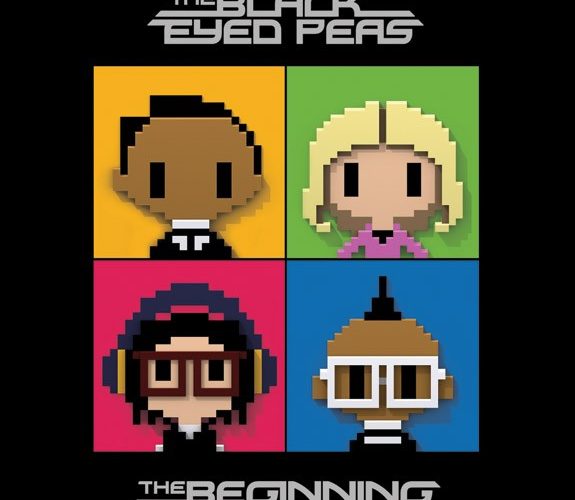 The following conversation with fellow RapReviews contributor Adam B occurred approximately one week ago:

AB: “The new Black Eyed Peas single is such an unlistenable mess I have to wonder if there’s anyone at their label that isn’t a yes man.”

SFJ: “Isn’t that the one with the Commodore Vic-20 music video?”

AB: “It’s really the most awful thing ever. Not even music, just will.i.am punching in sounds.”

SFJ: “It’s like he and Swizz Beatz are going in opposite directions. SB went from jumping up and down on his Casio to making real beats while will went from making ‘Joints and Jams’ to junk and jack.”

Now that I think back on this conversation, I question why I even bought the new Black Eyed Peas album “The Beginning.” Out of habit, I think. To be honest their creative decline began with “Monkey Business” back in 2005, even though that decline has been matched by a subsequent skyrocketing rise in popularity. Perplexing, isn’t it? It seems that the more dumb their lyrics get and the more simplistic their beats become, the more their albums sell and the more they get invited to perform at awards shows and Super Bowls. These things should not go together. We should be awarding individuality, originality and excellence in this world; instead we reward conformity, banality and mediocrity. I’m just as guilty as the next man though because I applauded N*E*R*D’s last release as essentially fun music where “the most successful is the most inoffensive.” One could argue that BEP is in fact the same thing.

Except they’re not. If one were to compare the production techniques of will.i.am and Pharrell Williams, the latter Will clearly reigns supreme. Skateboard P and his nerdy family have mastered music that piles up funky layers of bass, beats, instruments and sounds until they climax in aural bliss. Even if you (correctly) note that N*E*R*D often write raps at grade school levels, the vibrations of their songs translate into emotions you can actually resonate with. Uptempo party jams, slowly drawn out plaintive cries for help, joyous exultations of success, philosophical musings on the meaning of life, all of these things can be drawn out of the background of a N*E*R*D track. The music is literally their message, as much or more than the lyrics. That’s not to say that Pharrell’s raps are a complete afterthought, but they’re definitely secondary to the soundscape you vibe to.

will and the Peas seem convinced that the exact opposite production strategy is the right one, and if the global sales of “The E.N.D.” are any indication they’re right. With each progressive album, the group strips away more instrumentation and orchestration, dehumanizing their sound as electronic notes and sounds replace playing (or recreating) traditional instruments. Even their vocals have become less human, modulating more and more to the point it’s not even AutoTune any more – you could mistake them for rapping and singing robots unless you actually saw them live. They freely sample these vocals in their own songs, repeating them, reshaping them, swinging the pitch artificially up and down, to the point you can hardly tell if there was an original vocal to begin with. It’s almost as though they are making rap albums using Xtranormal these days. On a majority of their songs Fergie is the only one who sounds remotely real. The electronic, dance, techno beats make their songs for dimly lit clubs with heavily intoxicated young adults – easy to mix and just as easy to miss.

No will, I refuse. I’ve got some bad news. When every line you use, lacks the spark of one fuse, syl-la-bles that you abuse, do not win in fact they lose. The lyrics of “Don’t Stop the Party” are as bland and simplistic as the underlying beats, and it’s just as well that the entire presentation feels like rave music you shouldn’t be paying attention to anyway. This is music for an ecstasy generation with a hypersexual Jack Harkness level of awareness, willing to mate with anything that moves, driven to a fever climactic pitch at about 4:49 in the over six minute long song. It could honestly be 10 minutes, or 20. It hardly makes any difference. You could loop any section of it for two or three minutes continuously and it would sound and be the same. No one could notice the difference, no one would care enough to.

It’s not just that their music has lost any of the soul and swagger it had almost a decade ago, the Black Eyed Peas have gone beyond making bad music with meaningless raps to making ANNOYING music. The farting electronic sounds of the single “Do it Like This” are so wretched they make me want to drink sizzurp until I’m so slizzerd that the awfulness sounds good or I pass out – the latter would probably be preferable since I don’t think any level of medication could make this better. “Rock the Casbah, rock the dancehall/I want punani someone get me belly dancer/Who got the answer, for the dancer? Nobody know but I got music to enhance ya.” Once again, no will, you don’t. Why do you ask the question “Why hold the gun if you can’t pull the trigger?” It’s clear that you are the one who is firing blanks – your gun is totally impotent.

Trying to find songs on “The Beginning” that aren’t completely annoying or totally inane is a real challenge. “The Time (Dirty Bit)” starts out promisingly enough by ripping off “(I’ve Had) The Time of My Life” for the first 59 seconds, then turns into that electronic nonsense that makes you think your speakers are malfunctioning badly. Perhaps the sheer lack of lyrical depth of “Own It” actually benefits it in a N*E*R*D way, as will’s AutoTuned lyrics about how easy it is to be famous seem apt and “I wanna do it big like Oprah” is actually a clever double entendre he clearly didn’t intend. If you have to do a disco BEP song, Fergie’s singing and pseudo-rapping on “The Situation” can carry the presentation fairly well – I’ll take her Situation over the one on Jersey Shore. Her vocals also heavily benefit “Just Can’t Get Enough,” which shows tantalizing glimpses of real piano instrumentation before drowning them in electronica.

Some people will conclude from the opening exchange with Adam B that I had preconceived notions about this album before writing the review and never gave it a fair chance. The truth is I had an entire week between then and now to revise my opinion and nothing about the musical mish-mash of “The Beginning” has gotten any better with progressive listens. This is not an album that gets better with time like a fine wine – it gets more sour and more grating with each passing moment. Playing it again makes you start to imagine things that would be less torturous – waterboarding, bamboo shoots under your fingernails, having your eyelids glued open while being forced to watch 24 straight hours of Bill O’Reilly, et cetera. There’s no getting around it people – this album ABSOLUTELY SUCKS. Now I realize why I spent $11.99 on this album – so you don’t have to. Consider yourselves warned and hopefully saved from the pain and torment I’ve had to suffer. I need some old school P.E. now just to wash this awful sound out of my head.