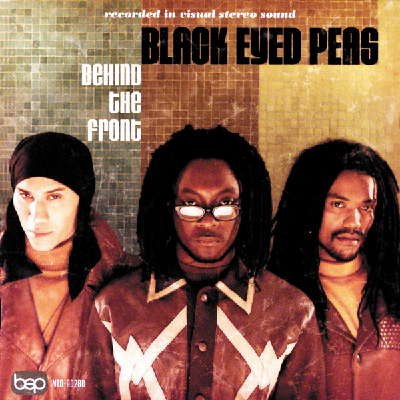 Black Eyed Peas :: Behind the Front

Believe it or not, there was a time that the Black Eyed Peas were synonymous with underground hip-hop. I guess it wasn’t all “underground” as their initial release was on the flagship label Interscope Records , but as far as what they represented; graffiti art, break-dancing and organic beats, it appeared that they were to bring the appeal of hip-hop culture into the mainstream (instead Jurassic 5 took that role). Strangely, the exact opposite happened as BEP seemed to lose their path and the mainstream took much of the hip-hop culture out of them. Injecting them with a healthy dose of pop steroids and adding an unnecessary sex symbol in “Fergie” was what the big wigs thought would help move units and though they were right, it is a sad truth, because nothing they have done has touched this strong debut from ’98 entitled “Behind the Front”.

“Welcome to the rap game, where the music is the business, but the music isn’t the business,” states Will.I.Am, at the end of the opening track “Fallin’ Up”. In retrospect, this comment seems ridiculous. The Black Eyed Peas that present themselves a decade after this debut do not live by this code. The vicious dichotomy between the Black Eyed Peas then as compared to now is immediately apparent when popping in “Behind the Front”. Despite the problems previously mentioned about the direction The Black Eyed Peas took, this might be their best album because it was 8 years in the making. Will.I.Am, Apl.De.Ap and Taboo joined forces in 1993 and almost immediately landed a deal with Ruthless Records (the very same that housed Eazy-E and Bone Thugz N’ Harmony). They treaded water for awhile on Ruthless but in the wake of Eazy-E’s death and the general differences with the what the label represented caused them to be free agents and get swooped up by Interscope.

Rewind back to “Fallin’ Up”. This is a spectacular opening track that starts with the pitter-pat of lightly tapped cymbals then kicks into a strikingly powerful drum kick. The opening verse expresses the same as the rest of the track; a message of positivity and holding music to a higher standard than the rest:

“Focus on this, the ear seductionist
More the lyricist in this rap metropolis
More like an activist, we give it to you all
Presentation will make you have a ball
Sounds start conceiving causing you to meditate
Manipulate the line with hypnotical legislate
We far from the fakes, we never fake moves
But jealous motherfuckas seems to just disapprove (and talk shit)
And who the hell he be having a fit
Yo, he ain’t got shit, that’s why he set trips
I identified what he rips which consists of nonsense
nothing less than bullshit (Westside!)
The fool can’t hang with the all around remainders, a real entertainer
Reviver of the true art form of, hip-hop
Explore non-stop, entertain ya till you drop”

The Black Eyed Peas and their bi-product, Fergie, barely create words or sentences that make sense at this point in their careers. When The Black Eyed Peas focused and put thought into their rhymes they reached the upper-epsilon of feel good hip-hop lyrics. Please note that the lyrics in the passage are unedited, whereas on the actual disc the words “motherfuckas” and “shit” are replaced by censoring sound effects, which just goes to show that rap fans do not need a clutter of foul-mouthed hogwash to be entertained. This is something that The Black Eyed Peas have stayed true to, to this very day. Later in the song, Apl De drops another exceptional line about their image with, “I see you try to diss our function by stating that we can’t rap/ Is it because we don’t wear Tommy Hilfiger or baseball caps?/ We don’t use dollars to represent/ We just use our inner sense and talent.”

The snappy “Joints & Jam” proved to be a successful first single from the album. The video portrayed the three members facing the camera and doing some of their funky break-dancing moves. This is easily the most accessible track on the album but it still presented a raw, fun-loving vibe. The tight chorus coupled with the harmonizing female vocals make this track a winner. The simple and catchy verse repeats “That’s the joint/That’s the jam/Turn that shit up and play it again!,” and that is what most listeners will want to do as it is a true head-nodding gem.

“Karma” was the lesser know of the 12″ singles. “Karma” is a darker piece than most of the rest of the album. The song has a strange, but melodic, reggae/Spanish tone. The brooding subject-matter is described simply by it’s title. The following verse gives an idea of the difference between upbeat tracks like “Joints and Jam”:

“I’m the caboose of the wrong doings you produce
The wild tail of the tornado running loose
You tie the noose,
I kick the chair I’m the cinai that snatch your life while you gasp for air
The echo of the “Fuck you” that boomerangs to hurt your loved ones
The thief that held your son, held by ransom
The pervert that raped your wife
The hand that held the knife that took your life
Who shot Tupac and Biggie?
Now I’m coming after you like V-W-X-Y-Z
This is cause and effect, the domino effect
The “What goes up, must come down” effect
You hopin, though, that you had a hand in doin the doin
The conclusion of the evil that you ended and start pursuing”

With this we are given another example of the shockingly powerful lyricism that The Black Eyed Peas are capable of. Another thing that made them special was that all of the founding members are very capable emcee’s and they traded bars with an energy that seems to have dissipated over time.

The production on this album is something that would be like something found on a Tribe Called Quest/The Roots crossover track. There is the appeal of the soulful stuff that Tribe offered–at the same time bringing the density of The Roots live instrumentals. The personnel that goes into all of these compositions is something special. The production makes use of a violin, cello, drums, flute, organ and, of course, good olâ€™ fashioned vinyl. Samples are kept to a minimum in place of this shrewd musical pallet.

The few problems that stem from this album come from the fact that mediocre songs get lost in a sea of good to exceptional joints. Moreover, the compelling ones outshine the mediocre to such a degree that you skip past the okay stuff like; “Be Free”, “Duet” and “A8”. Meanwhile, almost everyone that hears the album will admit that the best tracks are “Joints and Jam”, “Karma”, “Fallin’ Up”, “Clap Your Hands”, “The Way You Make Me Feel” and “Love Don’t Wait,” with little argument. The subject matter may ultimately be too limited in its scope.

The follow-up to “Behind the Front” was the aptly-titled and unbalanced album that showed both sides of The Black Eyed Peas and began the transition into the monster they have become. “BEP Empire” showcased scratching by the legendary DJ Premier as opposed to vastly conflicting sonic soundscapes like “Hot”. The ultimate sell-out came in the form of adding an additional member to the group, Ms. Fergalicious herself, for subsequent releases in 2003 with “Elephunk” and 2005’s “Monkey Buziness”. Though the Timberlake-assisted “Where is the Love?” brought BEP from “Behind the Front” to the forefront and brought them a success they had not realized before, it also destroyed what they once were. Will.I.Am still has banging beats but the lyrics of some of these guys “Get Retarded” quite often.

I challenge those that hate pop-friendly Black Eyed Peas to listen to “Behind the Front”, because you will be pleasantly surprised by the ability that they have and the quality of music that they once created with a love for the art. “Behind the Front” will remind hip-hop heads of some of the greats that promote positive music, similar to Digable Planets, Tribe, J5, etc. Nowadays, BEP seems to more worried about where the money is, more so than “Where is the Love?”. The best chance we have of hearing a tolerable version of this group is if there is a monumental shift in the landscape of rap music and people start respecting the good stuff the way it ought to be.