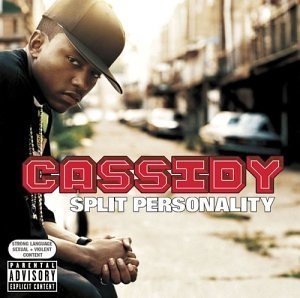 No Sundance Kid here, and his first name isn’t Butch, but Cassidy’s certainly made a name for himself. Whether or not you’ve peeped him on any number of different East coast mixtapes, his “Hotel” duet with R. Kelly has been one of those inescapable songs you hear everytime you turn on the TV or the radio. It’s hard at times to tell it’s not R. Kelly’s song. Cassidy has some very short verses between R’s vocals, but he tries his best to impress – even going so far as to throw in some old school Sugarhill Gang in the process:

“I be stayin in a ho-tel, not the mo-tel
Or the Holiday Inn (Say whaat?!)
If that girl, don’t participate
Well then I’ma take her friend (Say whaat?!)
But if, mami is wit it then, mami could get it if
Mami a rider I’ma, slide up inside her
I got a suite, you could creep on through
I know you try and get your freak on too”

J Records seems ready to commit to Cassidy as a star of the future. “Split Personality” brings out some of the big heavyweights of hip-hop to lend support to his fledgling career. Jazze Pha lends a hook to “Lipstick.” L.O.X. members Jadakiss and Styles P guest on “Can I Talk to You” and “Pop That Cannon” respectively. And of course, what new rap album these days is complete without a guest appearance from Snoop Dogg? You can find him on “Make U Scream,” a smoothed out soul track about staying together. Cassidy’s rap on commitment is not just for a woman to be devoted to her man or vice versa, but a surprisingly strong endorsement of monogamy too:

“I was told you ain’t got it nice, until you got a wife
But nah I’ma baller cuz, I’m never gonna fall in love
Psych – that’s a damn lie, ladies put yo’ hands high
E’ry man should try to get a wo-man to stand by
It’s called devotions, emotions could make a man cry
But ma wipe the tears and just stare in that man eyes
Prove that you there for him, prove that you care for him
That’s how you gotta act to prove that you got his back
Prove that you not a rat, don’t creep and hold ground
Hold him down cause you know what comes around goes around
And I’m older now, and it might sound kinda weird
But man, all them damn AIDS commercials got me kinda scared”

If Cassidy were enrolled as a student of Rapping Fundamentals 101, it’s safe to say he’d get a passing grade. Not the highest score in the class perhaps, but far from flunking out or having to drop and retake the course later. He’s got clear diction when speaking, breath control to keep the flow, and a voice that’s acceptable in both tone and his usage thereof so that his delivery impacts to your ear. If you had to draw a comparison, he falls somewhere between O.C., Canibus and Black Thought, the latter no surprise given Cassidy is from Philly. He reps for the city hard on a skit and song both entitled “Tha Problem,” the latter of which uses a classic old school beat from Public Enemy’s “Terminator X to the Edge of Panic” for Cassidy’s rap:

“I’m like, if I ain’t right you can say I’m wrong
But Mr. DJ, can you play my song
Please, play somethin that’s good for the ear
Please, play somethin that the hood wanna hear
So when the radio go to put that trash on
Call ’em up and say PUT THAT CASS’ ON!
And I ain’t dissin nobody, but if e’ry rapper died
I wouldn’t be missin nobody
‘Specially if it ain’t Styles, ‘Kiss or nobody
Busta, N.O.R.E., Swizz or nobody
If it ain’t Drag, Kim or Fat Joe
I could care less if a cat gotta lay on his back yo
So? I don’t owe y’all niggaz
And y’all might be alright but I don’t know y’all niggaz”

Cassidy goes on to give more shout outs to rappers he feel doesn’t deserve the axe (Wyclef and Nas are named) but the point is made – Cass’ is gassed off his own ass. Whether you like it or hate it, it’s an essential trait for most good entertainers to have – the arrogance to believe they are not only the best at what they do but that other people want to see or hear it too. To his credit, Cassidy mostly lives up to his self-image. This is a man who brags on “My Interpretation” that he’s “surpassing so-called imitations through dedication, motivation and concentration” while whack rappers are “typically, pissing me off like urination.” Is it Pharoahe Monch worthy in cleverness and structure? No it’s not, but then very few rappers past, present or future ever have been or will be. In comparison to the other new rappers he holds so much disdain for, Cass’ holds his own. He portrays a hard image, but doesn’t go overboard littering his album with violence and corpses either.

For what it’s worth, Cassidy is witty enough to keep his rhymes interesting, and good enough at his delivery to make you want to hear what he has to say. It’s on the tracks where he gets his own time, like the rock’n’roll influenced “Blood Pressure” or the methodical and funky narrative “Real Talk” that Cassidy’s star rises above being R. Kelly’s compadre, friends with the L.O.X. or down with Swizz Beatz, who lends his weight to this release and produces some of his career’s best beats for Cass’. By the time this album closes with the remix of “Hotel” featuring Trina, you may not think Cassidy is the greatest thing since sliced bread, but you’re not going to hate him either. In the end Cassidy proves he doesn’t need the Sundance Kid – he’s a star all on his own.