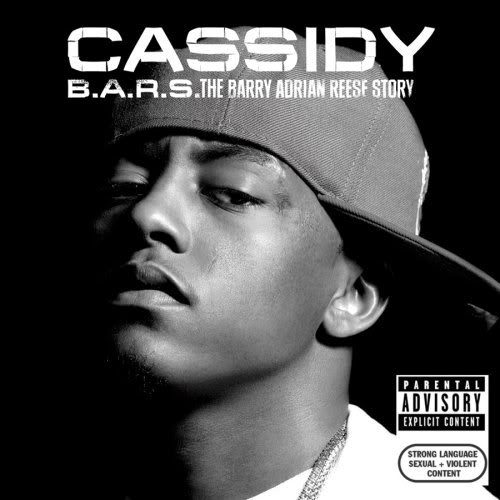 Cassidy fans will remember that “I’m a Hustla” began with Cassidy’s internal battle, “The Problem Vs. The Hustla.” Much like that effort, the introduction to “B.A.R.S.” (“B.A.R.S. Vs The Hustla”) sets the tone for the rest of the album. Here, B.A.R.S. acts as Cassidy’s mature alter ego â€“ the Cassidy that has spent eight months in jail and recovered from a life-threatening car accident since his last album.

Most telling however, is that while The Hustla loses the battle, he refuses to concede. This battle between personalities rears its head throughout the album, making it a schizophrenic effort. For all that Cassidy has grown and matured, he recognizes that he’s built his career on hard, witty raps about a harder lifestyle, and makes an effort not to alienate his fanbase here.

This is never more apparent than when the album opens with its lightest song and first single, “My Drink & My 2 Step.” Swizz Beats contributes an incredibly catchy beat and hook here, and when it’s followed up by the punding, gun-toting “Where My Niggas At,” it seems like “B.A.R.S.” brings the same old Cassidy. Not that it makes the songs themselves any worse, they both see Cassidy at his best. Still it’s odd to see Cassidy bragging about his newfound maturity, and follow it up with the unchecked braggadocio of “Where My Niggas At”:

“I’ll leave the biscuit on my hip and just shank ya’ll
Only thing ya’ll niggas ever shot was a paintball
Or a cap gun; you could get your hat spun
You gotta know I clap my gun, and you ain’t that dumb
Back when I was young, no bull, I pulled triggers back
I’ll be in the hood, ’cause I’m good where my niggas at
I’m the general, I’ll let my military get you
With them military pistols, that’s military issue
(Where my niggas at? Huh? Cock gats yo!
Squeeze them triggers back, huh! cock gats yo!)
If I gotta, I’ma pop a nigga, lay a nigga down
I ain’t playin, I’ll spray a nigga, lay a nigga down!”

This is just a prelude, as “I Pray” smoothes the album out, introducing us to Cassidy’s more reflective side. It’s here where “B.A.R.S.” stops being fun, and gets more interesting. Like most rappers, Cassidy has to deal with the dilemma of trying to keeping it street, while praying to “get out these streets.” It’s a true sign of his growth that he admits that he (and everybody else) eventually has to leave the ‘hood behind him.

The problem with this is, as great as him growing up is, it doesn’t always translate into great music. At the very least, it loses the excitement of songs like “I’m a Hustla” and “My Drink & My 2 Step.” Worse, his beat selection is extremely poor on the more introspective tracks. Much of the album lacks personality musically, and the album begins to drag as it takes a more somber tone. It only makes his lyrics, which were already less exciting, even harder to listen to when much of the production is so bland.

It’s hard to criticize maturity, but it hinders him from making the type of music that made him successful in the first place. At the same time, the surest way to make bad music would be to force an album of empty thug and party tracks when they have a decreasing relevance to his life.

This dilemma colors the highs and lows of “B.A.R.S.” On the one hand, Cassidy specializes in more light-hearted music. When his and Bone Thugs’ speed-rapping over “Cash Rulez,” stands out among the slower, more reflective tracks, it’s apparent that the exciting braggadocio raps is what he’s best at. But when he’s reflecting on his life over the self-produced “All By Myself,” it’s just as apparent that this is where his heart is at:

“I want to the thank my fans â€“ good looking for the mail
‘Cause I was going through it when they put me in the jail
They put me in a cell, just me an the rats
And my relationship with God is what kept me relaxed
The D.A. will say anything except for the facts
And they had a lot of evidence, except for the gats
Before they prove you guilty, they’ll treat you like a criminal
They tried to give me first degree; they said it was intentional”

All and all, “B.A.R.S.” is stuck between two extremes: the exciting, mindless raps of “Where My Niggas At” and the interesting but dull introspection of “Leanin’ on the Lord.” Very rarely does any of it find a happy middle ground. The only real example of this comes in “Damn I Miss the Game,” where Cassidy criticizes the rap scene he is a part of over a silky smooth Bink 6 beat.

While Cassidy obsesses in self-battles, his music continues to reflect polarizing mentalities. It’s commendable that he’s trying to grow as an artist, but “B.A.R.S.” is full of growing pains. It makes for an uneven listen that’s disappointing for an artist that’s both talented and well-intentioned. The album’s most exciting feature isn’t the music, but the fact that it seems to mark a major turning point in the “Barry Anderson Reese Story.”