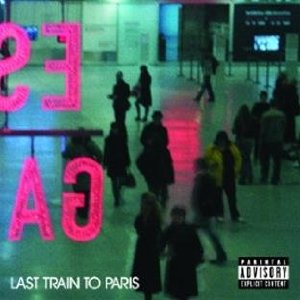 I love the Eurostar from London to Paris. That relatively recent but now iconic train journey, connecting an island to its closest continental cousin is both symbolic, and functional. I’ve been on it many times over the last dozen years, and since I love trains a whole lot more than planes, it is a way to effortlessly visit France/Belgium for the day/weekend. That is one of the many reasons I approached “Last Train to Paris” with an equal mix of hope and trepidation: I too have caught the last train to Paris. Hell, I’ve even picked up a girl on the train there (now I’m just showing off). But I just hoped that Diddy wouldn’t trivialise it for the sake of a story.

I needn’t have worried, as the “concept” behind this album is as loose as the girl I picked up that time on the Eurostar. In fact, it is barely worth paying any kind of attention to, as it is more a random anti-narrative, akin to a collection of vaguely interconnecting short stories (not entirely unlike “Paris, Je T’Aime”). It has a vast collection of authors, singers, rappers and producers; catchy choruses, solid lyrics, too. But truly the star of the show on LTTP is the MUSIC. After one spin, it seems pretty underwhelming, but give it a while and the hidden pleasures start to reveal themselves. Diddy hasn’t really gone on to make the full-blown Ibiza driven album he’s been threatening to release for many a year now; it’s actually a lot more subtle and interesting, practically a club album that needs to be listened to on headphones.

What do you need to know about the lyrics/concept? Not a lot, trust me. The only OTT Diddy-style track – the surprisingly brilliant Alex da Kid helmed “Coming Home” – is co-penned with Jay-Z, with possibly the most interesting confessionals he’s written for 4 years (“Lost One”). It doesn’t really fit with the rest of the album, but by that stage, you’ll probably be past caring. Diddy himself doesn’t really show up on that much of the album, which is probably a wise decision, as he not only allows the limelight to shine on more talented performers, but also upon the wonderful music.

I have to admit that, somewhat like “Distant Relatives,” I’m not entirely sure that the entire American market will really “get” this. These aren’t traditional 4 x 4 dance beats, more an amalgamation of the various sub-cultures of different genres. “Yeah Yeah You Would” is a hypnotic, clattering opener, shimmering cymbals and winding leads; “I Hate That You Love Me” is a lovely piano-driven, syncopated Latin house number; “Ass On The Floor” misleadingly opens up as Major Lazer’s “Pon Di Floor” but quickly trades it in for synth pads and lush harmonies. It’s an interesting, challenging opening to the album, and works well.

One less successful part of LTTP is the insistent sequencing, allowing very little pause for breath, subsequently leading into random segues. The transition into “Looking for Love” doesn’t work, and the song is decent, but underplayed (bizarre for Diddy), kind of like “Lil Freak” minus the Stevie Wonder sample. “Someone To Love Me” is a brisk, bass joint featuring little more than a chopped vocal and Diddy himself; “Hate You Now” is like an overproduced take on Massive Attack, with snares that resemble the sound of train tracks; “Yesterday” features comeback kid Chris Brown, on a downtempo track lacking an overt melody. Next up, the double centre piece: firstly, “Shades,” where Lil Wayne successfully pays homage to Andre 3000, Justin Timberlake raps like Prince, and Diddy basically sticks to voiceovers. “Angels” is a stunning reimagining of that classic old beat, with Rick Ross (surprisingly) dropping a mind-blowingly brilliant verse about (unsurprisingly) expensive shit; Diddy goes all “808s & Heartbreaks” before Biggie pops up, and the double-whammy of “Shades” and “Angels” works superbly well, add depth, subtlety and ambition to the crucial core of LTTP. Trey Songz displays precisely why he is THE male R&B singer of the moment, completely owning “Your Love” – right up until the Dirty Money girls ruin it with cringe-worthy, overly explicit lines that just don’t fit the album.

Weezy drops in on the woozy “Strobe Lights,” think Timbo/Danja with a bit more daring, but a bit less oomph. The excellent “Hello Good Morning” crops up, with that constantly changing beat causing havoc on the dance floor (even if the lyrics are too simplistic). Perhaps one of the few droppable tracks, “I Know” is an unnecessary overdose of syrup. The excellent “Coming Home” and a superb feature from Drake on “Loving You No More” help close the album in real style, even if the narrative barely warrants a millisecond of thought.

This is one of the strangest albums to come out in 2010. The lyrics and concept are, almost universally, pretty throwaway, simply because such a huge number of narrative voices feel cluttered and there is a lack of any perceptible meaning. But, kind of like “My Beautiful Dark Twisted Fantasy,” you will be checking for this thanks to the subtly exceptional music, which is actually more challenging and cutting-edge than practically anything on Kanye’s album. Unfortunately, most people will disregard this album simply because Diddy has his name on it – oh well, their loss. Whilst this isn’t as coherent in a traditional hip hop format as the somewhat underrated “Press Play” (an album that basically copied “Late Registration” to varying degrees of success: I certainly enjoyed it), “Last Train to Paris” is an album that is very difficult to get bored of, mainly owing to the layers upon layers of excellent music that continue to lap against your toes – I would actually buy an instrumental version of it. It’s both better and worse than I was expecting, but it is certainly one of the most unique, ambitious and purely inimitable albums released this year.