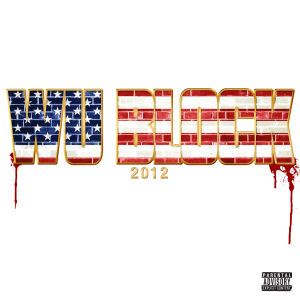 Its title might bring to mind any of those mash-up mixapes from around ten years ago, but “Wu-Block” isn’t some hustling DJ’s ‘What if the Wu-Tang Clan and D-Block actually got together and made a record’ mix burned on a CD-R, it is exactly that record. Initially more widely conceived, the project is co-headed by Ghostface Killah and Sheek Louch but features appearances from various Clan members and both Styles P and Jadakiss on the D-Block side.

There was a time when you could draw a relatively clear line between these two camps. Wu were the elite team of rap’s underbelly, thrilling, vigorous, brilliant, while the Sean Combs-monitored trio of Sheek, Styles and Jada (then known as The LOX) painted a more streamlined, shinier portrait of the same era and area. But their transition from Bad Boy to Ruff Ryders to finally the self-contained D-Block is also a history of emancipation from the influence of the music industry. In short, that line has become blurred and maybe it’s no coincidence these two crews originating from New York rap’s periphery (Staten Island and Yonkers) have persisted and eventually joined forces.

On an individual level, Ghostface Killah and Sheek Louch seem an odd couple at first as well. Providing the Clan’s most consistent and creative solo output, GFK shouldered the weight of the Wu in critical times almost all by himself. Louchiano on the other hand was never able to follow his partners’ footsteps and his solo efforts were often derided. But while the two may not be at eye level lyrically and technically, they share vocal passion and colorful imagery. They also both have a rather peculiar stressed demeanor sometimes, which creates an unsual bond between the two. With one exception Ghost and Sheek pass the mic to each other on all tracks, but it’s ostensibly one of “Wu-Block”‘s strengths that they pass it to the likes of Raekwon, Styles P, Method Man and Jadakiss as well.

SP assists them on the unimaginatively titled “Guns For Life,” a grotesquely sentimental ode to the guns in their lives, cinematically scored by Bay Area production duo Fith Estate. Deck joins the conference call “Different Time Zones,” for which Frank Dukes provides a vintage Wu beat with mystic howling female vocals. Kiss laces Red Spyda’s dramatic drum roll-driven “Stick up Kids” (which replaces the original version’s Fat Boys sample with a “Ha-ha-ha, stick ’em” interpolation). Chef completes the boastful “Do it Like Us,” orchestrated by Erick Sermon rather untypically with an ominous background. Meth jumps on the clunky, club-aimed “Pull Tha Cars Out,” Cappa on the glitzy soul suite “Pour Tha Martini,” one of many instances where the self-proclaimed Silverback Gorilla provides solid, functional rhymes:

“I don’t get pat down, you know what’s on the waist
I don’t mean jazz when I say I Count Base
Fly Louis sneakers, Purple Tape comin’ out the speakers
Bumped into my high school teachers
They said I wouldn’t be nothin’, sittin’ on the bleachers
Now I’m sittin’ in a Phantom tryina figure out the features”

It’s no knock on Ghost, but the album’s highlight, “Drivin Round,” goes by without him. Termanology (yes, that Term) and Moose hook up a beautifully delicate gem of a track, Erykah Badu chips in subdued angelic vocals, Masta Killa and the GZA give highly refined, seasoned performances, and Sheek Louch seconds them with keen observations of his own:

“Out the window of that Range or that muscle car
Arm hangin’ out the window, diamonds in that big Chopard
Weed in a cracked cigar, more sour in the jar
Lookin’ both ways, I’m cautious when I’m (drivin’ round)
Hoodrats that’s fresh but barely feed they kids
Lil’ kids that’s killers and love doin’ bids
Unemployment lines, Mexicans’ll work for nothin’
You pray with him but you don’t know who that priest been touchin’
Liquor stores, strip clubs, filthy whores
Somebody daughter gettin’ ten singles to drop her drawers
Crack fiends buy a new TV for twenty beans
Niggas tryina get money, police (drivin’ round)
Blue flags, red flags, different gangs
OG’s still outside, it never change
McDonald’s, Chinese food, a thousand chains
I’m just tryina use my brains when I’m (drivin’ round)”

His current partner in rhyme meanwhile has his usual moments of stunning creativity, both in the short (“I do hood yoga / I pull muscles countin’ money, need a new shoulder”) and the long form:

“Every hood spot, they know me
Loyal females who can’t just give me the twat, they show me
Like I’m a big stock broker on Wall Street
I said, ‘Nah, I’m that big drug dealer from 4E’
[…]
Light-skinned, said she a Virgo
Said she love my roll game and my birds, yo
A baby Ghost appeared from the blunt smoke
It lingered through her hair and set into her clothes
Her bag fell, I saw a .38 snub nose
I stole that and still fucked her when the club closed”

Starks and Sheek may not possess that Ghost/Rae chemistry but they work well together. Two of the tracks they keep between themselves even stand out overall. “Been Robbed” is criminals’ comedy hour set to a similarly tongue-in-cheek Joe Milly beat that incorporates a fitting vocal sample exclaiming “Help, I been robbed!” And “Cocaine Central” sports the album’s heaviest beat, a darkly sparkling Shroom production that, along with a chilling Styles P hook, carries the track till the end.

“Wu-Block” isn’t a necessity, not for the Wu, not for the Block, not for hip-hop, not for the fans. And yet while it may be nothing more than a stopgap for all involved, it makes sense, not in theory but de facto. The co-headlining brings a certain focus to the project while the added features make it fully evident why these two posses, who as entities are arguably past their heyday, have remained on the scene. Whether it’s the relaxed old boys’ club vibe of “Crack Spot Stories” or the musical flying guillotine “Comin For Ya Head,” these NY OG’s have something to offer that has become more rare every year – unapologetic, confident, passionate street rap.