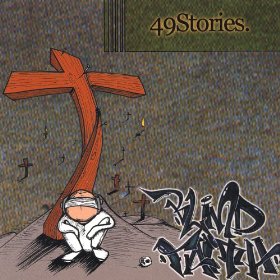 49 Stories is composed of a producer (Gollum), and two mic rippers in Paradox and Once. “Hailing from the land-locked isolation of Colorado,” this trio drops their 3rd effort and threaten to clean out their closet and bare all. I must say, the opening track is a “gem entitled â€˜The First 49 Story,’ and doesn’t allow you to stop bobbin’ ya head. A sexy Spanish guitar and some funky fuckin’ drums play second fiddle to a rainstorm; a perfectly-constructed beat to open up an LP. Think of “Life After Death” and “Somebody’s Gotta Die.” Here, Once and Paradox briefly note:

“We all love to write, we all have an opinion
We all have to adapt to the talents we were given
We all have hidden agendas, we all want to live our dreams
We all see thru each other’s eyes as strange as it may seem”

It’s quite a taut and concise way to depict the mentality pervading the thoughts of these hicks from Colorado. “A Brighter Future” warns of an apocalypse, but manages to have a positive message. The interesting portion of “Arms Bend” is the thought provoking sound bytes from “Adaptation,” as uttered by Nic Cage. Over here, Paradox pontificates:

“Well Once taught me the costly lesson of how to tear off a name tag
Funds are awfully scarce at present so maybe I should face facts
I’m supposed to nurture an urge to murder so-called Arabs
but I’m closer to hiding from those that are lying on this side of the train tracks
[…]
I tried to fight wickedness but couldn’t get the case cracked
What good is my white picket fence if I always got the gate latched?”

“Hardcore” is haunting and each line of every stanza is pregnant with verbiage. These cats flow semi- rapid and stretch the beat to the fullest. Strings and piano riffs dominate “Hourglass” and halfway through, Gollum’s beat flips to a more solemn mood. “Imagination” is an instrumental, as is “Back Breaks” and “Escape.” This one has an effectively used “Sesame Street” sample, where Ernie tells all the kids to â€˜close their eyes.’ Some real smoothed-out shit is these instrumentals; especially the horns and piano chords of “Escape.”

Paradox does a solo effort on “Yestermorrow” and is a tad indecipherable at certain portions of the verse, where he espouses tales of begging, borrowing and stealing. On “Fake Pain” Once forays himself on the cut, and is quite uninspired. Perhaps he was trying to match the mood of Gollum’s production. Another talented artist in Sentence creates the beat to ride to in “Hypochondriac,” and it’s a worthy addition to Gollum’s compendium of beats. The drum-programming is reminiscent of Primo on Jeru’s “D. Original.”

The LP’s lone posse cut is “Together…” and I’m sad to say that there are several wicked verses on this one. The bullshit thing is that all these muthafuckas sound the same. There’s like 7 brothers on the mic, and they all flowin in a similar accent, tonality and pitch. Sounds like they trying to out-pronounce each other. Here’s an example from some cat that couldn’t stand out. Call him the unknown MC:

“Left brain, says to the right brain
tell me what your mind frame, tell me where your head’s at
Show me what we’re here for, gimme just a small beat
Cause I wanna see more than this fuckin bar seat, all week
I’m not tired, I’m just energetically-challenged
And we could get a lot higher if these methamphetamines were balanced”

“These Marionettes are barely a threat
MC’s, I bury them, you gonna stare me to death?
I leave these cats tongue tied like cherry stems
The very dense crew moves through mind compartments
Took lines apart, wit ya rhymes tied up in my apartment
and euthanize the hostage
Got rap locked even more than hard rocks
I cracks spots so back off, the blast off, cut the trash talk
I pop lock in a black box, compact like lap tops, smash spots
Can’t stay gone, don’t try to hold him back
Hold weight like shoulder straps
Hotter than wool skull caps on Gollum tracks”

Once does his best to stamp the lackadaisical flow over a Clint Black-type beat on “So Many Kids?” At this point, the monotony of the insurance salesman flow was testing my patience. Effort then appears with our dynamic duo on “Cultural Disease” to comment on the war. Once holds it down again on his own in “Drop the Drums.” I have no doubt that were he be to transcribe his lyrics, and put them in book format, they’d make for some insightful and thought provoking poems. Slap a mike in front of him and it’s time to head for the hills. Literally, no mic presence. Ditto for Paradox. They attempt spoken word on “Ratfood for Mathews” to no avail as their banal, boring voices urge your hand to instinctively press fast fuckin forward. “City Black” is yet another sombre “tightly-composed cross section of life” created by Gollum. Fool and Bantar try to make a name for themselves on “Organ Grinder.” They fare admirably in re-telling this amusing anecdote. “Winter Weeks” closes shit out with more Charlie Kaufman-isms, and rounds out 78 minutes of a 19 track LP. Musically, Gollum deserves praise, as do his two MC’s for content, subject matter and thought provocation. But, this is gon be graded on taking into account they sound like Bryant Gumbel rhyming real fast and sayin some dope shit. You wanna nod ya head and get live to it. It’s Bryant fuckin Gumbel though! Ya just can’t do it.