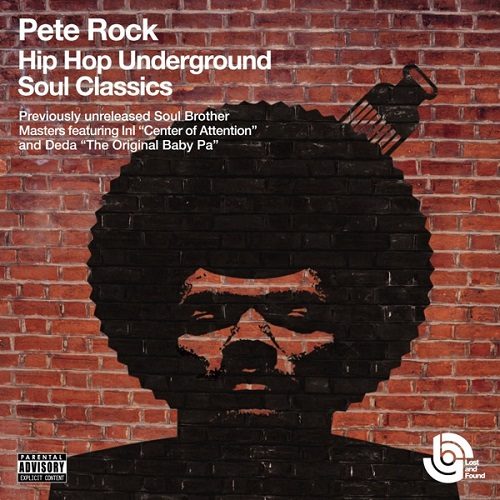 “Lost and Found” dropped in the fall of 2003, not surprisingly, to little fanfare. In fact, for those who aren’t firmly-rooted in the underground scene (and even for some of those who are), this release slipped well under the radar. But, in light of the low-key, anti-flossing path Pete Rock’s career has followed, it’s only fitting. Although Pete is considered by many the only worthy challenger to DJ Premier’s throne as greatest (underground) producer, his list of production credits is notably short for an artist of his reverence, with only three full length LPs under his belt, and random outside production limited to a select few.

While many of his contemporaries saturated the scene with an over-abundance of beats, and sometimes compromising quality in the process, Pete Rock has produced nothing but aural gold in his decade-and-a-half behind the boards. All the more impressive is that the work generally regarded as Pete’s masterpiece with partner C.L. Smooth, “Mecca and the Soul Brother,” managed to garner such acclaim in 1992, the middle year of the late-80s, early-90s golden era of hip hop – an era marked by creativity and a reverence for jazz and soul sounds of the past.

But somewhere in the mid 1990s, Pete Rock seemed to almost disappear. While a premium was placed on shiny suits and sub-par output (at least by labels and radio listeners), artists like Pete Rock who produced the good-ol’ sounds were all but ignored. Indeed, no substantial work is credited to Pete Rock between his final LP with C.L. in 1994, “The Main Ingredient,” and his compilation-like release from 1998, “Soul Survivor.” Well, there was no substantial work credited to Pete Rock for that four year period, until he hooked up with BBE and finally released two previously-shelved, full-length LPs: “Center of Attention,” with a pair of MCs known as InI, and “The Original Baby Pa,” with verbals provided by one-time Pete pupil Deda.

InI, Pete Rock’s brother Grap Luva and Rob-O, is also symptomatic of a problem that has plagued Pete throughout the majority of his career: His production far outweighs the talents of the respective MC he’s lacing. While none of the various MCs for whom Pete has produced have ever severely crippled a Pete Rock listen (his skills are literally too good to allow for that), few have helped do him the lyrical justice he deserves. Though Grap Luva has improved from the days of laughable freestyles (see the track following “T.R.O.Y.,” from “Mecca”), and he and Rob-O actually compliment each other fairly well with well-delivered lines as well as accepting their own limitations as rappers, neither is a heavyweight on the mic. That is, in essence, the most one can hope for from an MC on a Pete Rock track; unless you’re Nas or Common Sense, don’t try to match the potency of the beat.

All of this, and “Center of Attention” still nearly qualifies as an instant classic (or, at least an eight year delayed classic). The beats are nothing short of the perfection we’ve come to expect from Pete Rock. The bass lines are smooth as silk; the drums kick, crash, and pop; the occasional string sample spices the flavor; and, of course, it wouldn’t be a Pete Rock release without a fair share of the most soulful horns you’ll hear this side of OutKast’s “The Way You Move.” While the highlights are tough to pick out simply because the entire album is that good, “To Each His Own” will strike a chord (no pun intended) with many based solely on the guest appearances of Q-Tip and Large Professor, friends of Pete and two crucial contributors to the aforementioned golden era in their own right. Whether it’s both string and horn stabs on “Step Up,” somber piano keys on “Center of Attention,” or the subtly uplifting bass riffs of “What You Say,” Pete Rock buoys this release with a barrage of different sounds and samples that keep each distinctively fresh, yet manages to mesh them together seamlessly. And, though the horn is undoubtedly the trademark sound of the living legend, he is in no way a one-trick pony, even showing his penchant for the scratched-in vocal sample, opting to use Notorious B.I.G.’s infamous “Damn right I like the life I live!” line from “Juicy” on “The Life I Live.”

This release was, in many ways, the original anti-Jiggy release; the lone single, fake thug call-out-anthem “Fakin’ Jax,” addresses the gangster fronting and general decadence long before doing so became a staple for underground acts to allocate half of their albums to such duties.

The second disc of this duel album treat is Deda’s “The Original Baby Pa,” and while it doesn’t quite live up to its counterpart, this album is very good in its own right. However, it is Pete’s Achilles heel, his settling to work with sub-par or average rappers, that is far more evident in his work with Deda. Deda’s voice and flow are decent enough to warrant a career, though his abrasive voice and somewhat simple, repetitive flows will wear pretty quickly on most listeners – so much so that even hearing the usually-dull Pete or some random guest appearances on the mic provides a refreshing breather, like on the soothing organs of “Marked4Death.” Elsewhere, the horn stabs are subtle and aplenty on both “Blah Uno” and “Baby Pa,” the quick guitar riffs enchanting on “Everyman,” and stand-up bass line on “I Originate” head-nods inducing. There is one horrid mistake on “The Original Baby Pa,” and that is the inclusion of Pete Rock’s shameful attempt at creating an R&B beat on “How I’m Livin’.” Perhaps a fledgling gasp at garnering some popular attention or just an experiment gone awry, “How I’m Livin'” is one of the few Pete Rock joints that might qualify as altogether forgettable.

That these two albums never saw the light of day until Pete Rock worked out a deal with British distributors BBE is both sadly ironic and a embarrassing indictment of tastes past. The fact that a living hip hop legend had material scrapped while he was in the prime of his career speaks volumes on just how twisted the industry-end of hip hop was at one point. Regardless, these two releases, now packaged as one, are upon us, and though the past can’t be amended, the present now bears a special treat. That Pete Rock can consistently flip albums featuring the rhymes of average MCs into classics or near classics tells us everything we need to know. Do yourself a favor and make up for lost time by adding this must have to your collection – they were Lost Classics, until now.