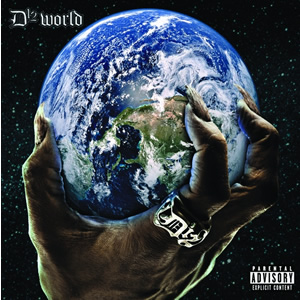 Eminem had a master plan. A plan for taking over the world of hip-hop. One man alone can’t take over the world though, even if he is “Superman.” To conquer the world of hip-hop, a general needs an army. Eminem’s army is D12, and three years ago they invaded the world on “Devils Night.” A funny thing happened along the way – the army proved they were just as capable of taking over the world, with or without Commander Marshall. In fact they had been leaders all along, just unrecognized in the global hip-hop scene until group member Eminem struck gold in the rap world and became famous. Bizarre, Proof, Kuniva, Kon Artis and Swifty McVey all held the potential to take over the rap world in their own right, and “Devils Night” finally gave them the chance to show and prove it.

The hardest thing to do any battle, be it armed conflict with guns or rap conflict with microphones, is follow-up success with continued victories. D12 and Eminem decided patience was the better part of valor, and waited a long time to release “D12 World” to ensure that their vision of hip-hop would win out over other artists in the field. The first salvo fired from “D12 World” is something of a sneak attack. “My Band” is a perplexing song – you laugh the first time you hear it, kinda like it for a while, get sick of hearing it on TV and radio all of the time, and then start to like it again anyway. At times the song seems incapable of being impactful sans the music video and all of its hilarious sight gags, but on closer inspection the lyrics hold up in humor on their own:

Proof: “Ready to snap on a dumbass fan
Every time I hear (Hey dude I love your band!)
We ain’t a band bitch, we don’t play instruments
So why he get 90 and we only get 10 percent?
And these guys acting funny every area code
(Proof carry my bag) bitch carry your own
Can’t make it to the stage, security in my way
(Who the fuck are you? Where’s Obie and Dre?!)”

Bizarre: “For the media, I got some suggestions
Fuck Marshall! Ask us the questions
Like who’s D12? How did we get started?
(What about Eminem?) Bitch are you retarded?!
Anyway, I’m the popularest guy in the group
Big ass stomach, bitches think I’m cute (hey sexy!)
50 told me to do sit-ups to get buff
Did two and a half and then couldn’t get up
Fuck D12! I’m outta this band
I’m gonna start a group with The Real Roxanne”

“My Band” has the potential to be D12’s biggest hit to date, thanks to the humor displayed by all the members and Eminem’s excellent beat. It also makes the point, albiet self-deprecatingly, that Eminem is perceived as the leader of the group. Whether D12 or even Eminem wants the responsibility, the burden for whether this army of Detroit MC’s loses or wins the rap wars rests squarely on his shoulders. Rather than shy away from this heavy load, Eminem seems to have stacked on even more weight by producing six of the tracks on “D12 World.” Kon Artis, a.k.a. Mr. Porter, only produces three by comparison. Other well known hip-hop musical masters weigh in throughout. Kanye West handles the excellent title track. The Trackboyz do “40 Oz.,” the B-Side to the “My Band” single. It wouldn’t be an Eminem or D12 album without a Dr. Dre beat, and he obliges by producing the ominous “American Psycho II” featuring B-Real. Hi-Tek even gets a piece, producing the quixotically light-hearted and dark sounding “Just Like U.” Whether you love him or hate him, Bizarre still tries to make you laugh on the latter by saying some of the foulest shit in all of hip-hop:

“You don’t wanna be just like your daddy
Pimpin hoes, out here drivin Caddy’s
Runnin around town, fuckin with skeezers
Shots in your ass, catchin diseases
Son – your daddy got a foul mouth
For fuckin – bitches in they foul mouth
I can’t help it, my group’s D12
All we do is pop pills and stay in jail”

It actually gets more graphic than that, but this reviewer would prefer NOT to go there. “D12 World” clocks in at nearly 80 minutes, which is pretty impressive when you consider that there are only four skits. More isn’t necessarily better though. Military history has shown many times that a smaller and more mobile army can surprise a larger and more encumbered force and snatch up a victory. Even with Eminem trying to carry so much of the weight for his group, 80 minutes is too much of a burden for anyone to bear. At some point the group starts to suffer from songs that aren’t whack per se, but still relatively uninteresting. For a long stretch of the album, from track 7’s “U R the One” until track 13’s “Bitch,” nothing captivates the listener or really stands out. To D12’s credit they have enhanced this album by throwing in a special edition DVD with extra stuff to entertain you, but in their latest attempt to conquer the globe “D12 World” doesn’t really win or lose – it just holds the ground “Devils Night” already took.